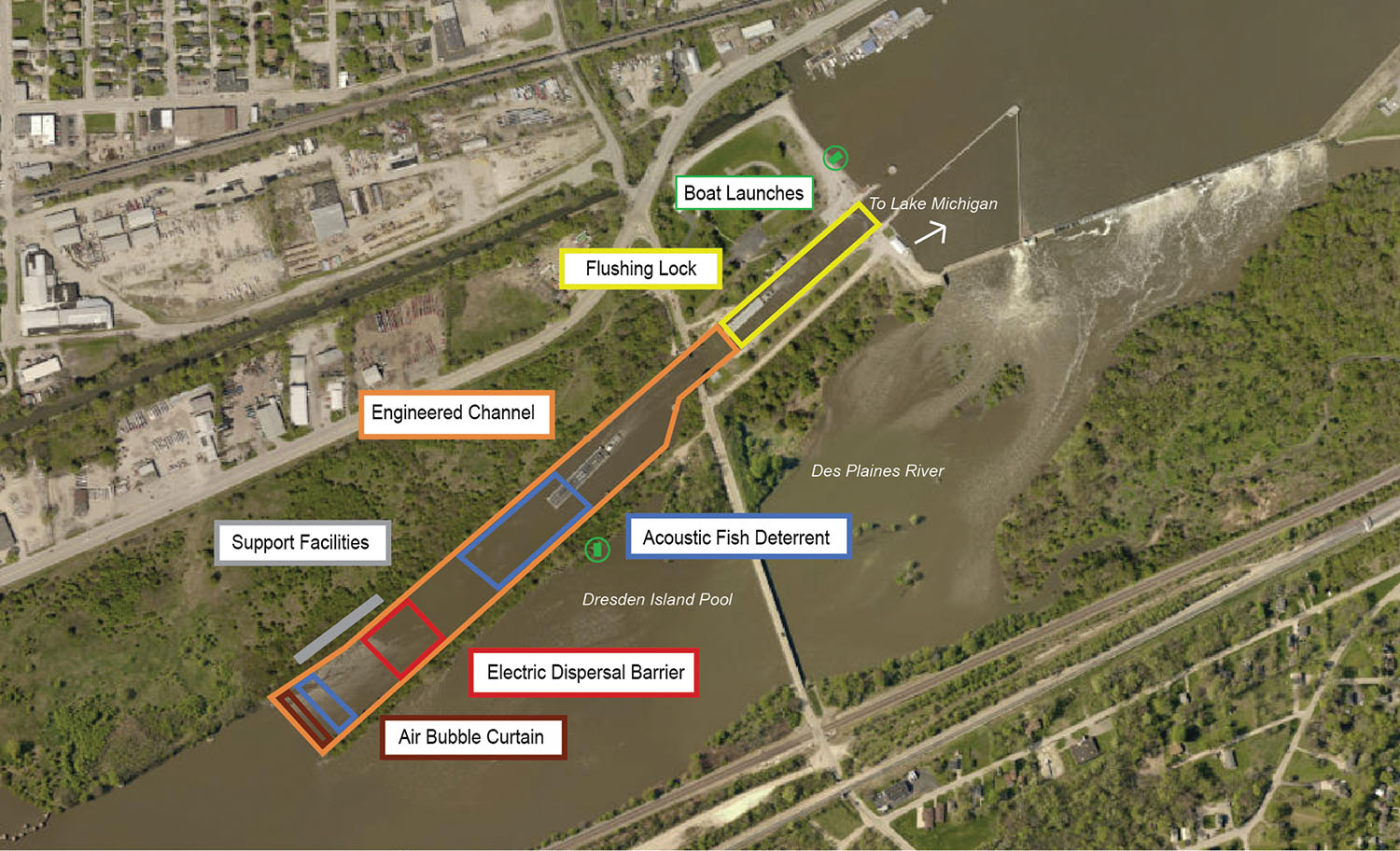 An influx of federal funding is allowing the completion of preconstruction engineering and design work and construction of the initial phase of the Brandon Road Interbasin Project, with the first project contract expected to be awarded in 2024 as long as partnering states are able to provide the matching funds.

The project, on the Des Plaines River near Joliet, Ill., includes a complex, layered barrier to prevent the spread of invasive carp and other nuisance aquatic species from the river into the Great Lakes. It consists of an engineered channel with a flushing lock, an air bubble curtain and an acoustic deterrent, all designed to work in tandem with an electric barrier in place in the Chicago Sanitary and Ship Canal in Romeoville, Ill., southwest of Chicago. The total cost for the project is expected to be at least $858 million, with an expectation that the cost may rise over time. Brandon Road Lock and Dam has been identified previously as a key choke-point where Asian carp must be stopped.

During a quarterly webinar update from the Rock Island District on April 13, project manager Andrew Leichty Sr. said $226 million from the Infrastructure Investment and Jobs Act and another $47 million proposed in the president’s fiscal year 2023 budget would keep the project on track to allow targeting of the first construction contract to be awarded by August or September 2024.

“That is contingent on having a project partnership agreement in place to do that,” he said.

The project requires a non-federal sponsor to complete the 20 percent of the match required under the 80/20 federal/state funding arrangement for it. However, in December, the Council of Great Lakes Governors sent a letter to congressional infrastructure leadership seeking full funding in the 2022 Water Resources Development Act for the project. They wrote that the funding was “beyond the capacity of the Great Lakes states to match.”

Leichty said the schedule calls for the sponsorship agreement to be signed in December, but that it could be delayed if WRDA legislation including the states’ portion of the funding does not materialize by that point.

If the state funding for the project emerges, the appropriated federal funds will allow not only for the completion of the design but the construction of all portions of the project contained in “increment one.” That phase includes site preparation, rock excavation, installation of an air bubble deterrent and narrow acoustic deterrent array as well as construction of a control building and upstream boat launch.

“It’s very exciting to have these federal funds in place to move into the construction phase,” Leichty said. “This is a great step forward.”

Following the funding announcement, Sens. Dick Durbin and Tammy Duckworth of Illinois visited the Brandon Road Lock and Dam to get an update on the project and see firsthand where features would be constructed.

Collaborative efforts, including a value-based design charette in January and a navigation workshop in February, were also held, the district reported in its quarterly newsletter on the project. Discussion during the design charette focused on support buildings, equipment, site operations, utilities and future considerations.

At the navigation workshop, the team shared a finalized Engineering and Evaluation Report (EER), which used information and proposals gathered during multiple design charrettes, ongoing modeling and analysis, navigation workshops and design team meetings to evaluate various layouts for the engineered channel. The group then narrowed the layout options. Modeling and testing will be used to analyze their impacts and effectiveness through the remainder of this year, the Corps reported.

“They are currently ahead of schedule for this, so this is good news,” Leichty said.

One question from those attending the webinar was how the construction of the interbasin project will affect navigation traffic.

“That’s a great question, and it’s one we’re definitely looking at,” Leichty said.

He added that part of the mission of the project includes minimizing impacts to navigation. However, he said, it was difficult to assess the impact while designers continue to look at design options, including the types of materials that will be used, along with various alignments of the engineered channel.

Rock Island District staff noted that the full closure at Brandon Road scheduled for August 15 to September 4 this year, along with a final restriction period and partial closure September 5-8, are part of the regular maintenance of and not associated with the interbasin project. The work had been originally scheduled to be completed in 2020 but had to be delayed because ethe Corps didn’t receive bids to complete the work at Brandon Road at the same time as repairs to Dresden Lock and Dam were taking place, Darren Melvin, treasurer of the Illinois River Carriers’ Association, said previously. He added that there were a limited number of contractors available to do the work in the region.

Caption for photo: Corps of Engineers graphic shows the many methods by which Brandon Road Lock will prevent passage of Asian carp.