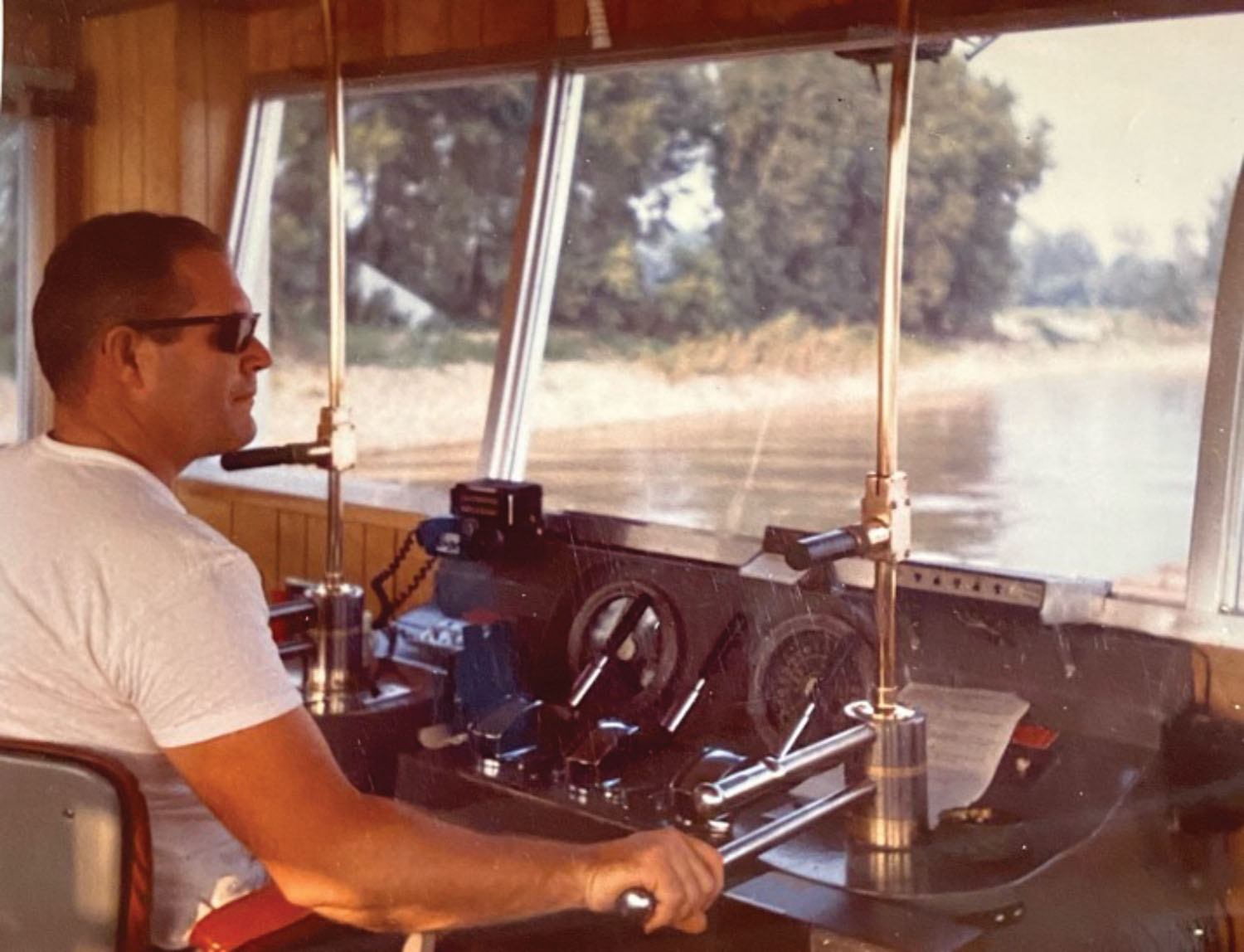 From A Farm Boy To A Master Of Towing Vessels

A Riverman’s Memoir Of His Riverman Father

Editor’s note: Larry Mason Smith passed away March 29 (see WJ, April 18). His son, Capt. Gregory L. Smith of the mv. Randall D. Chamness, one of many pilots and captains trained by his father, wrote this tribute to his father’s life.

It was a decade after World War II, and good-paying jobs were hard to find. No stranger to hard work, he had grown up on a farm in northeast Arkansas, ultimately becoming a sawmiller, cutting cross ties for the railroad. He was a large man with large hands, broad shoulders and a big heart.

Since he was the only Dad I knew, I thought all Dads were big and strong, but I’ll never forget the time I realized that he was not just a normal man or Dad. We had gotten out of church one Sunday morning, and our car was blocked in by a Volkswagen. It was very hot, and the owners weren’t coming, so my Dad just got out of the car, walked around and grabbed the bumper of the Volkswagen, picked it up, walked over to one side, and set it back down. Then he got back into our car and drove off. (I can’t speak for my brothers, but I made the personal decision to become less disobedient and more respectful.)

In the mid 1950s, the timber-cutting business was becoming sporadic due to competition for tracts of viable timber and the need to constantly move to meet the demand. For a young man with a wife and three young sons needing a more stable income, he made the same decision that many country boys from northeast Arkansas and western Tennessee were making. You basically had one of two options: go north to the industrial centers of Rockford, Ill., and Detroit, Mich., or go to work on the river. Only one of those choices did not require uprooting your family. So men like my Dad came to the river from small towns with names like Pocahontas and Black Rock, Ark., or Savannah and Parsons, Tenn. A friend of his named John Gordon had already gotten a job on the river and was working for Rose Barge Lines. John got him hired on as well.

Eventually all rivermen who make a career of it settle into a dual existence: your river life and your home life. For Mason Smith, it was even a little more noticeable than most. He had grown up with only two names because, before Social Security, all you needed was two names, but now he needed a third name, so he legally took the name Larry Mason Smith. That led to everyone who knew him shoreside knowing him as Mason, and everyone who knew him from the river knowing him as Larry (or eventually Capt. Larry).

Having a strong Christian work ethic, he worked hard and became a shop steward in his union, representing the mates at Rose Barge Lines. Unions had accomplished some great things for American workers and their working conditions, but some union officials were corrupted by the power and influence that accompanied that success. My father became disillusioned with unions in general because of some of these corrupt practices and was called to testify against the officials of a particular union under the leadership of Jimmy Hoffa. While waiting in a Chicago hotel room to be called to testify against the union, Hoffa appeared on the evening news, making the statement that, “He couldn’t make people join his union, but he could make them wish they had.” Needless to say, Larry Smith’s enthusiasm for unions dissipated quickly. However, he still managed to become a licensed pilot at Rose Barge Lines on the Illinois River under Capt. Leroy Drury on the mv. Cindy Joe.

He eventually took a job with a small, non-union company, Missouri River Barge Lines, on the mv. Belzoni and mv. Vicksburg, which operated primarily on the Missouri River during the wild west days of the 1960s and early 1970s. At the time, the Missouri River was widely recognized as the most dangerous river to navigate in the country. The current was very swift, and the channel was constantly changing. The Corps of Engineers struggled with trying to maintain a stable channel, and the Coast Guard struggled to keep it marked. Sometimes the channel changed to the other side of the river in a matter of hours. However, freight rates were very good even for the shallower (7.5-foot) drafts necessary for navigation on the Missouri at the time. (This was before the railroads and environmentalists collaborated in a misguided, but fairly successful, attempt to shut down navigation on the Missouri River.)

In the early 1970s, the river industry started a rapid expansion, and another wave of country boys came to work on the river. Many of them were now second-generation rivermen: sons, sons-in-law and nephews became engineers, pilots and tankermen. Many women took jobs as cooks, and a few even began to test the waters to become deck crew and pilots in a very male-dominated industry.

It was this booming environment that led Capt. Larry Smith to begin training pilots. His patience and self-confidence combined with his fierce belief in hands-on experience made him an excellent trainer. His ego did not get in the way of his approach to training. He was not trying to impress cub-pilots with how good he was as a pilot, but rather he wanted to teach them how to develop their own skills as quickly as possible. He did that by putting steersmen “between the sticks” from day one, and yes, we had very sweaty palms.

Even though it was nerve-wracking because we didn’t know what we were doing, we never doubted that he knew what he was doing. His confidence was contagious and led us to develop our own self-confidence.

He would eventually train many pilots who then went on to become captains, leaders and trainers in their own right. Some have become port captains, marine superintendents and other well-respected men of the industry. He was very successful at cloning himself by taking farm boys and making them masters.

He became a heavy tow captain on the Lower Mississippi and served several years as master of the mv. Miss Kae D. He had worked for Rose Barge Lines, Missouri River Barge Lines, Flowers Transportation, Valley Line and a short while at Alter Barge Line before retiring from the river in late 1992. He then served with his wife, Polly, as a sojourner, doing repair and renovation work for Christian and public service organizations across the country.

Capt. Larry Smith was the proud father of four children and five step-children, as well as the husband of the lovely and gracious Pauline Smith, the widow of Capt. C.L. Baughman who had worked for Dravo Mechling before suffering a fatal heart attack. Two sons, one brother-in-law, two nephews, one grandnephew and one grandson followed Capt. Larry’s lead and made careers in the river industry.

He died at his home in Rogers, Arkansas, on March 29, 2022, at the ripe old age of 91. He had worked in the wheat fields of Kansas, worked as a truck driver, timber cutter, sawmiller, carpenter, concrete and brick mason, store operator, river mariner, Bible school teacher, song leader, construction superintendent, cattle farmer and a hay-maker in more ways than one. He did mission work in Brazil, oversaw critical food infrastructure construction in Africa and visited Victoria Falls. He once met Robert Wadlow of Alton, Ill., who was the tallest man in recorded history. He saw the Redwood forests of the American Northwest (a timber-cutter’s dream) and the deserts of the American Southwest.

Through it all, he most identified himself as a “river boat captain” and swapped towboat stories to the very end. The day before he passed, he was dreaming about trying to get into a lock and demanding that someone catch him a line. Perhaps once again, he was feeling the biting cold of the Illinois River in winter, or the smothering heat of New Orleans in summer, but no matter which lock he was making in his mind, he was once again the master of an inland towboat.

His faith in God and belief in the resurrection never wavered. Since there are rivers in Paradise, then surely pilots will be needed to navigate them. Knowing him like I do, he will be the first to volunteer.