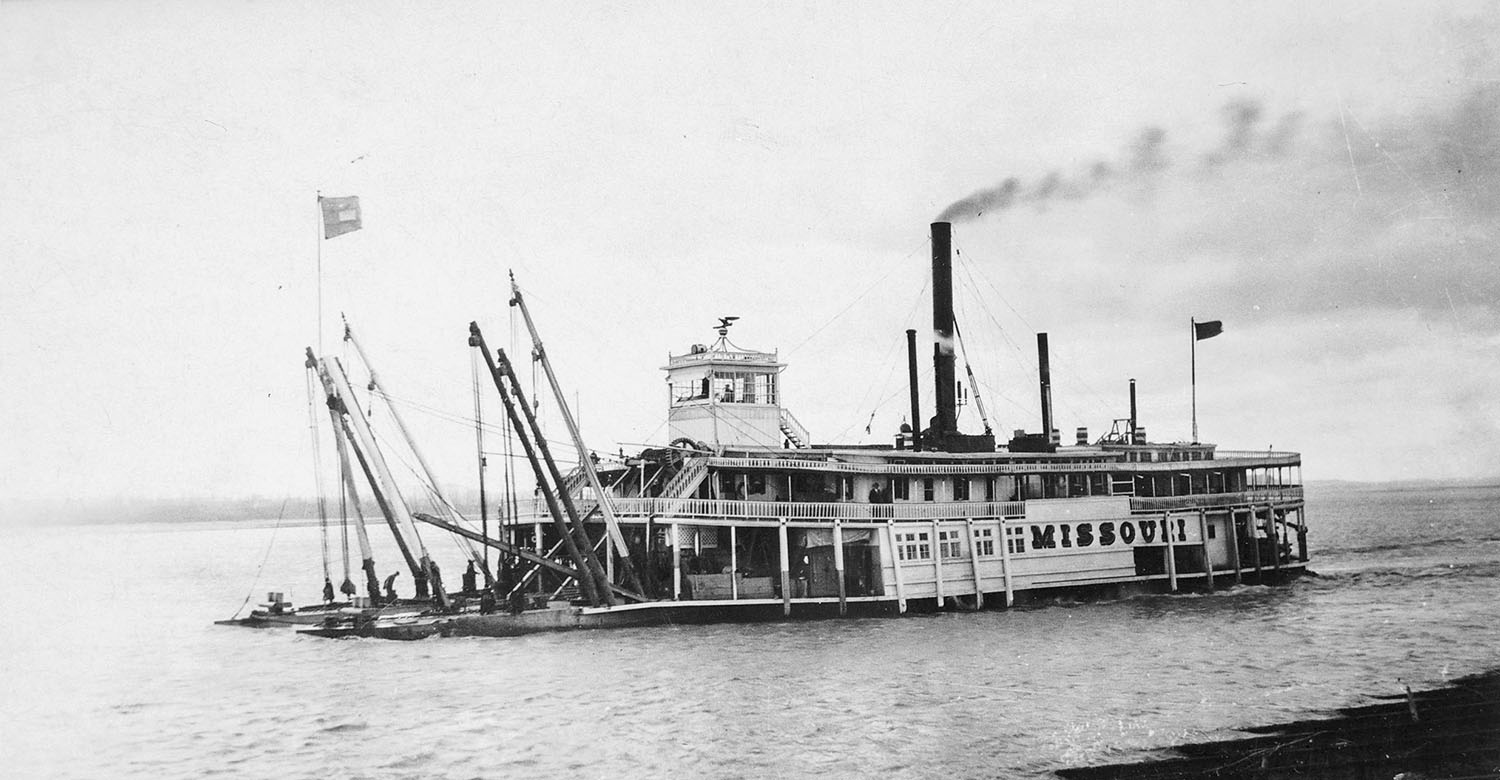 Mention was made last week of the snagboat Missouri clearing the wreck of the Str. Elisha Woods. Snagboats are a nearly forgotten, though once very important, fixture on the navigable rivers. In the era of wooden hulls, trees and snags protruding from the river bottoms could and did impale and sink many early steamboats.

Capt. Henry Miller Shreve had been involved in the construction of the packet Enterprise at Wheeling, Va. (later W.Va.) in 1814, and the Washington in 1816. Through these vessels, the Fulton-Livingston monopoly on the operation of steamboats on the waters of Louisiana was broken. The design of the Washington also set the precedent for future Western Rivers steamboats, with the boilers on the main deck, rather than in the hull.

In 1826, Shreve was appointed superintendent of Western Rivers Improvements. He is credited with designing the first snagboat, named Heliopolis, which served as the forerunner of many to follow that the government utilized to enhance safe navigation on the river system.

The snagboat Missouri was built at Pittsburgh in 1888 by the James Rees & Sons Company for the Missouri River Commission and was originally named C.R. Suter. The vessel was constructed with an iron hull and equipped with compound oscillating engines. Way’s Packet Directory states that the piston rods connected directly to the cranks, and the cylinders oscillated on trunnions. Way’s Steam Towboat Directory says that the boat was towed to St. Louis for completion, with the towboat Pacific making the delivery to Point Pleasant, W.Va., and the Huntington & St. Louis Towboat Company (owners of the Wash Honshell detailed in the May 9 issue) then delivered it to Cairo with the St. Louis & Mississippi Valley Transportation Company making the final delivery to St. Louis.

After a rebuilding in 1908, the boat was renamed Missouri. It continued to work in the Engineers’ Kansas City District, and was stationed at Gasconade, Mo.

The photo of the Missouri moored in the Gasconade River is overlooking the Engineer facility and shipyard at Gasconade. The Engineer Department built many vessels at this location over the years. The marine ways are still visible today, but most of the property resembles a ghost town, with empty structures and even houses standing in abandonment, yet hinting at a once vibrant era. The Corps still occasionally utilizes the moorings just inside the mouth of the Gasconade River.

It was at this location that the Missouri burned on July 28, 1928, resulting in a total loss. The wreck was dragged 2 miles down the Missouri River and sunk behind a dike. This dike later degraded, exposing the wreck, and the dredge Kappa completely disposed of it in 1929.

General improvements to navigation channels, as well as the shift to steel hulls rather than wooden construction, gradually lessened the need for dedicated snagboats to clear the rivers of these obstructions. There are two surviving Corps of Engineers snagboats preserved as museum vessels. The steam, sternwheel Montgomery, built in 1925 and retired in 1982, is on display just above the Tom Bevill Lock & Dam at Pickensville, Ala., on the Tennessee-Tombigbee Waterway. The other is the steam, sternwheel W.T. Preston, built in 1929, retired in 1981 and on display in Anacortes, Wash., on the West Coast.

Correction to the May 9 column: The Catlettsburg First Methodist Church was originally the ME Church SOUTH, not North as originally stated. Capt. Honshell not only arranged for transport of the church bell, but personally paid for it as well.