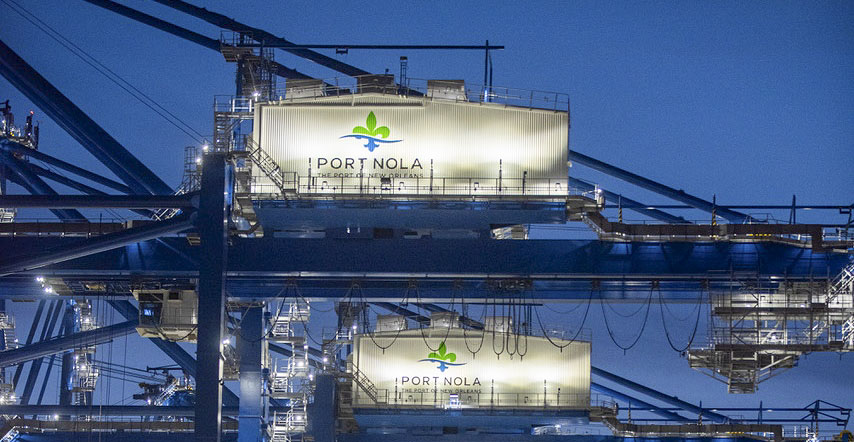 Officials from the Port of New Orleans (Port NOLA) are celebrating the commitment of $96.5 million for port-related projects from the 2022 regular session of the Louisiana State Legislature. The funding will benefit a wide range of projects at the port’s Napoleon Avenue Container Terminal and the Jourdan Road Cold Storage Terminal, along with roadway projects in Orleans and St. Bernard parishes.

“On behalf of the board of commissioners of the Port of New Orleans, we thank Louisiana Gov. John Bel Edwards, legislative leadership and our delegation members from Orleans, Jefferson and St. Bernard parishes for their vision and support,” said Brandy Christian, president and CEO of the Port of New Orleans and CEO of the New Orleans Public Belt Railroad. “Together, these projects will position Port NOLA to take full advantage of current cargo opportunities, including serving as an alternative gateway to the West Coast, while preparing infrastructure to meet the needs of tomorrow.”

The state appropriated $8.1 million to the terminal, located where Napoleon Avenue meets the river. That allocation completes the Louisiana State Legislature’s $28.1 million commitment to the expansion project, which totals $120 million in all. In December 2021, the port took delivery of four new 100-gauge container gantry cranes, which will be operational at the Napoleon Avenue Container Terminal next month. The new cranes will work alongside the port’s two existing 100-foot-gauge container cranes and three 50-foot-gauge container cranes, which will now focus on servicing smaller vessels and the container-on-barge service that runs between Memphis, the Port of Greater Baton Rouge and New Orleans.

The Louisiana State Legislature committed close to $8 million for the completion of Lineage Logistics’ $49 million expansion at the port’s Jourdan Road Cold Storage Terminal, located in eastern New Orleans on the Gulf Intracoastal Waterway and the Inner Harbor Navigation Canal. The state has put a total of $11 million toward the project, which will grow the facility’s refrigerated storage space from 160,000 square feet to 304,000 square feet. Ground was broken on the project in April 2021, with completion set for next month.

The largest two commitments from the state will go toward roadway projects. The Louisiana State Legislature committed $50 million to begin work on the St. Bernard Transportation Corridor, which will include an elevated roadway that will lead from the north side of the port’s planned Louisiana International Terminal in Violet, La., over the Forty Arpent Canal and connect with I-510, which goes north to connect with I-10. The commitment from the state will cover planning, design and engineering for the roadway.

The Port of New Orleans is in the midst of planning and permitting for the $1.5 billion container terminal in St. Bernard Parish, which will alleviate the air draft restrictions associated with the Crescent City Connection bridge that limit the size of vessels that call on the existing Napoleon Avenue Container Terminal.

Finally, the Louisiana State Legislature committed $30.5 million for the complete rehabilitation of the St. Claude Avenue Bridge, a four-lane bascule bridge over the Inner Harbor Navigation Canal (IHNC) just riverside of the IHNC Lock. The bridge was built in 1919, the same year Congress ratified the 18th Amendment to the Constitution, which began the Prohibition era.

About 21,000 vehicles use the bridge daily, and the bridge has to open for every vessel that transits the IHNC Lock, which is the lone point of access on the east bank of the Mississippi River for the Gulf Intracoastal Waterway. The project will rebuild the bridge in place, while also installing advance traffic warning signs and widening pedestrian and bicycle pathways.

In addition to the legislature-supported projects, Port NOLA announced it is moving forward with a $44 million rehabilitation of the Almonaster Bridge, another drawbridge that crosses the Inner Harbor Navigation Canal. The bridge, which is used by the CSX railroad, has been closed to vehicular and pedestrian traffic since 2005. The project will reconnect traffic on Old Gentilly Road. The project has received $20 million in federal highway funds, along with a $1.5 million commitment from the city of New Orleans. The port will cover the remainder of the cost.