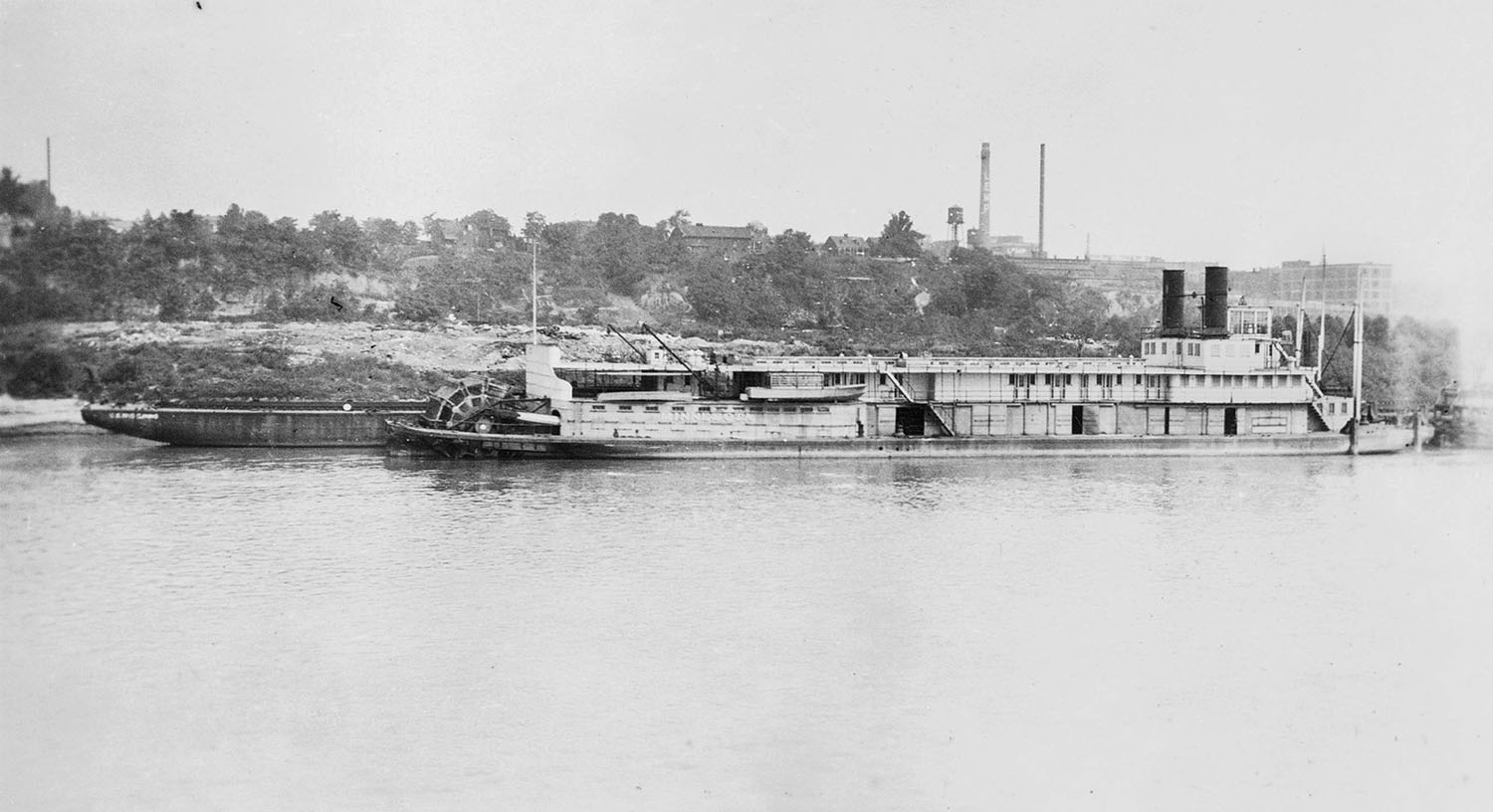 In 1919, the U.S. government entered into a contract with Edward F. Goltra whereby four large towboats and 19 barges were to be built, paid for by the government with the Chief of Engineers, U.S. Engineer Department acting as lessor, leasing the vessels to Goltra to operate as a common carrier for a term of five years from the date of delivery of the first vessel.

The towboats, designed for Upper Mississippi River service, were built in 1921 at Stillwater, Minn., by the Marietta Manufacturing Company of Point Pleasant, W.Va. These boats were large, steam sternwheel vessels measuring 230 by 58 feet, with engines 24’s, 48’s with an 8-foot stroke. The boilers were oil-fired. The sternwheel was 24 feet in diameter and 38 feet long, having 12 buckets with 4-foot dip. The names selected for the boats were Illinois, Iowa, Minnesota and Missouri.

After many delays, the Goltra Line finally began operations in the summer of 1922. The boats experienced some mechanical difficulties, and low water further hampered operations. Late in the fall of that year the fleet went into winter quarters at St. Louis. Before work resumed in the spring, Mr. Goltra was notified on March 4, 1923, by the Secretary of War that the lease was being terminated. The entire fleet was repossessed by General Thomas Q. Ashburn, head of the Inland Waterways Corporation, for the use and benefit of the U.S. government under the direction of the acting Secretary of War on March 25, 1923. A long legal battle ensued that was not entirely settled until 1941, two years after the death of Mr. Goltra. Legal documents show that while there was a provision within the contract for termination due to non-performance, the termination should have been by the Chief of Engineers, rather than by the Secretary of War.

At any rate, the boats were placed into the growing fleet of the Inland Waterways Corporation, created by the government for the purpose of revitalizing river transportation and commonly called the “Federal Barge Line” by rivermen of the era. These four boats became known as the Federal “state” boats, and in the 1930s all four were converted from sternwheel to twin prop, but remained steam-propelled. The machinery installed during this conversion was triple expansion condensing, 16’s, 26’s, 32’s – 24-inch stroke rated 2,400 hp. at 185 rpm. The props were 8 feet, 8 inches in diameter. The Minnesota, the particular focus of this column, underwent this conversion in 1930-31.

According to Way’s Steam Towboat Directory, masters that served on the Minnesota after the conversion included J. Wylie Leek, Carl R. Cutting and J.F. Browinski Jr.

During World War II, the Minnesota was noted for delivering submarines from Lockport, Ill., to New Orleans. Following the war, the boat was often mentioned in the news columns of The Waterways Journal as being in Missouri River service, and in the winter of 1950-51 it had been ice-bound on the last trip of the season, becoming trapped for several months. After resuming service in the spring of 1951, the Minnesota was moving near-record tonnage on the Missouri.

Seventy-one years ago this week, on June 21, 1951, the Missouri River was on a rapid rise, and the Minnesota was downbound out of Kansas City with a tow of three grain loads. These loads were oversized barges that were long operated by Federal. Capt. Leonard Thompson, master of the boat, was on watch late in the evening as the tow approached the Sibley, Mo., railroad bridge at present day Missouri River Mile 336.2 and proceeded to flank through the bend and bridge. According to a story in the June 30, 1951, issue of The Waterways Journal, Capt. Thompson was ”driving the boat hard” as he came out of his flank, and the tow cleared the left descending bridge pier, but the port side of the boat rubbed as it passed through. It was soon discovered that the engineroom was taking on water, and the general alarm was sounded. Within 30 minutes the big boat was beached stern first at Fire Prairie Creek (often referred to today as simply Fire Creek), on the right bank about 5 miles below the bridge. The three loaded barges, which had broken loose from the boat, were eventually rounded up by Corps vessels from Napoleon, Mo., the last being captured some 40 miles downstream. No crew members suffered injuries, and according to the Journal article, since the boat initially sank with only the main cabin under water no one “lost as much as a toothbrush,” and passengers were able to walk off to the bank “almost at leisure.” Five crewmembers, however, did have a harrowing ride downstream on the barges that broke free.

The rising river made salvage of the Minnesota impossible, and before the crest of the rise only the tops of the two smokestacks were visible. Some time later, the upper works of the boat were removed to below the waterline, and today no trace of the Minnesota can be seen.

At least one piece of the massive boat remains, a very large guard light that Capt. Bill Burnett has mounted on his back porch at Boonville, Mo.

Capt. Leonard Thompson continued his career with Federal, serving a decade later as master of the America and United States.