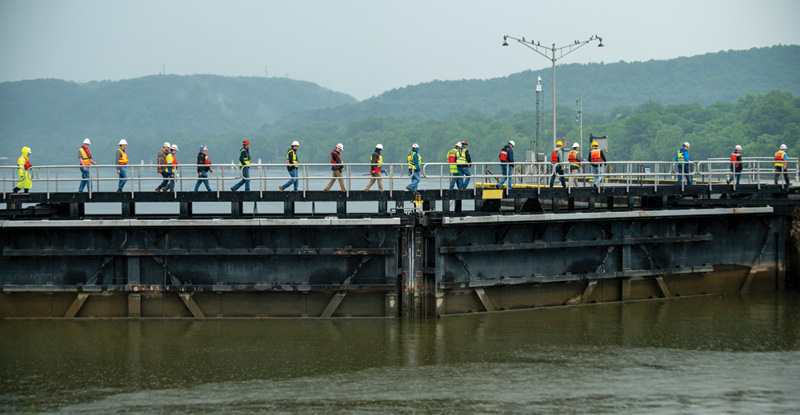 The Pittsburgh Engineer District hosted the event June 7 at Montgomery Locks and Dam in Monaca, Penn., to allow contractors to clearly understand the multi-year construction project prior to it being advertised, as well as to get feedback about potential construction methods.

The project at Ohio River Mile 31.7 will replace the Montgomery Locks and Dam’s 360-by-56-feet auxiliary chamber with a 600-by-110-feet chamber, the same configuration as Montgomery’s existing main chamber.

The existing locks, which are some of the oldest and smallest on the Ohio River, were built between 1932 and 1936. When the main chamber is closed, the auxiliary chamber can fit only one barge at a time, meaning a towboat pushing nine barges might take nine hours or longer to pass through the lock instead of 20 or 30 minutes.

Dening called the existing locks a “bottleneck” for the river.

One of the ways the lock replacement project is unique is that, although a smaller site development contract to build a concrete batch plant on adjoining property will be bid out this fall, the contract to replace the lock chamber will not be done in phases. Instead, it is a single eight-year-long contract.

The project is also fully funded. The Infrastructure and Investment Jobs Act allocated $857.7 million specifically to Montgomery and the Upper Ohio Navigation Project to fund work at multiple sites. The magnitude of the Montgomery project alone is more than $500 million.

“It is a once-in-a-generation kind of event for us,” Dening said. “Having this kind of commitment of funding is definitely helping our planning and execution.”

Challenges to the project include electricity coming from the far side of the river and the increased size of the new lock chamber making it necessary to make modifications to the dam, Dening said.

“Eight years is a long time for a single contract,” said Kirk McWilliams, the area engineer for the Pittsburgh Engineer District. “The contractor community’s input and feedback are critical in our ability to deliver a construction project of this magnitude.”

The Corps expects to solicit proposals for the work at Montgomery beginning in fall 2023 and is scheduled to make an award in spring 2024. With an estimated eight years of construction, the earliest online time for the new lock would be in 2032, Dening said.

The Corps of Engineers estimates that each year, Montgomery Locks and Dam contributes $180 million in economic savings for industries that would otherwise transport freight by trains or trucks, which are substantially more expensive.

“We are proud to deliver a world-class facility to the nation that minimizes future operation and maintenance expenses and reduces transportation expenses,” said Cory Morgan, the lead engineer for the project with the Inland Navigation Design Center, which designed the lock.

He added, “Close coordination with the navigation industry and construction contractors is vital to the success of the project and a priority for navigation on the upper Ohio River.”