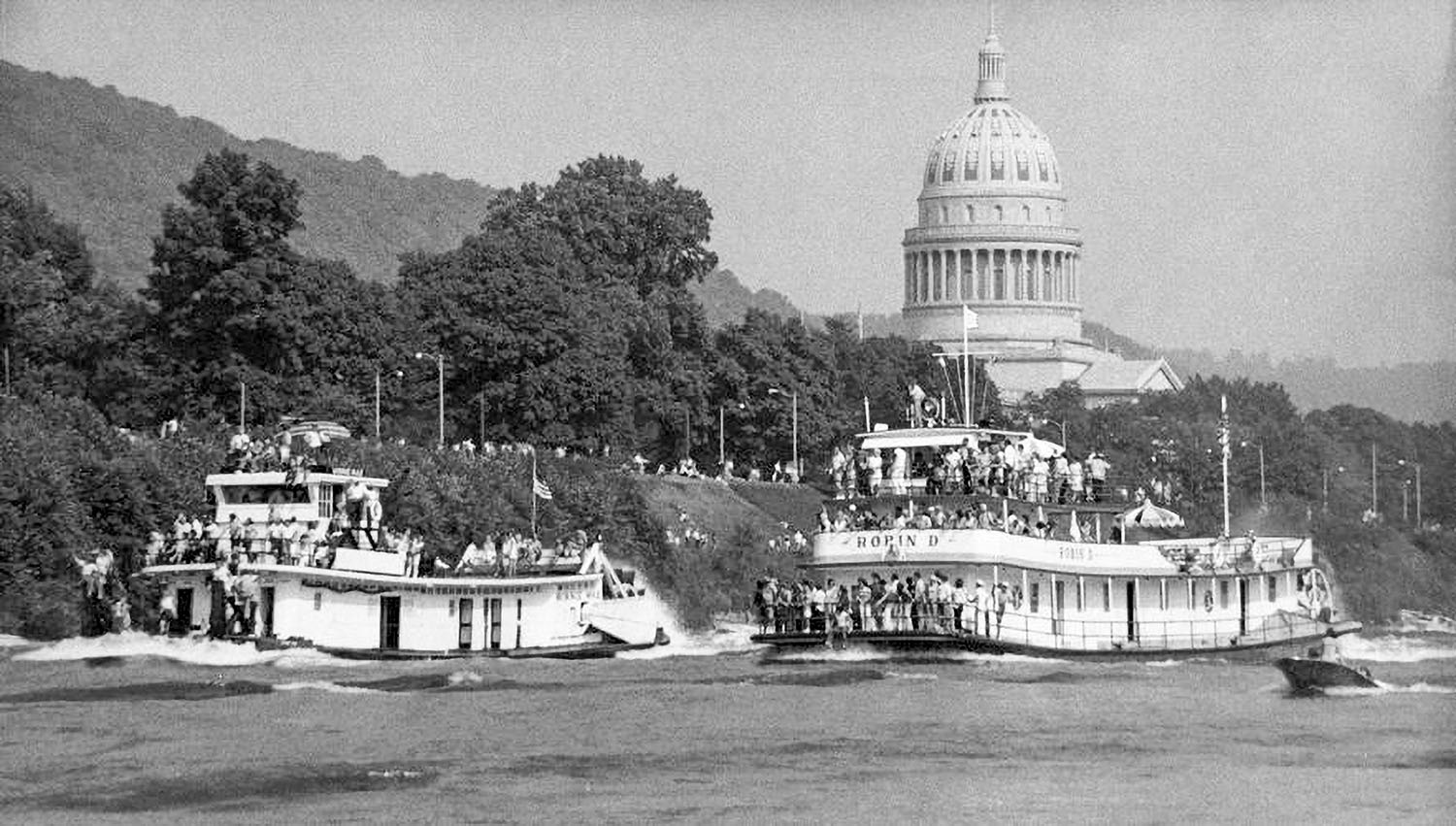 After a 14-year absence, the Charleston, W.Va., Sternwheel Regatta has returned to the Kanawha River, and it took place over the Fourth of July weekend. The once enormously popular event began in 1971 when 13-year-old Nelson Jones arranged a meeting with Mayor John Hutchinson and made a pitch that a sternwheel boat race sponsored by the city would be a good idea. Jones’ inspiration for the event came from the steamboat races held at Charleston between boats of Amherst Barge Company and Armco Steel in the early 1950s and the diesel sternwheel race between White Brothers Construction Company’s W.C. White, with Capt. Harry White, and Point Towing Company’s Helen Z with Capt. Bob Bosworth as part of the West Virginia Centennial celebration in 1963.

Jones was successful in selling his idea to the mayor, and a race was arranged. Unlike the days-long event that the Regatta became, the first featured just a few boats, and only one race was run. The publicity was good, and the crowds lining the banks at Charleston were large. The two largest boats, evenly matched and attracting the most attention, were the Winnie Mae and the Robin D, and they were joined by the Laura J, Claire E and Momma Jeanne. The Winnie Mae, with Capt. Harry White, was declared the victor after having edged out the Robin D, being piloted by Capt. Bert Shearer. While all of the boats in the race that day had a rich history, this column will focus on the two larger boats.

The Robin D originally had been constructed in 1928 by the Charles Ward Engineering Works at Charleston, W.Va. The boat was for the Corps of Engineers, Louisville District, and was named Tecumseh. The sternwheel vessel had a steel hull 110 by 23 feet and was powered by a Lombard diesel engine of 300 hp. at 400 rpm. Drive to the sternwheel was electric.

In 1950, the Tecumseh was sold at a public sale to the Harry F. White Company, Belle, W.Va., who changed the name in 1954 to W.C. White. White utilized the boat in the marine construction trade. It last appeared as the W.C. White in the 1967 edition of the Inland River Record, and the boat lay partially dismantled at the White landing at Witcher, W.Va., on the Kanawha River.

In early 1971, the remains of the W.C. White were sold to P.A. “Pete” Denny of Dunbar, W.Va., a friend of Capt. Harry White. Denny stripped the boat to the hull and rebuilt it into a private pleasure boat. Some river relics found their way into this project as the pilothouse placed on it was from the little steam towboat Detroiter, which had been built by Howard Ship Yard and Drydock Company in 1929 as the Cop-R-Loy and dismantled by the Whites in 1960. A pilot wheel from the diesel sternwheeler Shirley, long in the fleet of O.F. Shearer & Sons, was installed in the pilothouse. The result was a very attractive boat, powered with a Cat D-342 TA diesel of 250 hp.

After appearing again in the Charleston Regattas of 1972 and 1973, the boat was sold to the New Orleans Steamboat Company, which renamed it Cotton Blossom. They repowered it in 1981 with a 350 hp. Cat 3406TA diesel and sold the boat in 2005 to Tchefuncte River Tours LLC, Madisonville, La. It was again sold in 2016 to William Sherrill, Tuscaloosa, Ala.

The Winnie Mae was built in 1936 by Dravo Corporation, Neville Island, Pa., for the Monongahela & Ohio Dredging Company, Pittsburgh. The boat had a steel hull 90 by 22 feet and had a Fairbanks-Morse diesel of 300 hp. The boat was named after the airplane flown by Wiley Post in the first solo flight around the world in 1933, and a photo of the plane hung in the pilothouse.

M&O Dredging repowered the boat with a Cat D353 diesel of 365 hp. in 1964. The boat was sold to White Bros. Inc., Belle, W.Va., in March 1971. It burned in 1974, and the hulk was sold to Huntington (W.Va.) Asphalt Corporation. It lay at Huntington until sold in 1990 to Lloyd Poore, Madison, Ind., who rebuilt it into a pleasure boat with two decks and pilothouse. It again burned in 1992 at Madison, and it was sold and rebuilt by Jamie and Norma Donahue, Prospect, Ky. It was sold in 2005 to Gus Schaffner, Pittsburgh, who sold it in 2015 to Samuel Evans Jr., Pickwick, Tenn.

Nelson Jones went on to become well known within the inland towing industry, serving with the family concern of Amherst Industries and Madison Coal & Supply Company (today known as Amherst Madison). Under the leadership of Jones and his father, Charles T. Jones, the company grew from a small regional towing company to what it is today with more than 30 towboats as well as large construction and marine repair divisions. Nelson Jones was also an accomplished towboat pilot in his own right, and I was privileged to stand watches with him several times over the years until his untimely death in 2010.