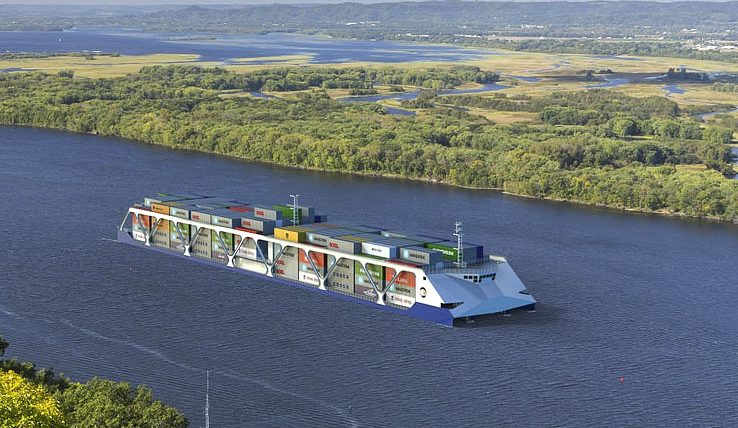 Note: This story has been updated since it was originally posted on July 27. This version includes information on the July 28 PPHTD meeting.

Now, APH is moving ahead with Phase 1 plans to build the first four of its inland container vessels and has begun negotiating with an “existing terminal” that could serve as the initial southernmost hub for moving containerized cargoes between the Gulf Coast and Memphis, Tenn. Phase 2 would bring additional vessels online, with service extending upriver to other ports in the Midwest.

News of the canceled exclusivity agreement broke during the July 14 meeting of the PPHTD board of commissioners—more than a month after APH notified the port’s executive director, Sandy Sanders, of its decision.

About an hour and a half into the meeting, Benny Rousselle, PPHTD commission chair, pointedly asked Sanders if he had anything more to report to commissioners.

“Through their developer, they say that American Patriot—” Sanders began.

“Their developer has intimated to us that, once the land is purchased, they will come back,” Sanders said.

“Won’t you tell the whole story, Mr. Sanders?” Rousselle asked. “Did you receive a letter on June 7?”

Rousselle then read the letter aloud. The letter, sent from Joseph Gehegan, an executive member of American Patriot Holdings, to Sanders, with the port’s attorney, Kenneth Rathburn, in copy, stated that, “in accordance with the exclusivity agreement dated September 28, 2016” between APH and PPHTD, “APH hereby gives thirty (30) day notice that it is terminating the exclusivity agreement.”

And while the acquisition of the property for the planned container terminal was not mentioned in the June 7 letter from APH to Sanders, the failure of the port and Louisiana 23 Development Company (LA23), the port’s exclusive private development partner, to acquire the land has been a years-long point of contention for APH.

Bob McCormack, also an executive member of APH, explained that, from the start, the economic benefit of the Plaquemines Parish container terminal project was “based on the vision” of the terminal serving as the gateway port connecting the Midwest to containerized goods that would have otherwise come from the West Coast.

“The innovative and patented APH vessels provided the marine link to meet that vision,” McCormack said.

Infrastructure improvements at upriver terminals from Memphis north to the Midwest, along with APH vessel construction, hinged on property acquisition for the terminal in Plaquemines Parish. For years, the last half of 2024 has been the much-publicized startup date for Phase 1 of the terminal. Initially, the plan was for the port to acquire the property, commonly referred to as “Parcel 6.” However, the current plan is for Louisiana 23 Asset Management Group LLC to purchase the land. Both LA23 and the asset management group, which was formed in March, are led by Christopher Fetters.

Just last week, Fetters stated the closing date for acquiring Parcel 6 would be dated July 22. However, when asked on July 26 to verify the closing, Fetters said the acquisition had not yet taken place.

“It has not officially closed as of today, but I expect that will change in short order,” he said.

It’s just the latest delay in the effort to secure property for the terminal.

“In [the second half of] 2020, based on project team planning and assurances from LA23, APH communicated to its upriver port partners that the parcels of land necessary for the container terminal would be purchased by year-end 2020,” McCormack said. “APH, the upriver ports and key [beneficial cargo owners] continued to wait for the land acquisition.”

McCormack said APH leaders were told earlier this year the acquisition would take place February 1. Based on that assurance, APH engaged with shipyards in January to begin working toward construction of its first four vessels.

“Given continued land-purchase delays and the ongoing process of vessel construction contracting, APH began to evaluate if other terminals in the lower river could satisfy at least some throughput requirements for its Phase 1 vessels,” he said.

The tense exchange between Rousselle and Sanders at the July 14 meeting came with the subtext that the commission was supposed to consider renewing Sanders’ contract that day. Instead, the item was deferred to the commission’s July 28 meeting.

During the July 14 meeting, commission members repeatedly raised concerns over the delayed property acquisition, a perceived lack of transparency on the part of the port and LA23, and the potential impact that railcars moving through Belle Chasse at the upper end of the parish could have on quality of life and the ability for residents to move throughout the parish. The current rail line runs alongside Highway 23, which is the primary road in and out of the parish on the west bank of the river.

Countering those concerns were a lineup of stakeholders speaking positively about the project and the current port team, including Sanders. One such stakeholder was Steve Tyndall, vice president for ports and marketing for Andalusian Energy, the terminal project’s new anchor client. Andalusian plans to containerize compressed natural gas (CNG) for export to Central and South America, with textiles imported from those markets.

Tyndall, formerly an executive at the Port of Brownsville, where Andalusian originally planned to have a base of operations, admitted to the commission that change is a given for long-term projects like the one in Plaquemines Parish.

“Like all big projects, schedules change, priorities change, budgets change, and as you know, it can be frustrating at times,” Tyndall said. “But the one thing that can’t change is staying focused on the goal. And that’s where the Port of Plaquemines and Andalusian are the same.

“Together we know that change is inevitable, but growth is optional,” he added. “If the decision to change will not achieve the desired outcome, then we must rethink the motivation.”

Tyndall then praised the commission for not “losing sight of the goal” and “falling victim to project fatigue.”

“And to your credit you have a port director in place that is known and respected within the port industry and a top-notch team assembled to deliver the project,” Tyndall said. “I can tell you that because I have to work with them, and they’re good people. In the end, Sandy Sanders is the guy that keeps things going in that direction. He keeps everybody in line, and he’s the glue that keeps it together.”

When asked about financial backing for Andalusian’s part of the project, Tyndall said that the company’s final investment decision (FID) is planned for December 2022.

When the port commission met July 28, commissioner Stuart Guey offered an amendment to the resolution renewing Sanders’ contract. The amended resolution called for extending Sanders’ contract for an additional three months, rather than the original term of three years. An extensive discussion ensued, with multiple commission members stating they would view the three-month extension as a transitional period, during which time a succeeding port director would be identified. Brian Harold, managing director of APM Terminals in Mobile, urged the commission to retain Sanders, citing continuity as an important factor for advancing the container terminal toward the 2024 operational date.

“When we talk about the timeline, I would just like to say that we have concerns over, if a change does happen, then what happens after that and how much time is lost on this project,” Harold said. “Every month lost and every week lost really just makes this project a little bit less desirable when you look at the competition that’s out there.”

Larger ships are coming to the Gulf and larger ships will come to the Lower Mississippi River if a container terminal is built below the bridge in New Orleans, Harold said.

“I think we all share the idea and view that we would like that facility be in Plaquemines Parish,” Harold said. “I just, again, want to impress upon everyone here the risk associated with losing any period of time to the competition.”

When the resolution came up for a vote, commissioners voted 5-3 to extend Sanders’ contract three months.

McCormack did not comment on the port’s leadership structure, but he did state that APH does not intend to enter into any exclusivity agreements in the future. Instead, APH is focused on building and deploying its first four inland container vessels by the end of 2024. At the same time, APH continues to collaborate with Midwestern ports, terminals and developers for future trade. Financing for Phase 1 vessels is expected by November, with shipyard contracts executed at that time.

“We will plan Phase 2 vessel acquisition for other Midwest ports when we, our shippers and Midwest ports are assured sufficient terminal capacity exists in the lower river to meet service criteria,” McCormack said. “In terms of any impact to economics for the first four vessels, we are in the process of meeting with an existing terminal to determine what capacity constraints exist, if any, and what financial and operational terms can be reached which will ensure efficient operation of APH vessels, including quick turnarounds, which are key to marine supply to the Midwest.”

McCormack, citing a non-disclosure agreement, declined to identify which “existing terminal” APH is negotiating with. At present, the Port of New Orleans (Port NOLA) is the only port with a container terminal on the Lower Mississippi River. New Orleans is pursuing its own new container terminal project as well, with a 1,000-acre site in Violet, La., already in hand.

While Port of New Orleans officials declined to confirm or comment on any talks with APH, they did release this statement: “The Port of New Orleans has invested more than $140 million recently to expand the Napoleon Avenue Container Terminal, and part of that includes a dedicated container-on-barge berth. We are in the business of moving cargo, and we are diligently working to grow all services in the Port NOLA gateway.”

Caption for top photo: This is a rendering of the vessel American Patriot Holdings plans to use to transport containers on the inland waterways.