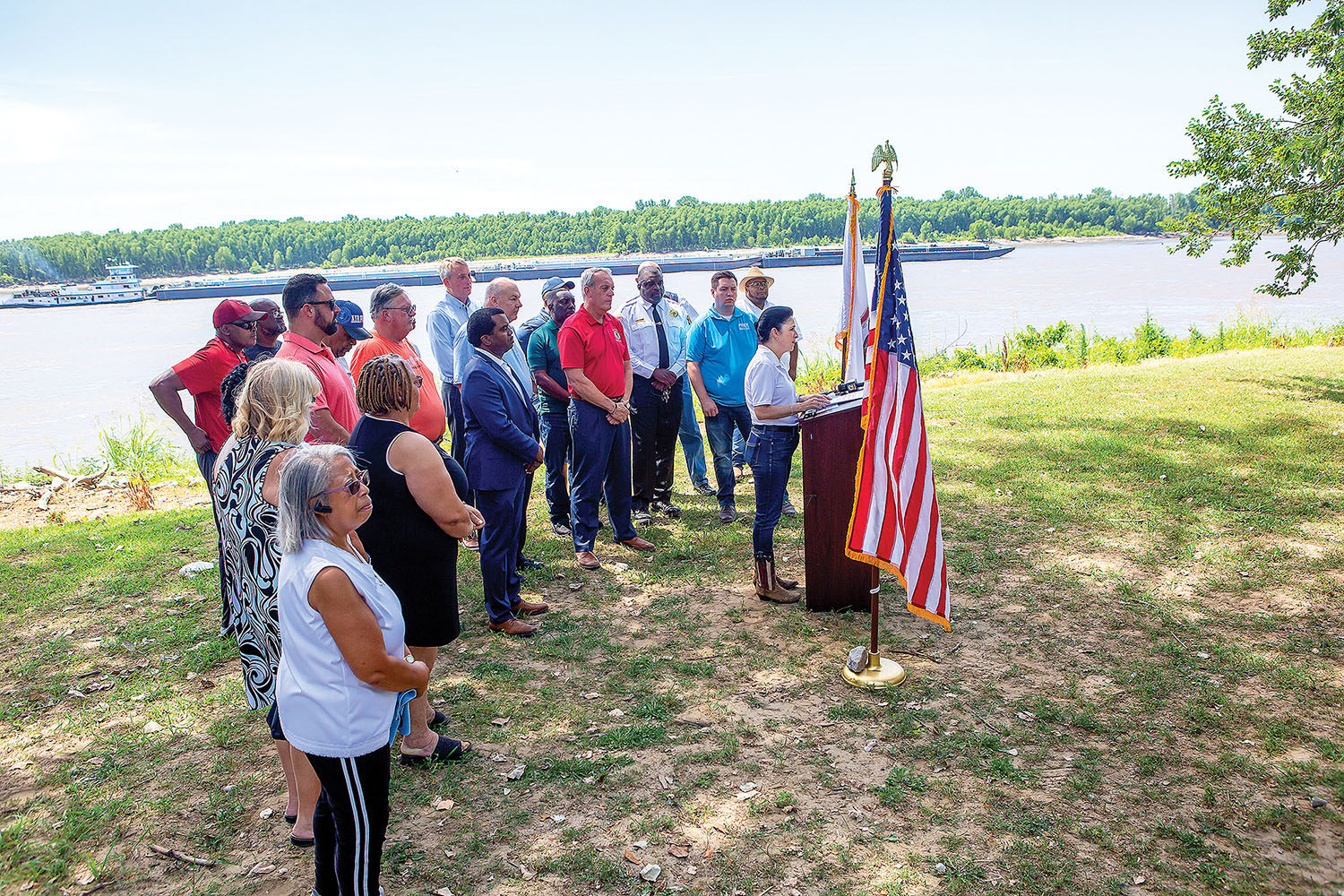 After Nearly Two Years, Cairo Port Work Is Still ‘Behind The  Scenes’

Nearly two years have passed without a ground-breaking since Illinois Gov. J.B. Pritzker announced the state was investing $40 million to build a port at Cairo, Ill., but state leaders say $2.7 million has been spent so far, and work toward construction remains moving forward.

When Pritzker announced the state’s investment on August 4, 2020, he said the first $4 million was being released immediately to fund “final engineering, permitting and site preparation.”

In a visit to Cairo on June 24, Illinois Comptroller Susana A. Mendoza, the state’s chief financial and accountability officer, met with Cairo residents and officials regarding progress on the Alexander-Cairo Port District.

She said that it is her understanding that the full $4 million won’t be needed because some of the work had come in under budget.

“You have my word, that as soon as vouchers land on my desk for capital funds to cover anything relating to the port district, that I will move heaven and Earth to get southern Illinois the resources it needs to get this port built to become the vital economic engine and supplier of jobs this region needs it to be,” Mendoza told Cairo residents at the city’s library. She repeated those sentiments later the same day in a news conference nearby at the confluence of the Mississippi and Ohio rivers.

Todd Ely of Ely Consulting Group, lead consultant on the port project for the past seven years, said at the news conference that a second phase of the project will begin “later this year.”

The new port design is for a port with a total investment of $250 million to $300 million, he said.

“We’ll do a new study once we begin phase 2 later this year,” Ely said. “Once the business plan and financial pro forma are done, we’ll be able to put that into the computer model, and I fully expect those numbers to rise significantly.”

Mendoza began her remarks by asking, “Is there such a thing as too much focus on making sure that the Alexander-Cairo Port District is progressing?”

In response, the crowd shouted, “No!”

Mendoza said she remains focused on the project.

“I’m going to keep coming until this port is opened and attracting local business and providing jobs and helping Cairo to thrive,” she said.

She promised continued support as well.

“You’ve all heard me say during my many frequent visits here how much I love Cairo and Alexander County and southern Illinois and how I’m prepared to use the full power of my office to put this port and economic development for southern Illinois at the front of the line for state resources. Illinois has a prime opportunity to become a leader in this space. We have a strong competitive advantage over competing states, and we need to keep that advantage. We can’t let it float on by.”

“There is plenty more work to do, and we must do everything to get this port moving along,” she said.

She added that a lot of the work that has been done so far and all of the payments that have gone out so far are for items the public does not see.

Remaining work to be done before a ground-breaking can take place includes consultant work and “engineering work critical to making sure the project runs smoothly,” Mendoza said.

“Every one of us up here, Democrat and Republican, southern and northern Illinois residents, are all 100 percent united on fighting for this port to become a reality,” Mendoza said.

Fowler said at the event that the port is one of his top priorities.

“This place has always been one of my top priorities because of the economic development and the opportunity and the hope and the vision that lies here amongst this confluence: these two mighty rivers, the Ohio and the Mississippi, that doesn’t exist anywhere else in the entire nation, and we want to take advantage of that,” he said.

He noted the opportunities that he believes would come along with having a public port in Cairo.

“This industry is growing each and every day, especially in container-transportation opportunities, and we’re taking advantage of that because it is the most economical form of transportation that there is,” Fowler said.

Work on making the port a reality is ongoing, he said.

“We have a lot of work to do,” he said, then addressed Cairo residents directly. “There has been a lot of work behind the scenes, and we’re just so thankful for the administration and the governor for making this a priority and everyone involved, especially you and your hope and vision. I’ve seen the difference, the influx in enthusiasm in this community with the creation of the Cairo Preservation Society that’s raising money now to enhance the library and the Magnolia Manor and the Carriage House. It’s so encouraging to see people coming back to this community that had left and gone to other areas. Some from out of the state have come back because they see the vision in this community and the vision in southern Illinois.”

When reached July 26, Fowler said he was unable to provide an update but added, “There’s a tremendous amount of work going on behind the scenes.”

Aileron Communications, a Chicago-based public relations firm that represents the port district to the media, said the same day that no additional updates on the port project were available.