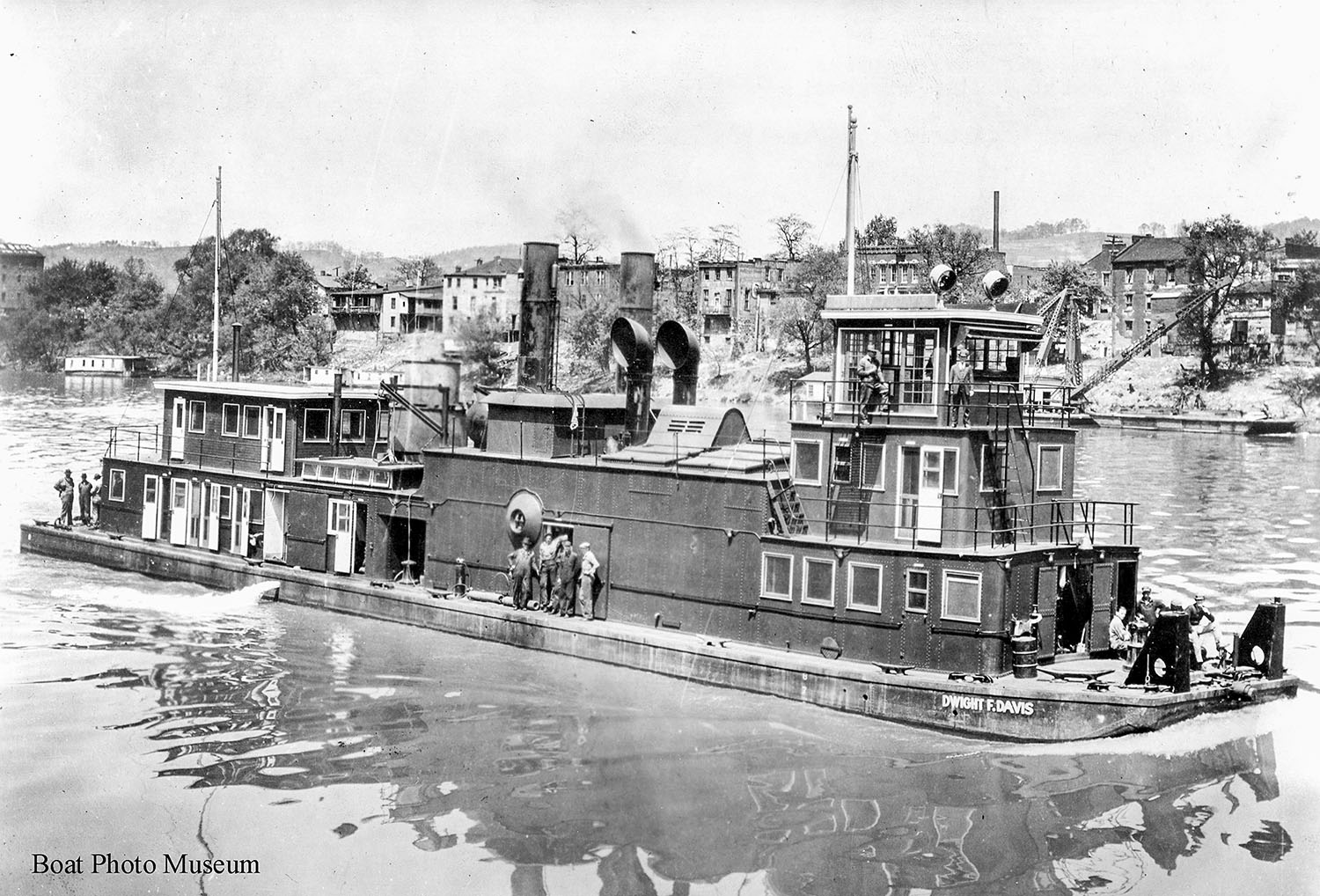 The Inland Waterways Corporation (IWC), the government-owned barge line, as mentioned last week, had built a fleet of vessels in 1920 intended for Warrior-Tombigbee River service. In 1929, they built yet another towboat for this area. The Charles Ward Engineering Works, Charleston, W.Va., secured the contract for what would turn out to be an unusual vessel. The IWC continued to move forward with experimentation in innovative technology, and this towboat would be no exception.

The new boat was named in honor of the U.S. secretary of war, Dwight F. Davis, who would soon go on to an appointment as governor-general of the Philippines. A St. Louis native, Davis had been a tennis star in his youth and was the founder of what is now known as the Davis Cup international tennis competition. The Dwight F. Davis was similar in size to the Howard-built Warrior-Tombigbee boats of 1920, with a steel hull of 140 by 25 by 8 feet. Like the earlier boats, it was also steam-powered with triple-expansion condensing engines 10-1/4’s, 16-1/2’s, 27’s with 18-inch stroke rated 1,000 hp. at 185 rpm. The twin propellers were 7 feet in diameter.

The innovation and experimentation with this boat involved what fueled the water tube boilers. Boats built for the IWC were usually oil burners, but the Davis was set up to burn pulverized coal. A large shed-like structure midway of the boat evidently housed the mechanisms for this pulverized or “powdered” coal system. Two large ventilator scoops were positioned on top of the shed just forward of the twin stacks. In other aspects the Davis resembled a “modern” river towboat of the time.

The Dwight F. Davis was delivered to the IWC on April 25, 1929, and departed for Mobile, Ala. The powdered coal system utilized on board was touted in the 1930 Annual Report of the Inland Waterways Corporation to the secretary of war as being “satisfactory.” In the 1932 Annual Report’s Warrior River Division section authored by Glenn E. Taylor, operating manager, it was noted that “several changes have been made to our steamer Dwight F. Davis which proved very beneficial in reducing her operation cost.” It is not specified that the fuel system is what was being referred to here, but the powdered coal was ultimately not a success, and the boat was converted to burn oil.

The IWC operated the Davis until 1947, when it was sold to Warrior & Gulf Navigation Company, Chickasaw, Ala. They extensively rebuilt the boat, converting it to diesel with a pair of EMD 12-567 engines of 1800 hp. and Falk 2.5:1 reduction gears. In 1949, it was renamed Chickasaw. In July 1971 the boat was sold to G&C Towing, Point Pleasant, W.Va., and renamed H.E. Bowles. This was the second boat to have been named in honor of Hansford E. “Gene” Bowles, who had been associated with Point Towing and G&C Towing with Capt. Robert H. Bosworth.

The H.E. Bowles, with the radio call letters WC 7624, became a familiar fixture on the Upper Ohio and Kanawha rivers. In the 1970s and early 1980s, it was often found towing for Union Carbide Corporation, turning other boats on the mid to lower Ohio River and delivering the chemical tows to Point Pleasant and then on into the Kanawha River to Carbide facilities at Charleston, W.Va. It had a reputation as being a strong shoving boat, once confirmed to me by the late Capt. M.G. “Tom” Herdman, who said while it shoved and steered great, “God help you when you back,” as it evidently didn’t handle its stern well.

According to the 1991 edition of the Inland River Record, the H.E. Bowles was sold in October 1985 to Finleyville Towing Company, Glenwillard, Pa., and again sold in 1989 to Robert Van Pelt, Oakmont, Pa. It was last shown in the Off The Record section of the 1992 edition of the Inland River Record as having been converted to a landing boat. This was on the Allegheny River above Pittsburgh, and later photos of it show the name Chickasaw painted on the stern. I don’t know if the boat is still in existence or not at this time.