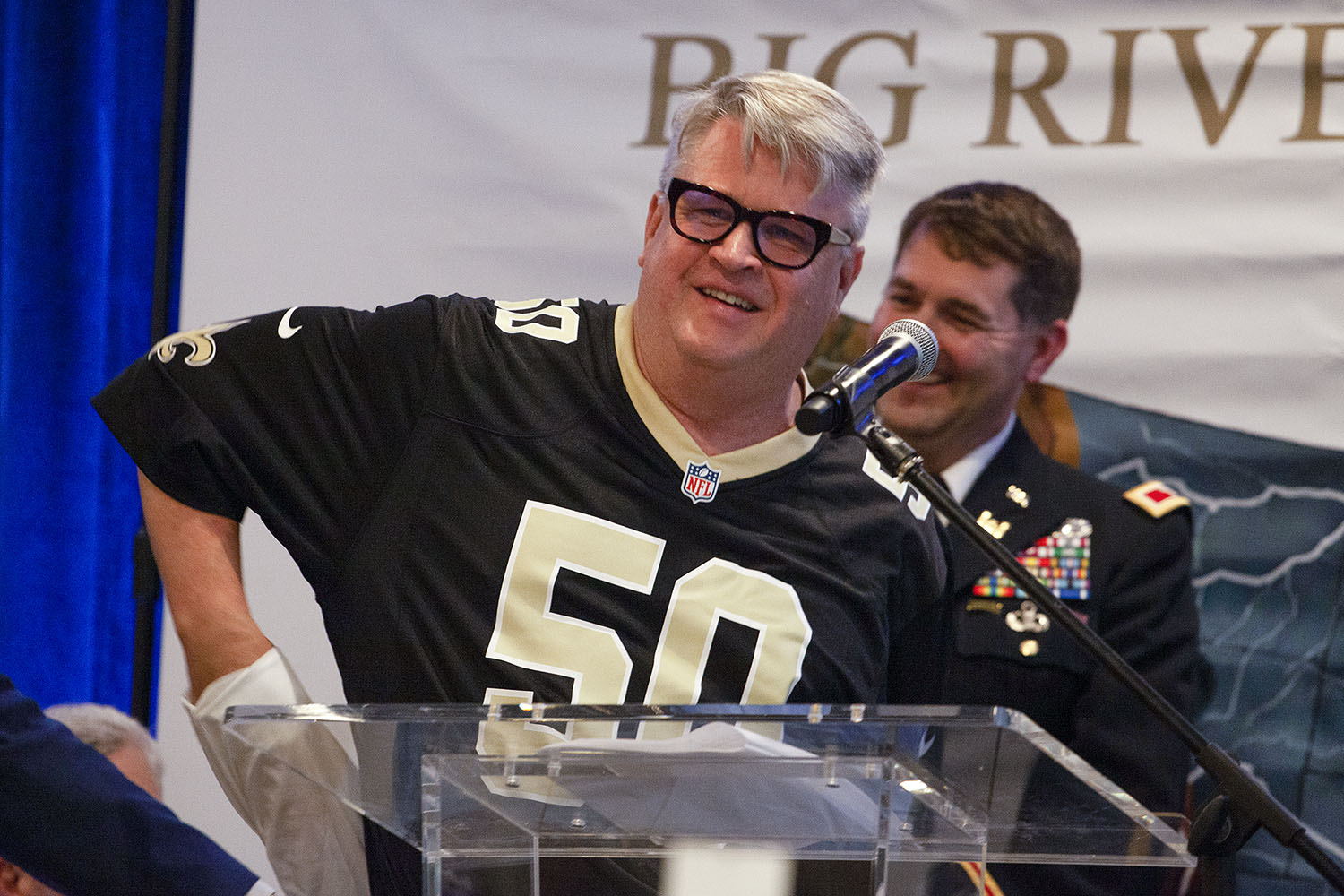 The Mississippi River, from its headwaters at Lake Itaska to where its passes stretch into the Gulf of Mexico like a taloned bird’s foot, has played a leading role in the culture, psyche, economy and growth of the United States throughout its history.

For that role, the river has garnered its fair share of nicknames over the years, including Old Man River, Big River, Father of Waters and the Mighty Mississippi, just to name a few.

But now that the controlling draft of the Mississippi River Ship Channel from the Gulf up to Mile 106 has been increased to 50 feet, with work continuing to deepen the river from 45 feet to 50 feet all the way through the Port of Greater Baton Rouge, stakeholders of the deeper channel have a new name for the river: The Mightier Mississippi.

It’s been 10 years since the Big River Coalition and other Mississippi River stakeholders launched the effort to deepen the river to 50 feet. Representatives from the U.S. Army Corps of Engineers and the Louisiana Department of Transportation and Development (DOTD), the non-federal sponsor for the project, signed the project partnership agreement two years ago, and the dredging effort at Southwest Pass started soon thereafter. This past spring, the river pilot associations responsible for directing ships up and down the river began increasing their draft recommendations foot by foot. Now, the Associated Branch Pilots (the Bar Pilots) and Crescent River Port Pilots Association (Crescent Pilots) both have 50 feet as the controlling draft for their entire area of responsibility, with the New Orleans-Baton Rouge Steamship Pilots Association (NOBRA) listing 50 feet up to the Huey P. Long Bridge at Mile 106.

It’s a mighty accomplishment for the nation and the world, and stakeholders met August 16 at Mardi Gras World in New Orleans to celebrate the milestone and reflect on the 10 years’ worth of efforts that led to the deepening of the ship channel.

“We had to clear three hurdles,” said Sean Duffy, executive director of the Big River Coalition. “First, the full channel maintenance from the Water Resources and Development Act of 1986 was 45 feet, so to go beyond that we had to change the threshold to 50 feet. That was done in WRDA 2014.”

Next, the Corps had to conduct a General Re-evaluation Report to prove the economic viability of the project. That record of decision was signed in August 2018. Finally, funding had to be allocated for the project.

Three points of “lagniappe” made the third task more attainable. First, WRDA 2016 changed the cost-share for the project from 50-50 to 75 percent from the federal government and 25 percent from Louisiana DOTD. In addition, the United Soybean Board, convinced that a deeper Mississippi River Ship Channel would make shipping its members’ soybeans overseas much more cost-competitive, stepped forward to contribute $2 million toward the state’s share of the project. Finally, federal funding for the project came from a regional dredging demonstration program tucked into WRDA 2020. The project even proved to have far-reaching environmental benefits, with material dredged near Southwest Pass used beneficially in the surrounding marsh.

Duffy said the entire effort, from start to its current status, has been successful thanks to the collaborative work of what he calls “Team Mississippi River.”

“We win and lose as a team, and tonight is about that very thing,” Duffy said. “This is a victory, and we’re here to celebrate.”

Joining Duffy was a whole host of leaders who played a role in the deepening effort. First to speak was Louisiana Gov. John Bel Edwards.

“This is a project, this is something we’re celebrating that really does turn on strong partnerships,” Edwards said. “Two years ago, the U.S. Army Corps of Engineers, DOTD and myself gathered together to authorize an agreement to move forward with deepening the Mississippi River from the Gulf of Mexico to Baton Rouge.”

Besides the environmental benefits, Edwards said, the project represents a critical step for ensuring the competitiveness of waterborne transport on the Mississippi River.

“Deep-draft access to the ports of Plaquemines, St. Bernard, New Orleans, the Port of South Louisiana and Baton Rouge port will provide immense economic benefits for the state of Louisiana,” Edwards said. “The economic growth from this project should create several thousand new jobs.

“The additional 5-foot depth,” he added, “will allow for larger cargo ships that transport goods both domestically and internationally to use the channel. And it will allow us to move forward and get a new container terminal somewhere south of the Crescent City Connection, because we have to. The largest vessels aren’t going to get on the other side of that bridge, so this dredging project is incredibly important to that. … As Sean said, we want to make it the Mightier Mississippi River.”

Edwards emphasized the economic impact of the Mississippi River and its tributaries, which account for roughly $750 billion of the nation’s economy and 2.4 million jobs. In Louisiana alone, one in every five jobs is connected to the river. With the increased capacity of the deeper channel, the Corps’ economic justification report for the project identified a benefit-cost ratio of 7.2 to 1.

“We export 60 percent of the nation’s grain, but soon it’s going to be 70 percent because of what we’re doing,” Edwards said.

The first vessel drafting 50 feet to transit the river was the mv. Capri, a bulk carrier outbound August 5 loaded with 134,706 metric tons of coal. A Crescent pilot guided the ship down to Pilottown, at which point a Bar pilot came aboard to direct the ship to the Gulf of Mexico.

“The Bar Pilots applaud the ongoing joint efforts of local, state and federal governmental agencies, our elected representatives and the maritime community to keep our ports competitive,” said Capt. Michael Miller, president of the Associated Branch Pilots and chairman of the Big River Coalition. “The completion of the 50-foot deepening project on the Mississippi River Ship Channel is proof positive that the Lower Mississippi River Valley is open for business on a new level.”

U.S. Rep. Troy Carter (D-New Orleans) emphasized the partnerships across the political spectrum that helped make the project a reality.

“Here in Louisiana, the Mississippi connects us all—economically, culturally and physically,” Carter said. “It’s important that we work together and speak with one voice as a region on behalf of our shared goals. That’s why this project to deepen the channel to increase shipping opportunities is so exciting. We are opening a new chapter to help energize our economy to new heights and continue to help lower costs for Americans.”

And the deepening project isn’t just a Louisiana priority. The effort found a strong supporter in U.S. Sen. Cindy Hyde-Smith (R-Miss.), who serves on the Senate Appropriations Committee and first announced her support for the project in 2019 when sediment loads that year lowered the available draft at Southwest Pass.

“The project to deepen the ship channel is important to the state of Mississippi and all states connected by the Mississippi River and Tributaries,” said Hyde-Smith, who mentioned the required emergency channel maintenance in 2019 and WRDA 2020’s regional dredge demonstration program that provided federal funding for the deepening project. “My office continues to work with the Big River Coalition to advance the multiple benefits provided by the regional approach that improves the ability of the Army Corps to maintain the fully-authorized 50-foot channel dimensions along the nation’s most prolific waterway. The increased draft of the ship channel will promote waterborne commerce and reduce transportation costs for Mississippi farmers and commerce on the river for decades.”

A high point of the event was Duffy casting off his jacket, tie and collared shirt to reveal a New Orleans Saints jersey with the number 50 in honor of the river’s depth. Duffy then presented Col. Stephen Murphy, the outgoing commander of the New Orleans Engineer District, with a number 50 jersey as well. Murphy has been the district commander for the entire deepening effort to this point.

“The Corps is so proud to be a part of this project,” Murphy said. “For those of you who don’t know, we don’t deepen the entire river from the Gulf to Baton Rouge. It’s actually about 75 noncontiguous miles of the 253. But it takes an incredible amount of work and teamwork.”

Murphy thanked members of DOTD, the river pilots and the dredging contractors who all were steadfast partners for the project. He also pointed out that the New Orleans District manages the largest dredge program in the Corps of Engineers and that the Lower Mississippi River stands as the most important waterway for the nation. Current events around the world only strengthen its standing, he said.

Work is ongoing to deepen the crossings from upriver of New Orleans to Baton Rouge. That effort, which will also require utility and pipeline relocations, could take two to three years to accomplish.

Caption for top photo: Sean Duffy, executive director of the Big River Coalition, takes off his shirt to reveal a New Orleans Saints’ jersey with the number 50, signifying the newly achieved 50-foot depth for the Mississippi River Ship Channel to New Orleans. (Photo by Frank McCormack)