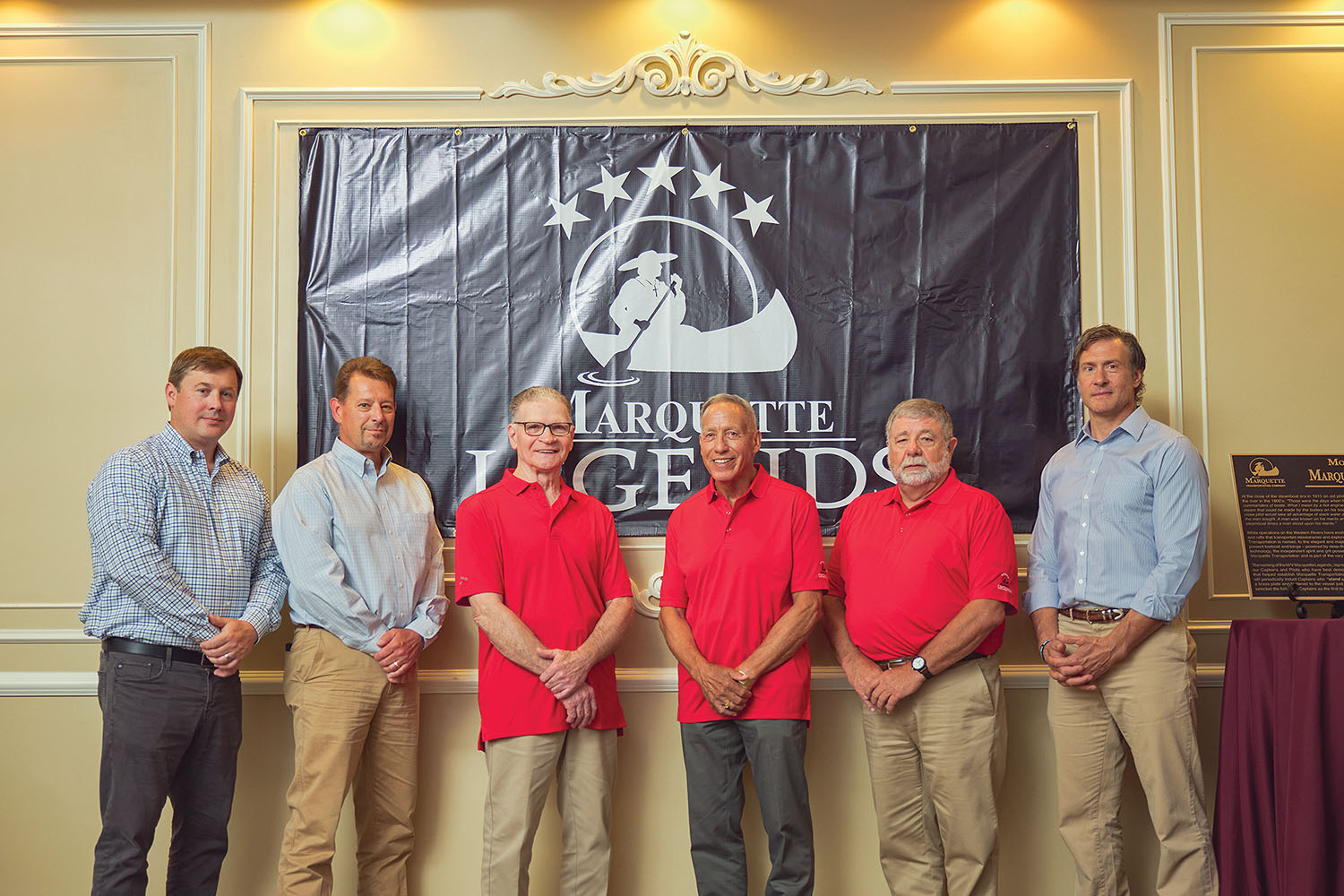 Three veteran towboat captains  became the newest class of Marquette Transportation “legends,” the Marquette River Division’s version of a hall of fame, at a banquet and awards ceremony August 10 in Paducah, Ky.

“These guys are exactly the reason we have the vessel the Marquette Legends and the idea behind that,” said Darin Adrian, executive vice president of Marquette’s river division.

The captains’ names will be engraved on a brass plaque and fastened to the mv. Marquette Legends’ hull, just beneath its bell.

Adrian said the men are all excellent boat operators and managers as well as family men who represent themselves and the company well in their time on and off the vessels.

In presenting the awards, Damon Judd, president and CEO of Marquette Transportation, noted, “We have talked a lot about how Marquette is powered by our people.”

He then said it was important to realize that being a mariner today is no small task, and that it takes passion, skill and sacrifice, with mariners who on average spend 240 days a year away from their families.

“It’s the sacrifices they make that keep us moving forward as a company,” he said.

Judd recently announced that another vessel in the Marquette River Division’s fleet has been renamed the mv. Marquette Mariner.

“We wanted to honor all of Marquette’s mariners with the renaming of one of the largest vessels in the fleet,” he said. “The dedication, hard work and sacrifices our mariners make are what drive our company forward.”

Judd said that together the eight men have more than 200 years of experience on Marquette vessels.

He also took time to thank all of their families.

“We know this doesn’t work unless the families are behind us,” he said.

Drury, 66, said the award was a great honor.

“To be included in a group of eight people who have this award is very special to me,” he said.

Drury said he has been working on boats since he was 20 years old. All three of his children and all seven of his grandchildren and their spouses, a total of 15 people, came to support him at the induction.

Zeringue, 77, said, “It feels wonderful.” He took after his father, another riverboat captain, in getting into the industry. His late brother was a captain as well.

He said he likes working for Marquette because of the “family atmosphere.”

“That makes all the difference,” he said. “We’ve all worked for different companies, but this is where I choose to stay.”

Zeringue overcame a complete corneal transplant in 2018 that left him unable to work for 16 months before picking up his job right where he left it.

“Marquette saved my job for me when I was able to come back,” he said.

Dufrene, 73, started out working on towboats in 1971. He said work as a riverboat captain has him playing lots of roles, including working with new deckhands and helping to instill a work ethic as well as being a counselor and an extended family member.

“It’s been a fantastic career,” he said.