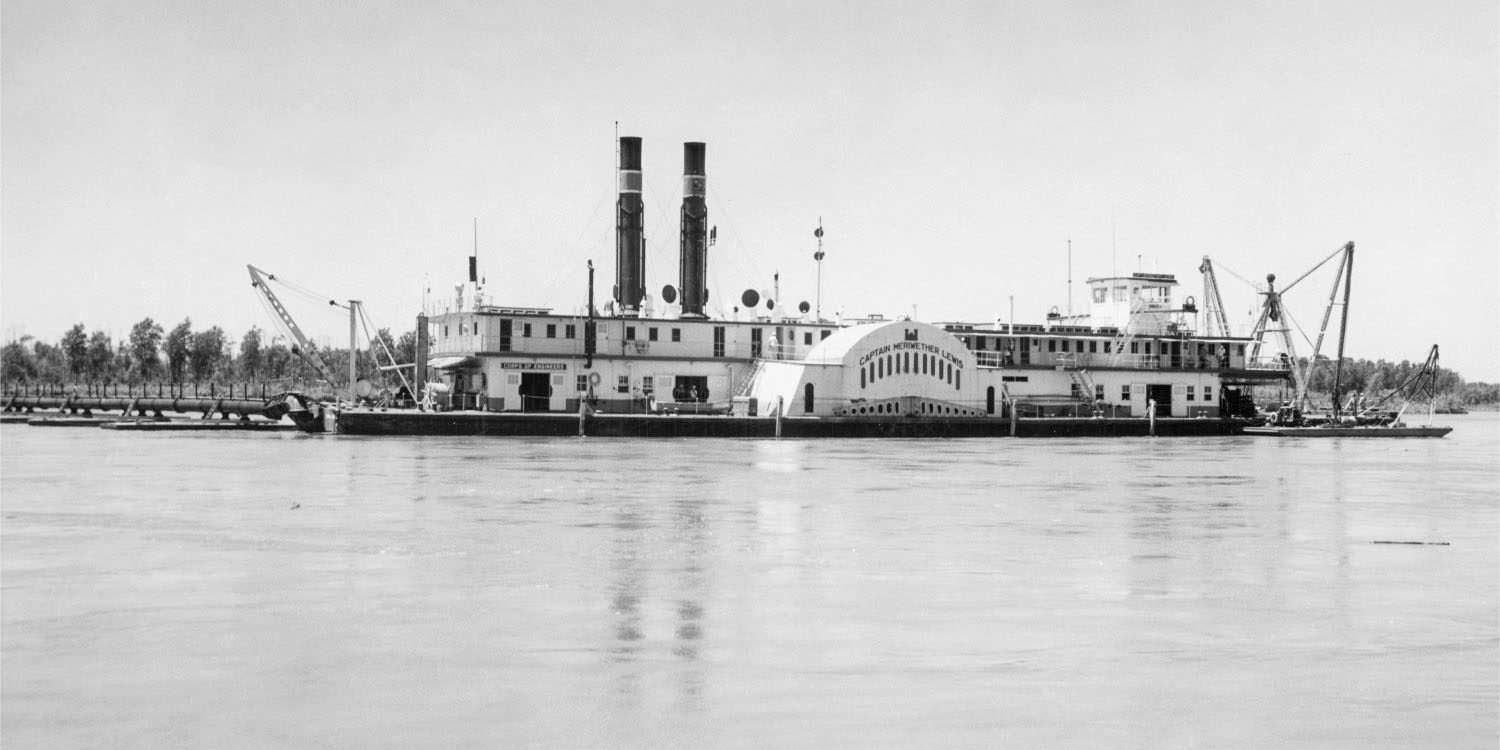 Fire-breathing behemoths once roamed the Missouri River. No, this isn’t in reference to prehistoric or mythical creatures, but rather the four large dredges built by the U.S. Engineer Department to initiate and then maintain navigation on the Missouri River. These dredges might not have seemed so large on a wider waterway, but on the narrow, winding courses of the Missouri, at nearly 270 by 85 feet (not counting attendant floats and pipelines) they appeared to be true leviathans.

The government had been focused on opening the Missouri to modern navigation since the formation of the Inland Waterways Corporation, the government-owned barge line designed to revitalize river transportation. This appeared to be coming to fruition in mid-1932 with Secretary of War Patrick J. Hurley announcing that an official navigation opening was expected to happen in June, highlighted with an inspection trip from St. Louis to Kansas City that he would attend himself.

The May 14, 1932, issue of The Waterways Journal featured a story on page three that was headlined “7,000 On The Missouri – Huge Army Preparing Channel for Start of Navigation June 21.” The piece indicated that 5.000 men were working under 34 contractors between Hermann and St. Joseph, Mo., building dikes and channel structures, with some 2,000 more working on War Department boats. “At dozens of places, piledrivers on boats pound away through the nights under the glare of electric lights. All day long men weave, weight and sink the mats that protect the basis of the driven piles and the newly shaped banks.” The article indicated that the work was scouring out the channel as the engineers had planned, and that “It is making a ‘new’ Missouri River.”

The last paragraph stated that “Due up the river soon is the great dredge Lewis, which will move objects the current has not been able to remove from the new channel.” This “great dredge” was the Captain Meriwether Lewis, just built by the Marietta Manufacturing Company at Point Pleasant, W.Va. This was the first of four virtually identical dustpan dredges to be built by the firm for the U.S. Engineers’ Kansas City District.

Powered by steam, the vessels were of sidewheel construction with steel hulls 269 feet in length and 50 feet wide with an overall width of 84 feet, 9 inches. The hull depth was 8.6 feet with an operating draft of 4 feet. The sidewheels were 25 feet in diameter with buckets 13.6 feet wide that were powered by a pair of Marietta Manufacturing tandem condensing engines, 20’s, 40’s – 7 foot stroke, rated 800 hp. The 34-inch Hardie-Tynes dredge pump was powered by an American Shipbuilding Company triple-expansion steam engine of 1,300 hp. The American company also supplied the steam capstans for the vessel. The steam itself was supplied by oil-fired Foster Wheeler steam generators. (Current information indicates it has Babcock & Wilcox boilers.)

The dredges could dig to a depth of 20 feet at an average speed of 150 to 200 feet per hour, discharging up to 3,000 cubic yards of material in that time. The St. Louis News column in the same issue of The Waterways Journal notes that the new dredge Captain Meriwether Lewis had arrived in that port the week prior and was “inspected at the U.S. Depot, foot of Arsenal street, by Major W.A. Snow, district engineer, Capt. L.S. Dillon, Capt. James F. Kennedy and C.E. Sanford.” The crew of the Lewis was listed as Capt. W.I. Maulding, master; Capt. Gerald H. Friemonth, pilot; Charles Black, chief engineer; A.M. Barbero and L.F. Hamberg, first assistant engineers; and A.P. Manning, clerk.

The Missouri River column of the May 28, 1932, issue of The Waterways Journal says that “the new side-wheel dredge Captain Meriwether Lewis began pumping about May 21 at or near Cambridge Bend, near Glasgow, Mo.” In the “Gallipolis Gossip” column of this same issue, it is stated that the second of the dredges, the Captain William Clark, was given its first trial trip by the Marietta Manufacturing Company. These would be followed in 1934 by the William M. Black and William S. Mitchell.

The four large dredges, each with a crew complement of some 50 people, served to open the Missouri to regular navigation, and then to maintain that navigation until the dike and training structure system began to perform as designed and self-scour the river.

As time went on, the dredges were used less and less, with the Lewis performing its last work in April and May of 1969. The final regular Corps dredging was done by the William S. Mitchell in 1979.

The Lewis was given to the Nebraska State Historical Society in 1976, and it is now on display at Brownville, Neb., where it was placed in a dry berth alongside the Missouri River. The William M. Black is now located within the Ice Harbor at Dubuque, Iowa, where it is part of the National Mississippi River Museum & Aquarium. After retirement, the William S. Mitchell was at first located at Kansas City, where an attempt was made to preserve it, but it is now in the Cincinnati area and owned by BB Riverboats, which utilizes it at Halloween as a popular haunted boat venue known as the USS Nightmare.

With the assistance of research done some years ago by retired Omaha District employee John LaRandeau, it seems the Captain William Clark at some point was partially dismantled, with the upper cabin, pilothouse and sidewheels removed. It was also converted to diesel power and went to the Gulf/Gulf Intracoastal area. From there it has dropped out of sight, and if anyone knows the final disposition, please let us know.

The Missouri “River Rats” Association meets aboard the Captain Meriwether Lewis each August, and this year it had more than 40 in attendance. For more information, or to donate to the preservation of the Lewis, contact Capt. William H. “Bud” Kieler, treasurer, at: 64426-735 Road, Peru, Neb. 68421. The group is currently seeking funds for major wood restoration on the Lewis.