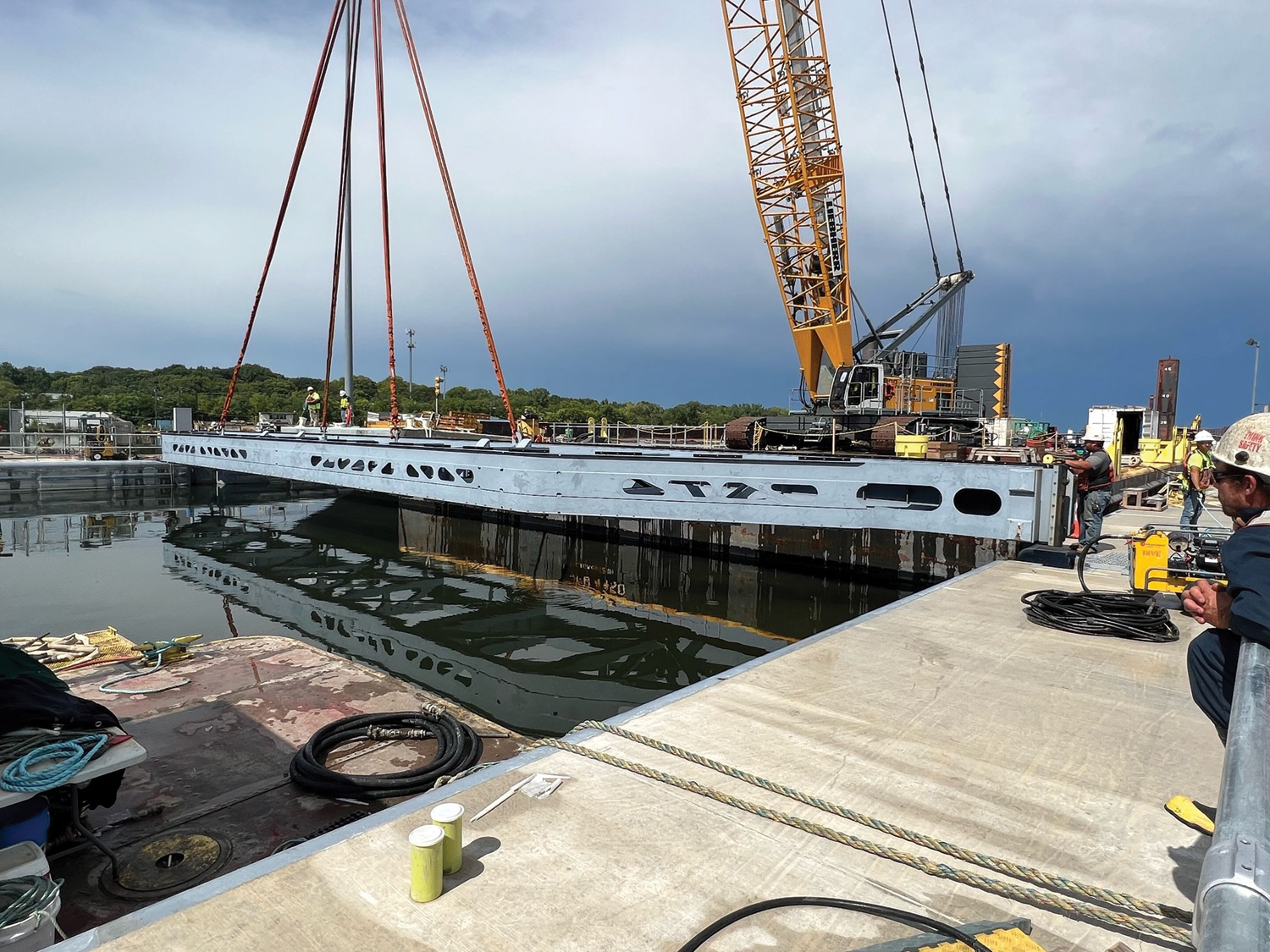 One lock closure on the Illinois Waterway is complete with another just starting during daylight hours certain days, causing impacts to navigation within the region.

Both the work completed the first week of September to install bulkhead slots at Brandon Road Lock and Dam and a research project taking place at Peoria Lock and Dam from late August through October 7 to try to prevent the spread of invasive carp are steps to prepare for more major work along the waterway in future years.

Work at multiple locks along the waterway was completed between July 1 and October 29, 2020. The next series of consolidated closures is scheduled between June 1 and September 30, 2023.

Additionally, a short closure will be necessary at Lockport in 2024 as although new lift gates are being fabricated, they will not be ready until that time, said Tom Heinold, chief of operations for the Rock Island Engineer District.

Unlike the Upper Mississippi, the Illinois Waterway operates year-round, so there is no seasonal closure to complete maintenance work.

The work at Brandon Road Lock and Dam on the Des Plaines River section of the waterway at Mile 285.9 was originally scheduled for the 2020 closure, but it was delayed because the Corps didn’t receive bids to complete the work at the same time as other repairs, Heinold said. There were a limited number of contractors available to do work in the region, and their assets were already at use at the other job sites along the waterway, he said.

In order to maintain plans for 2023 to complete installation of new miter gates at Brandon Road, it was necessary to close the lock for a few weeks, Heinold said. Each of the locks on the waterway is a single lock with no auxiliary chamber, so that halted navigation.

With the poiree dam system once used to dewater locks along the waterway condemned in the 1990s, there has not been an accepted way to dewater the locks for necessary inspections and repairs for years, Heinold said. Installation of bulkhead slots will allow the placement of steel stoplogs, which are stacked with seals between them, allowing dewatering.

“Brandon Road is the very last one in that systematic installation of bulkhead slots throughout the entire Rock Island District,” Heinold said.

The contractor for the bulkhead slots project was J.F. Brennan Company.

Heinold noted that this year’s work at Brandon Road was completed slightly ahead of schedule and within budget.

The Corps of Engineers has worked closely with the navigation industry to plan closures at multiple locks within narrow windows of time to decrease impacts to the industry and get the work completed during a time of lesser flows while avoiding closures during the bulk of the busy harvest season.

The closure at Peoria Lock and Dam, Mile 157.7, is to test an invasive carp deterrent planned for installation at Brandon Road Lock and Dam as part of the Brandon Road Interbasin Project. The $858 million project will involve creation of a flushing lock, engineered channel with electric barrier, a bubble curtain and an acoustic barrier, all aimed to prevent the spread of invasive carp into Lake Michigan.

“The work at Peoria is in support of this research,” Heinold said.

The bulkhead slot installation taking place at Brandon Road this summer would have made it difficult to get the fish deterrent tested there, so Peoria was chosen as an applicable alternative for testing, he said.

The deterrent temporarily installed at Peoria is an Automated Barge Clearing Deterrent (commonly called an ABCD).

“We’re trying to test if we can dislodge fish from the space between barges,” Heinold said.

The ABCD involves an anchored hose attached to an anchored bubbler array that blows bubbles by use of a diesel-powered air compressor. The hose/bubbler array framework is tied to a Jersey barrier, the same type of modular concrete barrier one might see placed between lanes on an interstate during a construction project.

When a box style barge is placed in a tow adjacent to a barge with a sloped rake end, it creates a roughly triangle-shaped space in which invasive carp could potentially “hitchhike,” Heinold said.

The test involves driving a loaded six-barge tow with juvenile invasive carp placed for entrainment in the box-rake junction over the bubbler array, according to the navigation notice signed by Jon A. Klingman, chief of Rock Island’s channel maintenance section.

Work is planned to continue Mondays, Tuesdays, Thursdays and Fridays from 7 a.m. to 3 p.m. daily with navigation closed during testing. Timeframes are subject to change while testing is conducted. The district requested that towboat operators not tie up on the guidewalls during testing periods.

Over the 40 days of the test, through October 7, researchers plan on conducting 70 test runs, including some without the bubbler running to provide a control to measure the bubbler effect.

“Quantitative safety variables of interest include speed, yaw and lateral movement of the barge resulting from the continuous release of air from the air line,” according to the navigation notice. “Carp removal testing includes counting remaining fish entrained in the box-rake junction and measuring flow velocities in the junction gap.”

The ABCD is approximately 210 feet long with a series of nozzles spaced 8 feet apart. The nozzles release air to create a column of bubbles along the length of the array. The temporarily installed hose for the deterrent is routed from the surface around the end of the lower guidewall to avoid interference with navigation. The air hose and metal frames will be removed following completion of the study.

“If this test is successful, then similar technology will be applied in the design at Brandon Road,” Heinold said.