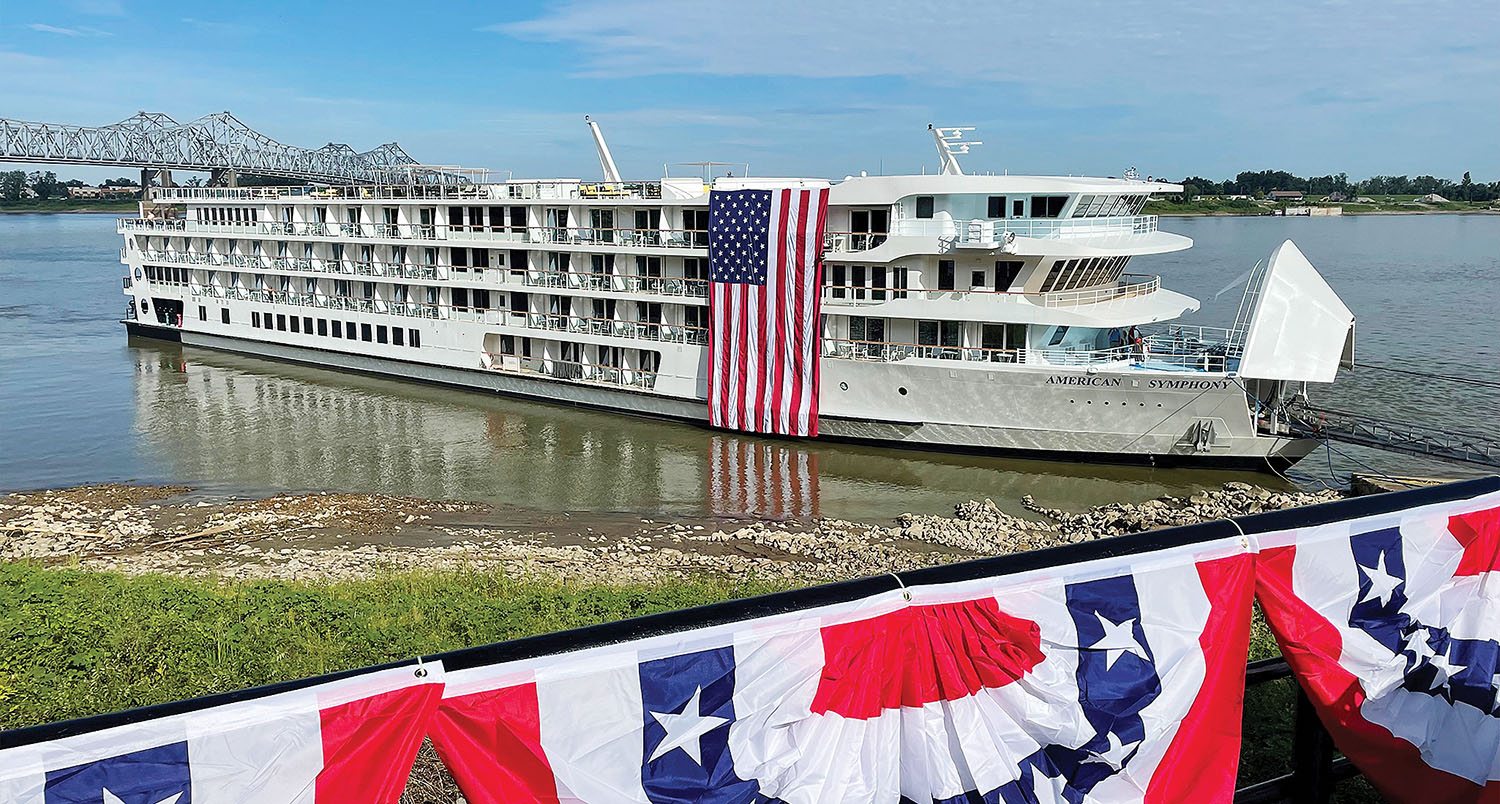 Cruise passengers, along with members of the communities of Natchez and Vidalia, La., gathered at the Natchez Convention Center for a performance by the Victory Belles, a National WWII Museum-based vocal group that performs music from the 1940s era, and speeches by special guests, including Asya Branch, 2018 Miss Mississippi and 2020 Miss USA; Mississippi Gov. Tate Reeves; Delbert Hosemann, lieutenant governor of Mississippi; Natchez Mayor Dan Gibson; Vidalia Mayor Buz Craft; and Charles Robertson, president and CEO of American Cruise Lines.

“American Cruise Lines led the last decade of river cruising on the Mississippi and, with new boats like American Symphony, will lead the next one,” Robertson said. “Natchez, Vidalia and all the towns along the way make the Mississippi the best cruising river in the world. We are so grateful for all the community involvement in tourism on the river, and we are honored to make Natchez the Godmother City of American Symphony.”

American Symphony has accommodations for 175 guests, and all the staterooms aboard the vessel—suites and single staterooms alike—offer private balconies. The vessel employs ample glass for enhanced views throughout. The Symphony features five decks, with a fifth deck skywalk that includes an ellipse skylight visible from the fourth deck café directly below. Other amenities include indoor and outdoor lounges, a grand dining room, fitness area and a yoga studio. As with other vessels in American Cruise Lines’ modern series, the American Symphony has a bow that opens and has a retractable gangway. The American Symphony measures 328 feet long by 59 feet wide.

American Cruise Lines will welcome the American Serenade, a sister ship to the American Symphony, early next year, along with two new coastal catamaran ships, designed to explore the East Coast. Those vessels will each have accommodations for 109 passengers.

All of American Cruise Lines’ vessels are built at the company’s associated shipyard, Chesapeake Shipbuilding, in Salisbury, Md. Robertson said the company’s rapid buildout of new vessels and their design reflect the strength of the inland and coastal cruise market in the United States.

“American Symphony is part of our ongoing commitment to leading the U.S. river cruise market by introducing innovative small ships every year,” Robertson said. “Smaller is better on the rivers. We look forward to American Symphony’s first season on the Mississippi, as well as the introduction of sister ship American Serenade early next year.”

“Inland river cruising continues to show tremendous growth in Port NOLA’s cruise portfolio, and this vessel is the latest crown jewel in American Cruise Lines’ fleet of modern riverine vessels sailing the Mississippi River from the city of New Orleans,” Christian said. “The history and charm of our vibrant city, combined with the unique offerings of sailing the Mississippi River, makes cruising from New Orleans an ideal experience for increasing numbers of riverboat passengers.”