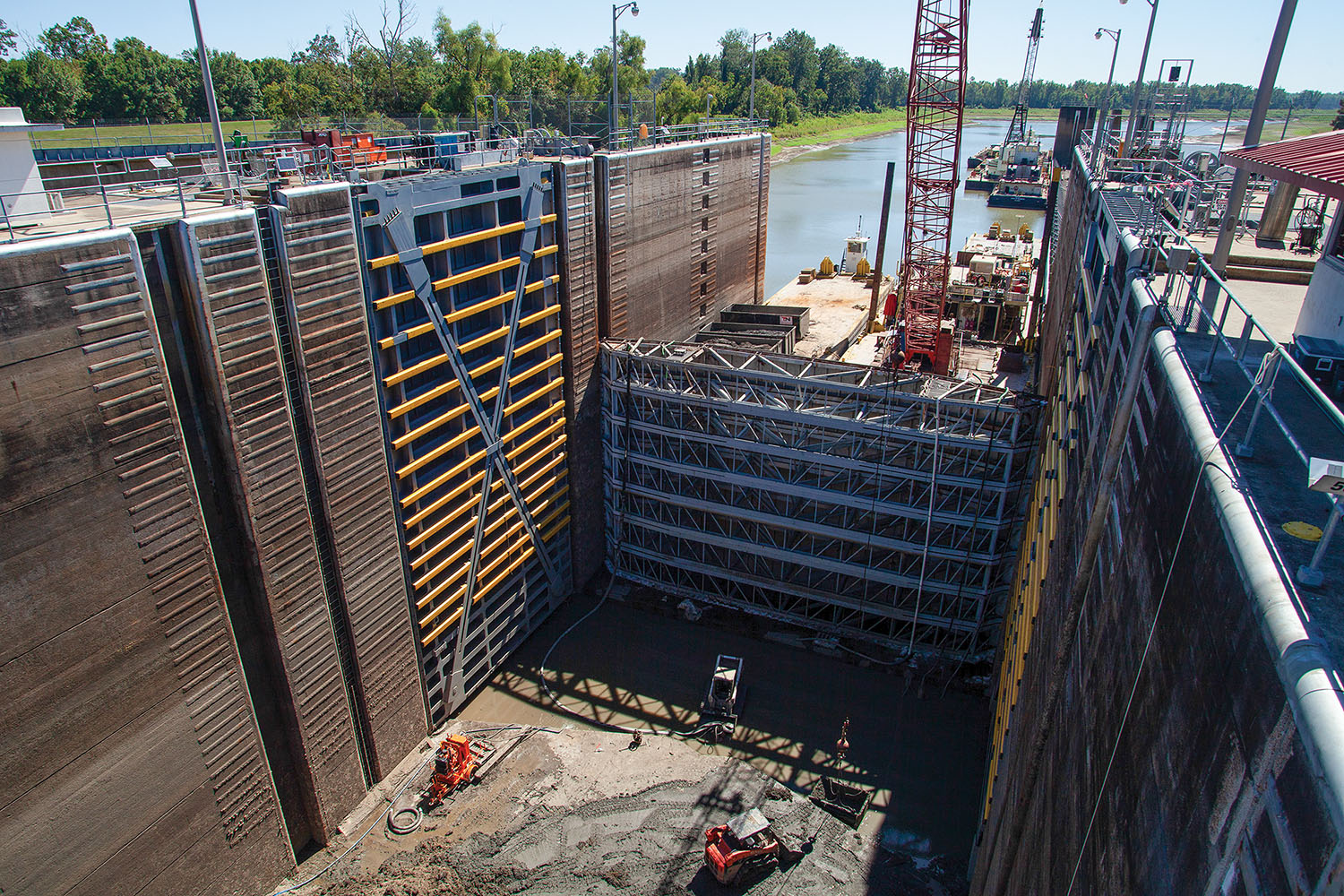 For the first time in 44 years, and only the second time since it first opened in 1963, the entire chamber at Old River Lock is dry, with a low Mississippi River and J. Bennett Johnston Waterway lapping at stoplogs at either end. The New Orleans Engineer District initiated the 75-day closure at Old River on August 30, and the lock is scheduled to reopen to navigation on November 12.

With the new miter gate in place and the lock dewatered, work in the chamber is now centered on cleaning out and refilling expansion joints throughout the lock, which measures 75 feet wide by 1,200 feet long.

“We’ve got almost 3 miles of expansion joints in this lock chamber,” said Russell Beauvais, Old River operations manager for the New Orleans District. “The filling material that keeps debris from getting in the joints had eroded. If dirt, rocks or anything were to get in there, that gives a hard place where, when the concrete would expand, it could bust the concrete, and you could have leakage. If you had water flowing through those expansion joints, then it could undermine your lock chamber.”

Beauvais said, although it’s been more than four decades since the chamber was fully dewatered, the Corps caught the degraded expansion joint material in plenty of time.

Overall, the lock is in good condition, Beauvais said. Drain and fill culverts are in good shape and show no signs of scouring or erosion.

Another interesting feature at Old River is how lock personnel keep track of groundwater levels and monitor the lock for lateral and vertical movement. A series of piezometers, which function somewhat like an engine’s dipstick, detect groundwater levels around the lock and are checked daily. “Total stations” around the chamber use survey prisms to detect any chamber movement, which might be caused by uplift from groundwater, for instance.

Simultaneous to the work inside the lock chamber, Old River Lock is getting a new rail-mounted gantry crane, which will replace the current crane that’s original to the lock. Konecranes in Kentucky fabricated the new crane. Ironically, it took a 500-ton crane to erect a 1,000-ton crane on site, which was then used to erect the lock’s new gantry crane, Beauvais said. In addition, Konecrane commissioned a small-batch beer to celebrate completion of the Old River crane project. Beauvais said, with the small batch of “Old River Lager,” he guesses that Old River Lock may be the only lock in the country with a beer named after it.

Beauvais said the closure has been routine so far, without even any surprises found when the chamber was dewatered. Besides mud, crews found a couple turnbuckles and a radio.

“It was a radio one of the guys lost off his hip,” Beauvais said of one of his employees. “That was government property, so we’re going to give it back to property. I hope the guy will get his money back.”

Concurrent with the closure at Old River Lock is a closure and dewatering at Lindy C. Boggs Lock and Dam, the southernmost lock on the Red River, which is part of the J. Bennett Johnston Waterway. That closure commenced August 30 and will extend to November 12. The Corps had planned a temporary opening at Boggs Lock to begin on September 29 and extend to October 14. However, due to issues “found during inspections adding to the original scope of work,” the Vicksburg Engineer District, which manages that waterway, has delayed the temporary opening until 12:01 a.m. on October 5. The lock will still close again at 6 a.m. on October 14.