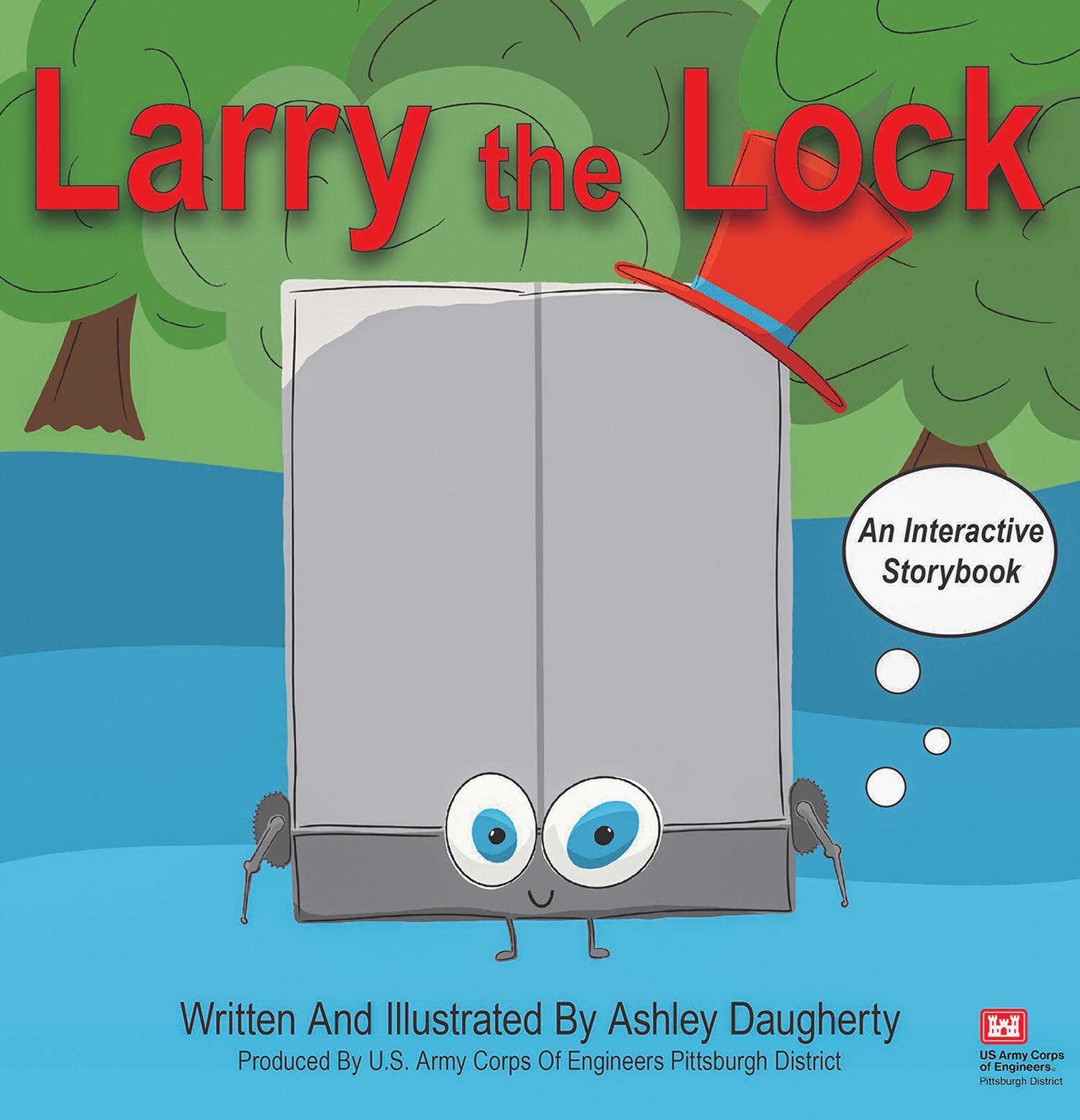 Thanks to the work of a Pittsburgh Engineer District intern, children are being introduced to an old lock by a new name: Larry the Lock.

The lock, known to adults as Allegheny River Lock and Dam 2, was personified as a cartoon with big googly eyes, shoulders made out of round gears and a red top hat with a blue hat band for a story book Ashley Daugherty wrote and illustrated to teach children how the lock works.

“I just wrote it from Larry the Lock’s perspective,” she said of the story. “I gave the lock a personality that I thought people would relate to more.”

Daugherty, 22, of Clarion, Pa., is pursuing her Bachelor of Fine Arts degree in graphic design from Point Park University in Pittsburgh. She came to the district in June for an internship and now plans to remain until her graduation next spring.

Daugherty sometimes reads to her young cousins and a nephew when she gets together with her family, so it was easy to think about how to tell children about the important jobs locks and dams do every day, she said.

“I just wanted to come up with a different way to educate and talk about how important river navigation is and how this type of facility works,” she said.

While Daugherty had originally envisioned a news article written at an elementary school child’s reading level, she said coworkers encouraged her to take the idea and turn it into a storybook.

She visited the lock, which opened for river navigation in 1934, receiving a tour from operators and a pamphlet they provide to boaters.

For the book, she named the lock Larry because she wanted the alliterative “L” sound in both “Larry” and “lock” to be catchy.

The book is available as a free downloadable .pdf on the Pittsburgh district site. Adults are encouraged to print out and staple the storybook, which includes some coloring pages.

Additionally, the district is exploring an opportunity to print hard copies of the book and make them available for sale.

In the book, Larry tells children about where he “lives” and describes himself as a “giant water elevator.”

He also tells children that one barge can move as much cargo as 58 big trucks and that one towboat can push as many as 15 barges.

“I don’t do all this work by myself, though,” Larry the Lock says on one page. “Thankfully, the U.S. Army Corps of Engineers Pittsburgh District manages me and has many great people working at my facility. I have a lock master who is in charge of all the critical decisions. I have lock operators who help me when I have to raise or lower the water in my chamber. They are the ones who open my gates and make sure everyone stays safe on their boats. Sometimes when I need repairs, civil engineers from downtown and other parts of the country will come and fix me.”

And Larry the Lock says, “Being a lock is fun.”

“I help people safely navigate the river every day, so they can get from one place to another in a more eco- and cost-friendly way than driving,” he tells readers. “I hope everyone remembers to be safe on the water, so make sure you always stay out of my restricted zones and wear a life jacket near the water!”

Daugherty said the book is geared toward children from kindergarten to fourth grade.

“But I think anybody can get something out of it,” she said. “It really teaches about locks and the role they play.”

She said she wrote the entire book in one afternoon in July, but it took until sometime in August to illustrate it using a program on her iPad called ProCreate.

The book was an immediate hit, Daugherty said, so much so that she is already considering stories for other locks within the district, whom she imagines as Larry’s friends.

“I’ve never written or illustrated a book before, but I’m really grateful to be given the opportunity to do this, and I’m excited to see where Larry and his friends will go from here,” she said.

Pittsburgh Engineer District employees have become some of Larry the Lock’s biggest fans.

“This is adorable,” said Andrew Byrne, a public affairs specialist with the Pittsburgh district. “We all universally loved it as soon as we saw it. We were really excited to see this book. I think Ashley did a great job with it.”

Caption for photo: Larry the Lock is a children’s book written and illustrated by Ashley Daugherty to illustrate the work locks perform on the river within the district. Daugherty has always had a love for art and reading. While pursuing a Bachelor of Fine Arts degree in graphic design, she had the chance to work as an intern at the Pittsburgh Engineer District. Daugherty wanted to make the mission of a lock more understandable, especially to children. (Illustration by Ashley Daugherty)