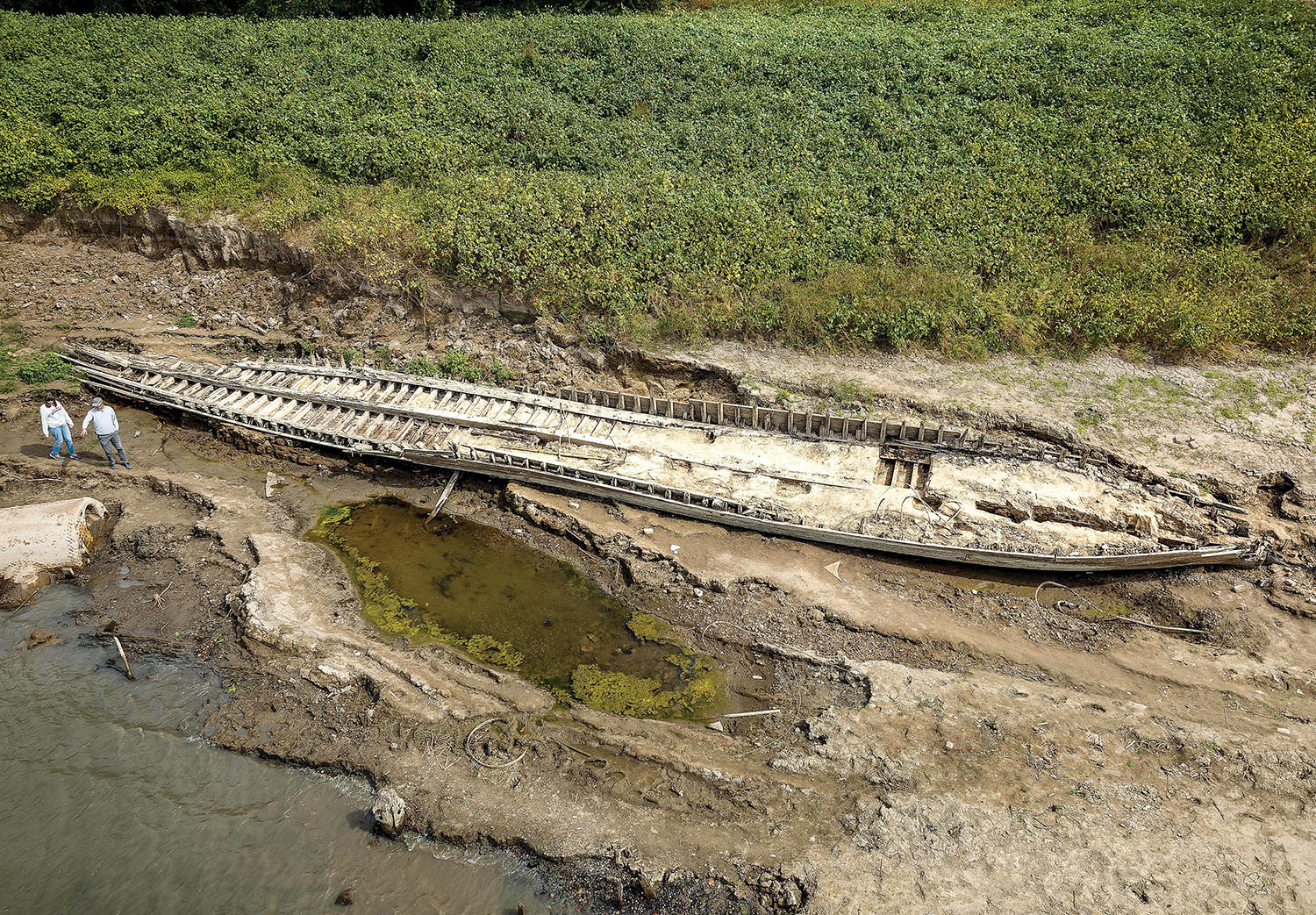 With the Mississippi River dipping below low water marks not seen in decades, many people who live beside it are seizing the opportunity to venture along the river’s ever-growing batture to see what they can see.

On the Upper Mississippi, the social media star of this low water season is, undeniably, Tower Rock, an island near the town of Wittenberg, Mo. For weeks, people have been braving the bumper-to-bumper gravel roads to experience walking out to Tower Rock on dry ground and climbing to the top. It’s been so crowded at Tower Rock that one intrepid graphic designer photoshopped a Dollar General atop it.

On the lower river, few places have been more traversed and photographed than the batture in Baton Rouge, La., in particular the area surrounding the wreck of what’s likely to be the steamer Brookhill, a wooden-hulled ferry dating to the late 1800s that sank at its mooring on September 29, 1915. What remains of the Brookhill, a “bootjack” ferry, is one of its two pontoons, which together would have supported a cargo and passenger deck, steam engine and paddlewheel. The ferry moved people, goods and livestock between Baton Rouge and Port Allen, La., on the west bank.

A Baton Rouge resident came upon the wreck in September, and it wasn’t long before Louisiana State Archaeologist Chip McGimsey was called on to help identify the old ferry and place it within its historical context. McGimsey said he’s received close to two dozen interview requests in the weeks since.

“From my view as an archaeologist, she’s a historic wreck,” McGimsey said of the Brookhill. “She’s not the most important in the world. The Brookhill was your basic workboat on the Mississippi River. There were dozens, if not hundreds, of boats like her operating on the Mississippi throughout its life.

“The Mississippi River in the 1800s was just like the Mississippi of today,” he added. “It was how most commerce got up and down before there were roads.”

Just like today, ships would deliver goods to Baton Rouge, with ferries like the Brookhill supplying smaller communities along the river.

“That’s her historical significance, her contribution to the commerce and life of the people who lived here,” McGimsey said.

McGimsey said to date no one is completely sure of the design of the Brookhill. The surviving pontoon likely measured 95 feet by 12 feet, which would put it in line with another ferry that served the Baton Rouge area at the time: the Istrouma. The Istrouma, which McGimsey said likely measured 120 feet by 25 feet, with a 5-foot draft, was built at Howard Shipyard in Jeffersonville, Ind., in 1896 for Baton Rouge Ferry Company. The Istrouma sank in the same storm that downed the Brookhill, only the Istrouma broke free from its mooring and was never seen again.

McGimsey said he’s been amazed at how much attention nationally and internationally the remains of the Brookhill has received. So far, there have been around 1,300 stories done on the Brookhill—and counting.

“What boggles my mind is, the potential audience for those stories is 4.7 billion people,” he said. “That’s almost 60 percent of the world’s population that might have seen a story about this little boat here on the river.”

Locally, the wreck has also received immense attention. McGimsey said likely thousands of people have come out to see what remains of the Brookhill, from people on lunch break to weekend explorers to homeschool groups during the week. The draw, he said, is that it’s a piece of history that can be touched.

“For most people, history is something you read in a book, see in a movie on TV, see in a painting, or you go to a museum and see things in a display case,” he said. “But you don’t ever get to see and touch it. Here, you can walk right up to it. Here’s a piece of history you can walk up to, you can touch it, climb into it, you can take your picture with it. And I think that’s what’s grabbing the public’s attention.”

There are other discoveries like the Brookhill just waiting to be made, McGimsey said, like another wreck—as yet unidentified—that a sixth grader found recently about five miles downriver from the Brookhill.

All it will take to discover them is a low river and curious people combing the riverbank.

Caption for photo: This wreck, exposed by the low water, is probably the remains of the ferry Brookhill, which sank at Baton Rouge in 1915. (Photo courtesy of P.J. Hahn)