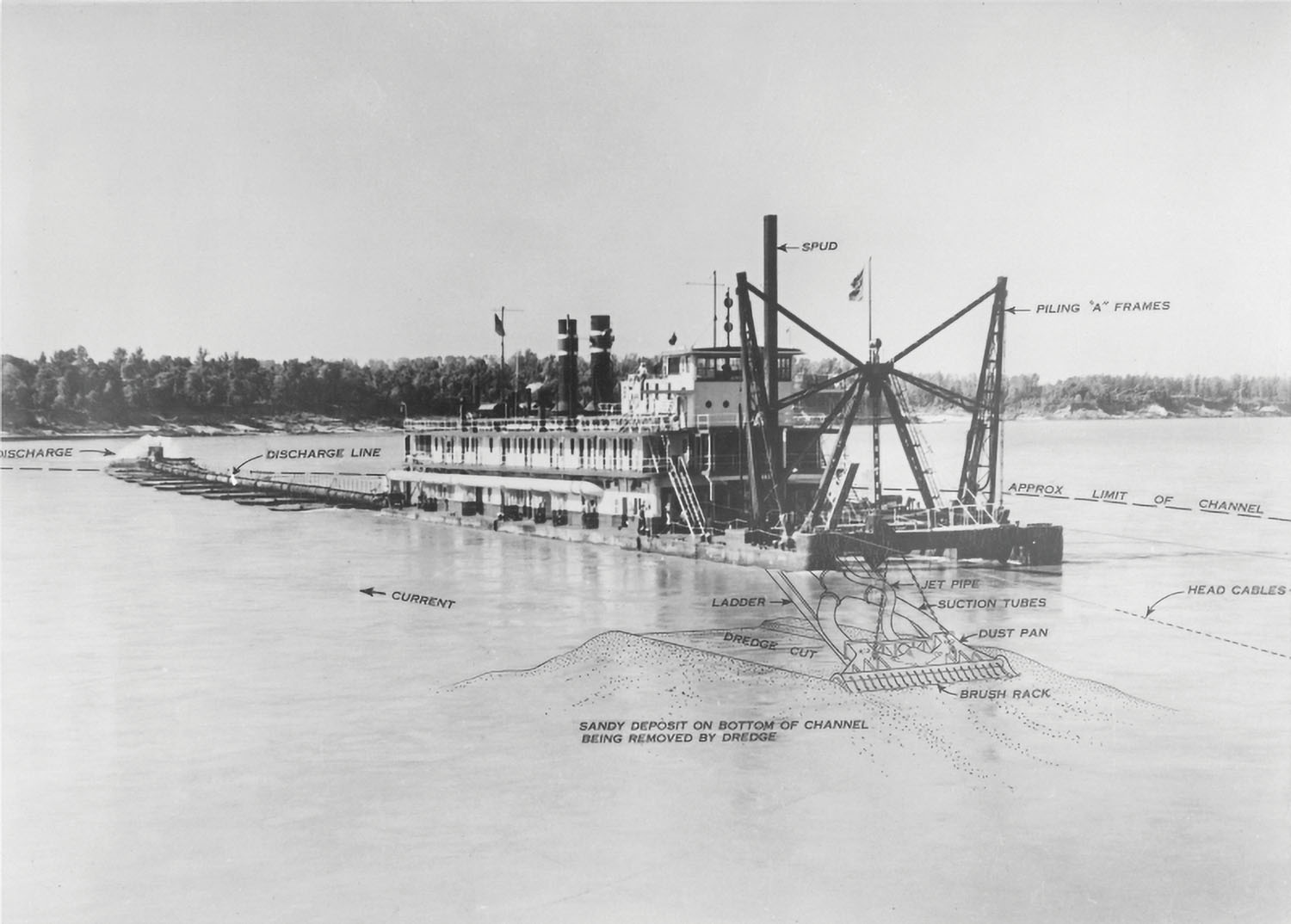 The present low-water situation on the Upper and Lower Mississippi brings the importance of the large Corps of Engineers dredges to prominence.

Those working the rivers and depending on the dredges may be surprised that two of these vessels have been engaged in such work for the better part of a century. The St. Louis District dredge Potter is some 90 years old, while the Vicksburg District dredge Jadwin is right behind at 88 years old.

The Potter was built by the Dravo Contracting Company at Neville Island, Pa., and launched on February 26, 1932. The steel hull of the dustpan dredge is 240 by 46 feet, and the original machinery was steam. Reciprocating engines powered the twin props, and the boilers were fired by oil.

The Potter was one of five dredges built for the U.S. Engineers by Dravo in 1932, and the first to be launched. The back cover ads for Dravo in The Waterways Journal at the time described these as “Super Dredges.” A twin to the Potter was the Ockerson, launched in March, and the other three were sternwheel vessels, the Dundee, launched in May, the Grafton, launched on October 1 and the Sainte Genevieve, launched on October 22. All were steam-powered.

The Potter served faithfully as originally built until 2001, when it was extensively rebuilt at Halter Marine, Gulfport, Miss. The design of the rebuild was by the Corps Marine Design Center and the St. Louis District. The stern of the dredge was replaced with a “towboat style” stern with kort nozzles, and the steam power plant was replaced with three Cat 3516 1,825 kW generators to power the two GE 1,200 hp. electric motors turning the propeller shafts, as well as the dredging pumps.

The Jadwin was built by the Marietta Manufacturing Company, Point Pleasant, W.Va., in 1934, along with the Burgess. The steel hulls were 274 by 53 feet, and they were also dustpan dredges, steam with oil-fired boilers to power the Nordberg triple expansion condensing reciprocating engines for the twin propellers and the 1,800 hp. steam turbine that powered the 84-inch suction pump. The Marietta Manufacturing Company ad in the November 10, 1934, issue of The Waterways Journal featured these two dredges, along with the large sidewheel dredges the company had constructed for Missouri River service in 1932, and announced that two more of the sidewheel craft were to be built for the Kansas City District.

The Jadwin was named in honor of Maj. Gen. Edgar Jadwin, who as Chief of Engineers sponsored the Flood Control Plan for the Lower Mississippi following the disastrous 1927 flood.

In 1985, the Jadwin was converted to diesel electric power, and stern modifications included the addition of kort nozzles. In 2007, the pilothouse and crew quarters were extensively rebuilt. The Burgess was retired about 1993 and sold, but it is still in use at a grain facility at East St. Louis, Ill.

The efforts of these vessels, along with the newer dredges in the Corps fleet, such as the Hurley, are vital to keeping the channels open and traffic flowing during this extended period of low water.