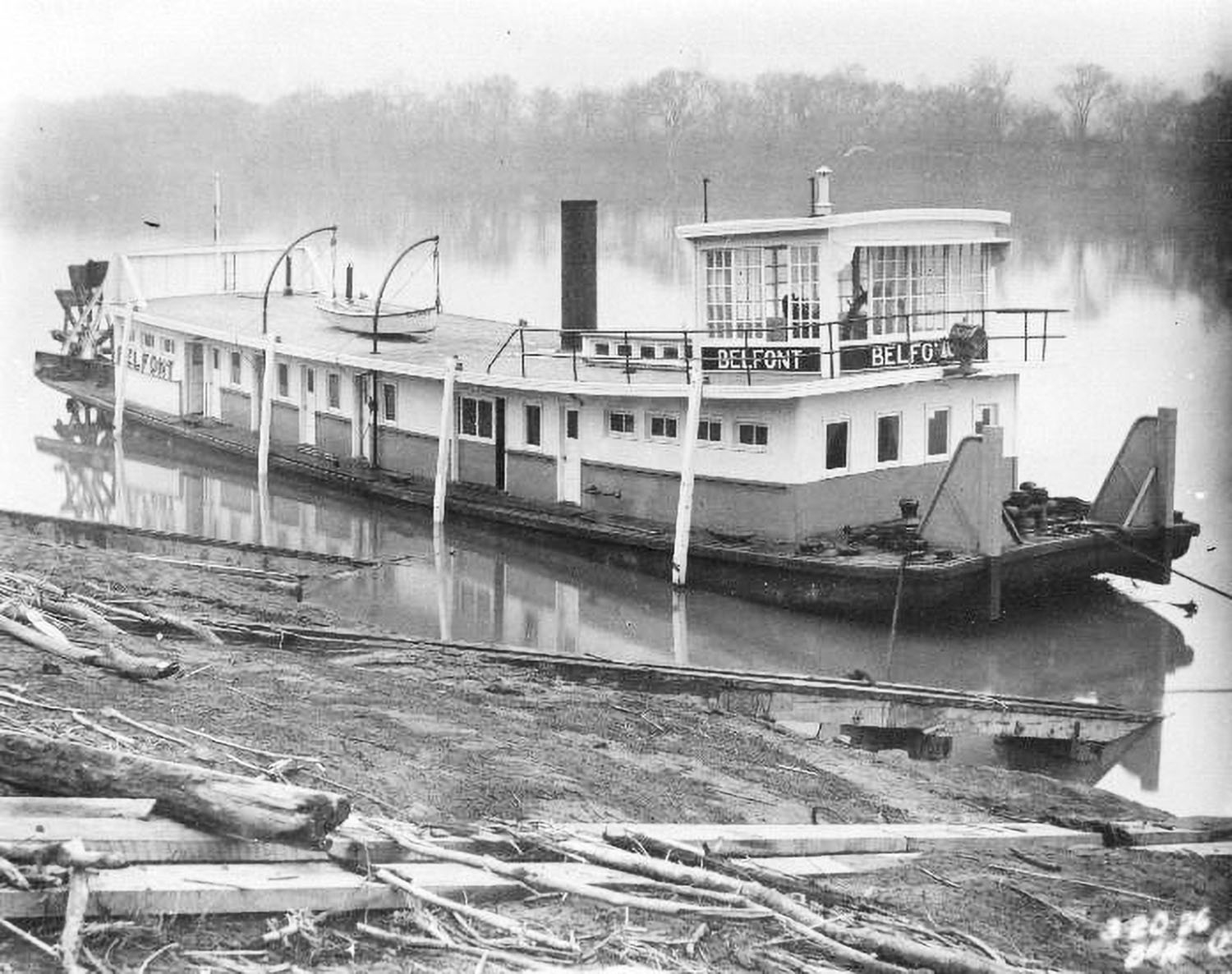 The Belfont Was Widely Traveled

Another boat featured in the 2023 Gas & Diesel Sternwheel Towboat Calendar (See WJ, November 14) is the Belfont. This boat was built in 1926 by the Marietta Manufacturing Company, Point Pleasant, W.Va., with a steel hull 100 by 24 feet. The split sternwheel had a shaft-driven gear drive at the center of the wheel, and this was powered by a 360 hp. Fairbanks-Morse diesel engine. The Belfont was a single-deck boat with a large pilothouse situated forward. The original owner was the Indiana-Belfont Transportation Company, Ironton, Ohio.

Just after midnight on May 24, 1928, the Belfont was upbound on the Ohio River above Madison, Ind. The steam sidewheel packet Cincinnati was downbound after having departed Carrollton, Ky., and there was a collision between the two. Homer Johnston, an engineer aboard the Cincinnati, was killed in the accident.

The Waterways Journal of January 11, 1930, carried an ad by the Indiana-Belfont Transportation Company offering the boat for sale or lease. It was sold to Pure Oil Company, which renamed it R.H. McElroy Jr. and sent it far away to Mobile, Ala., where it operated on the Mobile and Tombigbee rivers. It had just begun its wanderings.

In 1939, Pure Oil transferred the boat to the Cape Fear River, and it ran between Wilmington and Fayetteville, N.C. In 1942, it attracted a lot of attention by making a trip up the Atlantic Coast with three gasoline barges in tow. This was some feat by a flat-bottomed river towboat.

In 1943, the R.H. McElroy Jr. headed west when it was taken to Levingston Shipbuilding at Orange, Texas, and sponsons were added to the hull, increasing the width to 30 feet. The boat remained in operation on the Intracoastal Waterway, and in 1945 it was repowered in Texas with a 375 hp. Fairbanks diesel. It may have been at this time that the gear drive to the sternwheel was converted to a chain drive system.

In the fall of 1945, it again embarked on a long journey as Pure Oil transferred it to run on the Kanawha River in West Virginia. It was back home to where it had been built in 1926.

At some point during the boat’s career, the pilothouse had been raised several feet and a cabin placed aft of it. In 1948, the boat was sold to Capt. Edward Smith, Pittsburgh, who renamed it L.M. Smith. In 1954, it was sold to McClain Sand Company, Point Marion, Pa., and renamed F.L. Bowers.

In the fall of 1956, it was sold again to Merdie Boggs & Sons, Catlettsburg, Ky. This was the second boat in the Boggs fleet. Capt. Merdie Boggs and son Capt. Clarence Boggs had gone in business in 1955 by purchasing the 120 hp. sternwheeler Resolute and doing shifting and harbor work in the Catlettsburg area.

In 1960, Boggs traded the F.L. Bowers to Capt. Harry F. White, Belle, W.Va., for the dismantled steam sternwheel towboat Atlas, which they utilized as a landing boat. White dismantled the Bowers on the Kanawha River about 1962, and thus ended its wandering.

While this writer never saw the Bowers, I grew up at Boggs hearing the stories about it. Capt. Clarence Boggs and others have said that the Fairbanks engine on the boat was capable of more than 400 hp., but they operated it at less because if run full the wheel would turn too fast.

Capt. Merdie practically lived on the Bowers in those days, and another individual told of being aboard as a deckhand. They were coming upriver with a tow, and he was steering while Merdie was napping on the pilothouse bench. Anxious to get into the landing, this fellow kept inching the engine control ahead. At some point Merdie woke up to the boat shaking and the wheel throwing water over the stern splashboard. He jumped to the controls and pulled the engine back a bit saying, “This is where we run this boat!”

Capt. Clarence Boggs claimed that the Bowers was a poor backing boat—due to the added sponsons on the side of the hull, he felt—and that the 120 hp. Resolute would back better. It and the little Resolute were the seeds that grew what became a well-known family operation that served the industry for many years.