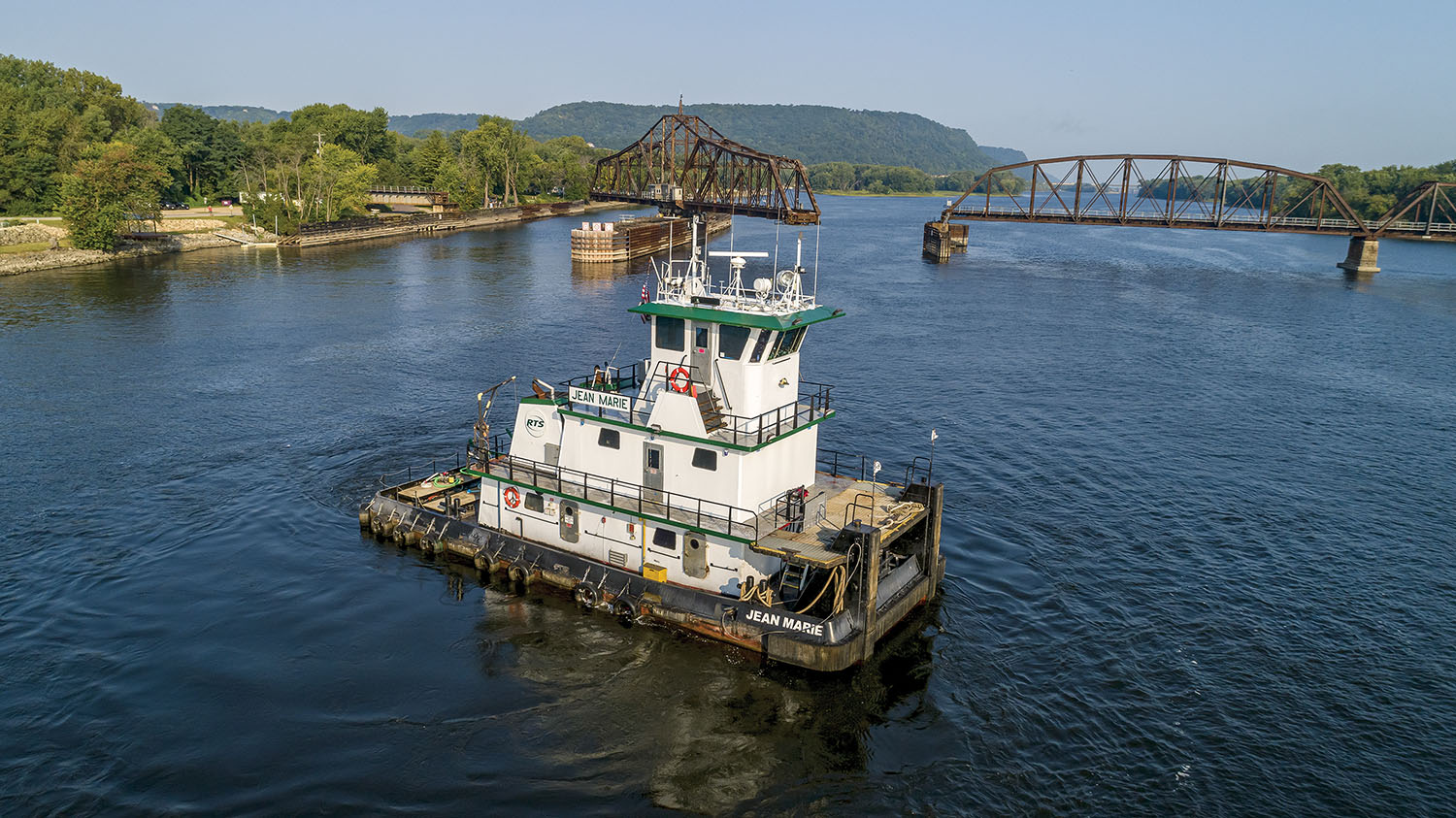 With the purchase of three boats and the lease of two in 2022, Riverview Tug Service is experiencing unprecedented growth.

The company, at Upper Mississippi Mile 557 in Bellevue, Iowa, began in 1998 as Riverview Boat Store with two employees. It now has between 65 and 70, said Jeremy Putman, president.

Putman credits the growth, in part, to a market for assist boats that grew at the same time as a high-water period in 2019 and workforce challenges associated with the COVID-19 pandemic afterward.

“With the high water comes the need for more-skilled pilots on the Upper, and with the labor shortage finding these skilled pilots has been hard for companies, so guys have become accustomed to these assist tugs at the locks,” Putman said.

Riverview Tug Service is now the largest assist boat service on the Upper Mississippi, he said.

The company has also expanded into providing some short-haul services on the Upper Mississippi, Missouri and Illinois rivers, mainly moving construction equipment.

“We started with groceries, added lock assists and now our company has found a niche in moving smaller tows that the bigger companies either can’t facilitate due to odd barge sizes or they simply are fully utilized,” Putman said.

Riverview purchased the Peggy Louise, formerly the Tracie L, from Quality Towing back in the summer. The twin-screw boat is 60 by 22 feet and was repowered in 2020 with Tier 3 Cummins engines for a total of 1,500 hp.

The boat was originally built in 1981 as the Cajun Star by C&M Shipbuilding in Bridge City, Texas.

The boat will be used in Riverview’s equipment transportation business. During the 2022 season, the Peggy Louise was used to move rock in Jackson, Mo., as well as the push the American Countess riverboat. To prepare for the winter closure of the Upper Mississippi, the boat was busy over the past few months staging equipment up and down the river, Putman said.

The Peggy Louise is named after the mother of Riverview port captain Mike Napper, Peggy Napper.

Putman said that it is important to him that longtime employees and their families are honored by getting to choose the names of some of Riverview’s boats, rather than having only administrators make those choices.

In a special coincidence, the naming of the Peggy Louise was announced on Facebook on its namesake’s 60th wedding anniversary in April, making it an extra special gift. Napper also got to visit the boat this summer when it visited Cape Girardeau, Mo., with the American Countess and climbed into the wheelhouse to check out the view and try her hand at steering for a moment.

“She was smiles from ear to ear,” Putman said.

Riverview purchased the Jean Marie, formerly the Susan Frances, from Marquette Transportation later in the summer, also for the equipment transportation business.

The boat was busy most of the season moving dry freight barges and construction equipment, Putman said.

The Jean Marie is named after Riverview Tug Service’s payroll manager, Jean Augustin, who has been with the company since 2010.

The Jean Marie is a twin-screw boat, 65 by 26 feet, built in 1981 by Fisherman Marine Shipyard in Bayou La Batre, Ala. It was originally called the Inland Tug II.

Riverview purchased and renamed the City of Bellevue, formerly the Sureboat, from Union Railroad in October.

The boat will be a replacement for the River Rat, once that boat is retired, Putman said. The River Rat was the company’s first boat, built in 1953, and is based at company headquarters in Bellevue. It was only fitting that the new boat be named after the company’s much beloved hometown, Putman said.

The City of Bellevue was transported to a Morgan City, La., shipyard earlier this month and will be sandblasted inside and out and fitted with all new wiring and electronics. New bumpers and a fleet deck will also be installed.

Putman noted that this is the third boat Riverview has bought that was built by Mississippi Marine and that it is a sister boat of the Francis J. Blank and the Mrs. P.

In addition to the new purchases, Riverview Tug Service leased two boats from Upper Mississippi Fleeting of Linwood, Iowa, this year. They are the Mike Voss and the City of Buffalo.

Caption for top photo: The 1,250 hp. mv. Jean Marie was acquired from Marquette Transportation this summer. (Photo by Mike Yuhas)