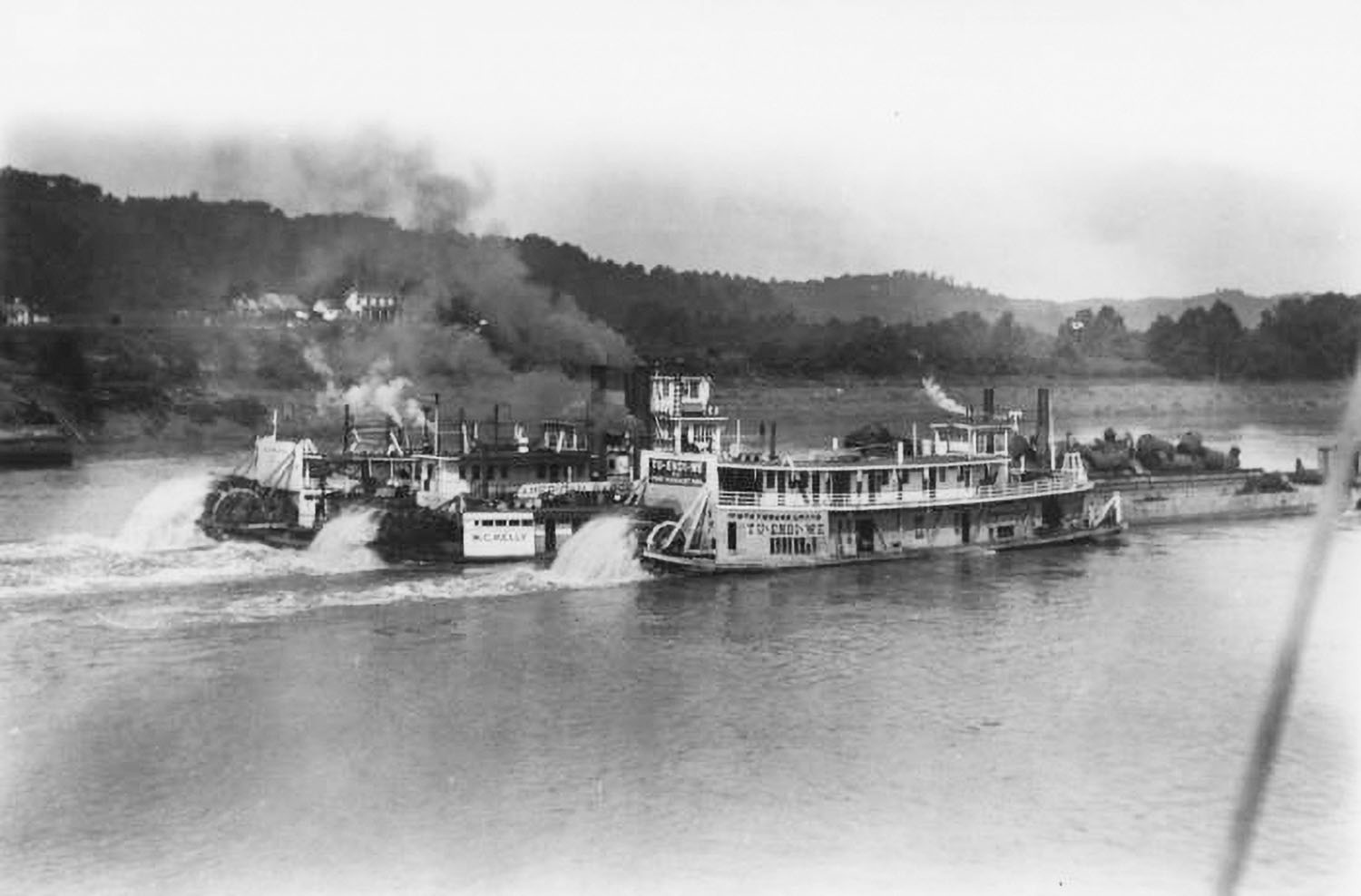 The Tu-Endi-We Was Named For A Prominent Spot

In the last column we looked at the Bessie E. Merrill, owned by Capt. Charles C. Stone of Point Pleasant, W.Va. It was mentioned that Capt. Stone dismantled his other steamboat, the Tu-Endi-We, about the same time he sold the Bessie E. Merrill in 1943. The Tu-Endi-We had been built by Howards in 1911 as the Merrill for the U.S. Engineer department. The names involved can become confusing, since Stone would later buy the General Craighill and give it a name containing Merrill!

The Merrill was sternwheel, with a wood hull 115 by 22 by 3.5 feet, and it had engines with11’s – 5-foot stroke. The boat cost $14,000 new, and it was assigned to the Muskingum River. Way’s Steam Towboat Directory lists some interesting information regarding the boat. It was commanded some 14 years by Capt. Oscar Webster, who was the father of Earl Webster, who would become well known on the Upper Ohio River as an owner and operator of diesel sternwheel boats. Way’s goes on to say that Capt. Oscar Webster’s father was Capt. Ed Webster, who had been a steamboat engineer on the packet L.C. McCormick when it exploded on the Muskingum River in 1879.

The year 1929 was an unfortunate year for the Merrill. Capt. Harry Burnside, master, contracted blood poisoning and died at Wheeling, W.Va. Later, in the fall of the year, Capt. Casper Cillus, pilot, died on board at Point Pleasant.

In 1931, the Merrill was sold at a public sale to Capt. Charles C. Stone for $3,650. He soon renamed the boat Tu-Endi-We. This unusual name was how Native Americans had referred to the area around the point where the Kanawha River joins the Ohio River. It is said to mean “mingling of the waters.” Not long after the purchase by Stone, the boat took part in the boat parade from Marmet to Charleston, W.Va., on the Kanawha River on the occasion of the 37th annual meeting of the Ohio Valley Improvement Association.

Capt. Stone used the Tu-Endi-We for towing on the Kanawha and Upper Ohio rivers. The Stone family had long been in the ferry business at Point Pleasant, with Capt. C.C. Stone taking over the business from his father, James H. Stone, in 1915. About the time he purchased the Tu-Endi-We in 1931, he started Stone’s Towing & Harbor at the mouth of the Kanawha.

The Tu-Endi-We was often mentioned in the news columns of The Waterways Journal during the 1930s as towing for Ashland Oil and others.

After the Bessie E. Merrill was sold to the French government, and the Tu-Endi-We was dismantled in 1943, Capt. Stone and his son Capt. Charles Henry Stone continued to operate diesel towboats such as the sternwheel George III and the twin-screw Alan R. Merrill that was the subject of the Old Boat column in the October 10, 2022, issue of the WJ. In 1946, they purchased the sternwheel steam towboat Alec Parnie, with intentions of converting it to diesel. For some reason the conversion never happened, and the boat was instead dismantled.

About 1966, the Stones sold out to Capt. Robert H. Bosworth. Capt. C.C. Stone retired, and Capt. Charles Henry Stone worked for Capt. Bosworth in his office until he retired.

The photo of the Tu-Endi-We in tow with several other boats has been a favorite of mine ever since I first saw it hanging in Capt. C.C. Stone’s office at his Point Pleasant home. Three boats of the American Barge Line had joined together to shove a tow up over the navigation pass at Ohio River Lock 29 at Ashland, Ky. The Tu-Endi-We had been coming up the river light boat and tied alongside to assist in the effort.

Capt. Charles Henry Stone passed away on June 19, 2010, at the age of 95. His mind remained remarkably clear, but he had lost most of his eyesight to macular degeneration several years prior. When the meetings and discussions regarding the upcoming Subchapter M regulations moving uninspected towing vessels into the inspected realm first began, I had been talking with him on the phone and asked him how the inspections had been on the family steamboats back under the U.S. Steamboat Inspection Service. He related that the inspectors had been true rivermen, and you certainly couldn’t get much past them. He then chuckled and related a story about the Tu-Endi-We. The crew was alerted that the inspectors were on their way to inspect the boat. The wooden hull had a hole in it under the ash box, and they knew that the inspectors would see water coming in when they raised a hatch cover. Charles Henry said that a side of bacon was taken from the cooler and stuffed in the hole. The bacon swelled and stopped the water long enough for the inspectors to get off.

The Str. Belle of Louisville came to Cincinnati for a staged race with the Belle of Cincinnati several years ago. My wife and I were aboard the Belle of Louisville and were delighted to find that Charles Henry and his wife Jean, along with their daughter and son-in-law, were on there as well. It was a cool day with a misty rain falling. Capt. Stone and I had been standing out on the deck when he turned to me and asked, “Would you take me down to the engineroom?” He was able to walk well and carried a cane, but he didn’t want to attempt it alone, considering his vision issues. We made it to the engineroom and stood close to the port engine. Capt. Stone stood there for a time, taking in the smells of hot steam and oil, then smiled and said, “I can’t remember the last time I was in a working steam engineroom!” That was one of the last times I was with him in person, and it remains a treasured memory.