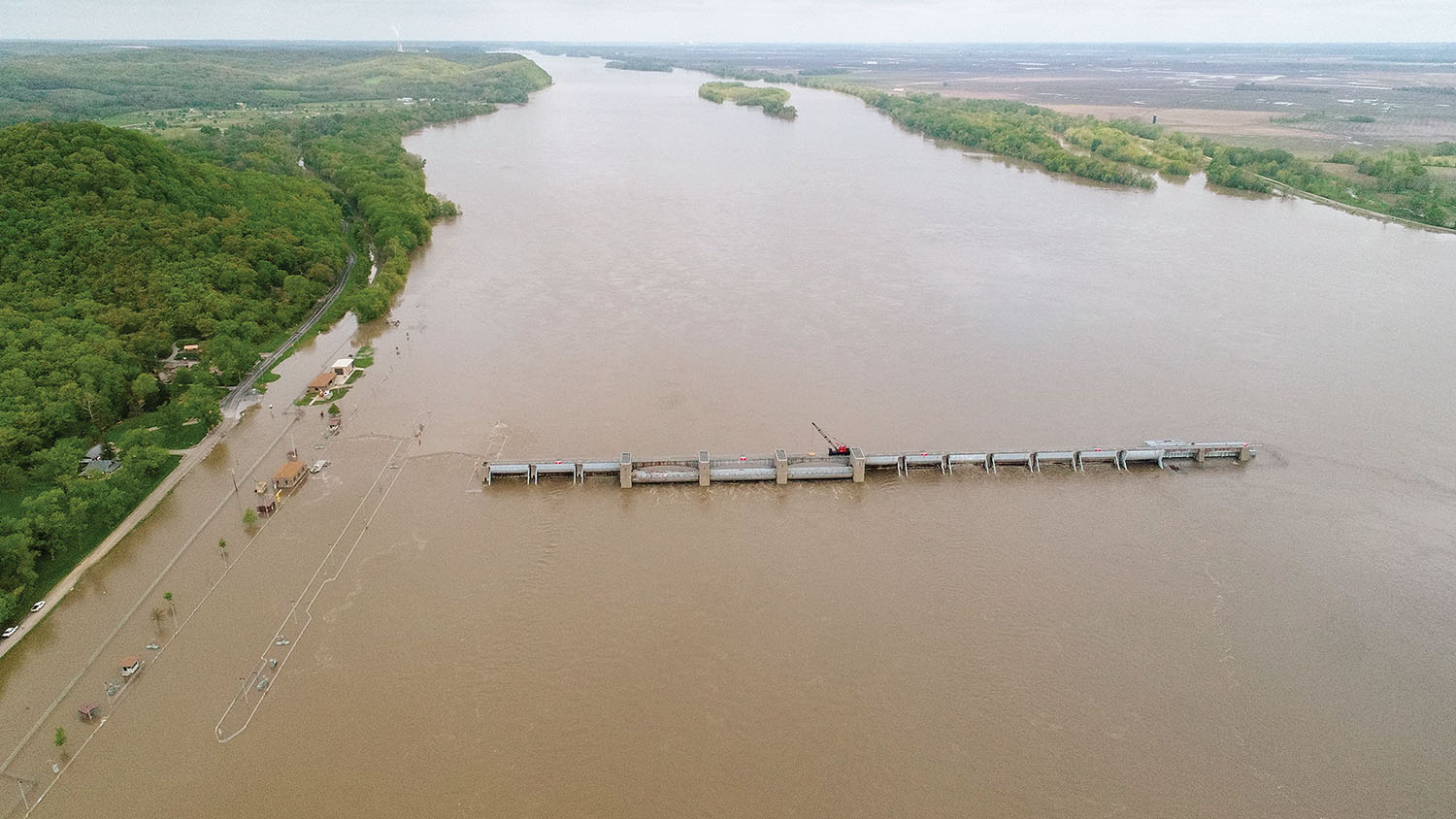 The new rains and high water closed Upper Mississippi River locks and made it more likely that at least some closures could extend past mid-May, depending on further rainfall.

According to the Rock Island Engineer District on May 9,  Locks 11 through 15 were open; Lock 19 was open, but with the possibility of closing May 10. Otherwise, locks 16 through 22 remained closed.

On the Illinois River, the Coast Guard issued a safety zone May 7, restricting all vessel traffic from Mile 187 to Mile 145.6 and Mile 80.2 to Mile 10 due to extremely high water levels and fast-moving currents. Vessel operators could request permission to move within the safety zone from the captain of the port representative at Coast Guard Sector Upper Mississippi River via Channel 16 or at 314-269-2332.

At press time, Melvin Price and Chain of Rocks locks above St. Louis remained closed to navigation. According to a Coast Guard Sector Upper Mississippi River spokesman, some Upper Mississippi locks were open to limited local traffic on a case-by-case basis.

St. Louis Harbor remained closed to traffic after a May 2 incident in which the mv. Legacy struck Eads Bridge, shearing off its pilothouse. No one was injured (WJ, May 6).

“During this extended period of high water, public safety is our No. 1 priority,” said Capt. Scott Stoermer, Captain of the Port, Sector Upper Mississippi River. “I urge commercial and recreational boaters to heed all safety advisories to avoid potentially dangerous conditions caused by floods and fast-moving water.” Restrictions to operations will be lifted as soon as conditions improve, he said.

Stoermer was working according to a Waterways Action Plan jointly worked out by the maritime industry, Coast Guard, Corps of Engineers, state and local governments. The plan facilitates the safe and orderly movement of traffic during extreme conditions on the inland rivers.

Missouri River floods have caused more than 60 levees to breach, resulting in an estimated $3 billion worth of damage. On May 3, Sen. Jodi Ernst (R-Iowa) and nine of her Senate colleagues representing Missouri River basin states sent a letter to Brig. Gen. D. Peter Helmlinger, commander of the Corps’ Northwestern Division, requesting improved communications between the Corps and local communities on flood control measures.

In the letter, which Ernst posted to her website, Ernst and the other senators requested that the Corps start sending email updates to all local sponsors of Corps levees in the Missouri River Basin on a weekly basis beginning within 30 days of receiving their letter. They also urge such weekly email updates every year during flood season, beginning in January.

Along some parts of the Upper Mississippi, flood levels are approaching those of the 1993 floods, which set 92 records. On May 2, river levels in the Quad Cities (Davenport, Iowa; Rock Island, Ill.; Moline and East Moline, Ill., and Bettendorf, Iowa) broke a 1993 record.

Calhoun County, Ill., which lies between the Mississippi and Illinois rivers north of St. Louis, declared a state of emergency May 7. The sheriff appealed on Facebook for residents to help with sandbagging efforts to protect local businesses.

In southern Illinois, the Kaskaskia River, which originates in central Illinois and joins the Mississippi south of St. Louis, was also flooding.  The river level at New Athens was at 88.64 feet May 8; flood stage is 79 feet, according to the National Weather Service’s hydrologic prediction service. The Mississippi River has also been forcing backups into the Kaskaskia from its mouth.

Three deaths in Missouri and one in Indiana have been blamed on the floods.

River levels have not been abnormally high on the Ohio River, however. On May 8, river levels at Smithland Lock and Dam were recorded at 35.43 feet, more than 4 feet below flood stage. The National Weather Service is forecasting a fall-off in Ohio River levels at the lock beginning May 13. To protect workers working on the lock walls, Smithland is currently enforcing slowdowns of passing towboats.

The National Weather Service issued flood warnings May 8 for most Arkansas rivers. Arkansas has been experiencing flash flooding across the state since March, but navigable rivers are also swollen. The Ouachita River, which flows through central Arkansas, was bracing for predicted rainfalls of 3 to 6 inches between May 7 and May 12, which would bring it up to flood stage of 48 feet.

Farm publications have been reporting that the lock closures and high-water restrictions were delaying barge shipments of fertilizer to northern Midwest farmers.

Soils have been so waterlogged since late fall that some farmers missed fall applications of fertilizer. Plantings in much of the upper Midwest are already delayed as farmers wait for soggy soils to dry out and keep an eye on further projected rainfall.

Concern about flooded fields, late planting and possible reduced yields and acreage is being reflected in the price of grains, especially corn. One trader reported in Progressive Farmer magazine that corn futures were short a record-high 344,185 contracts, giving corn prices a “bounce.”

Caption for photo: Only the outlines of the lock walls can be seen as Upper Mississippi River Lock and Dam 22 is swamped by floodwater. (Photo courtesy of U.S. Army Corps of Engineers, Rock Island District)