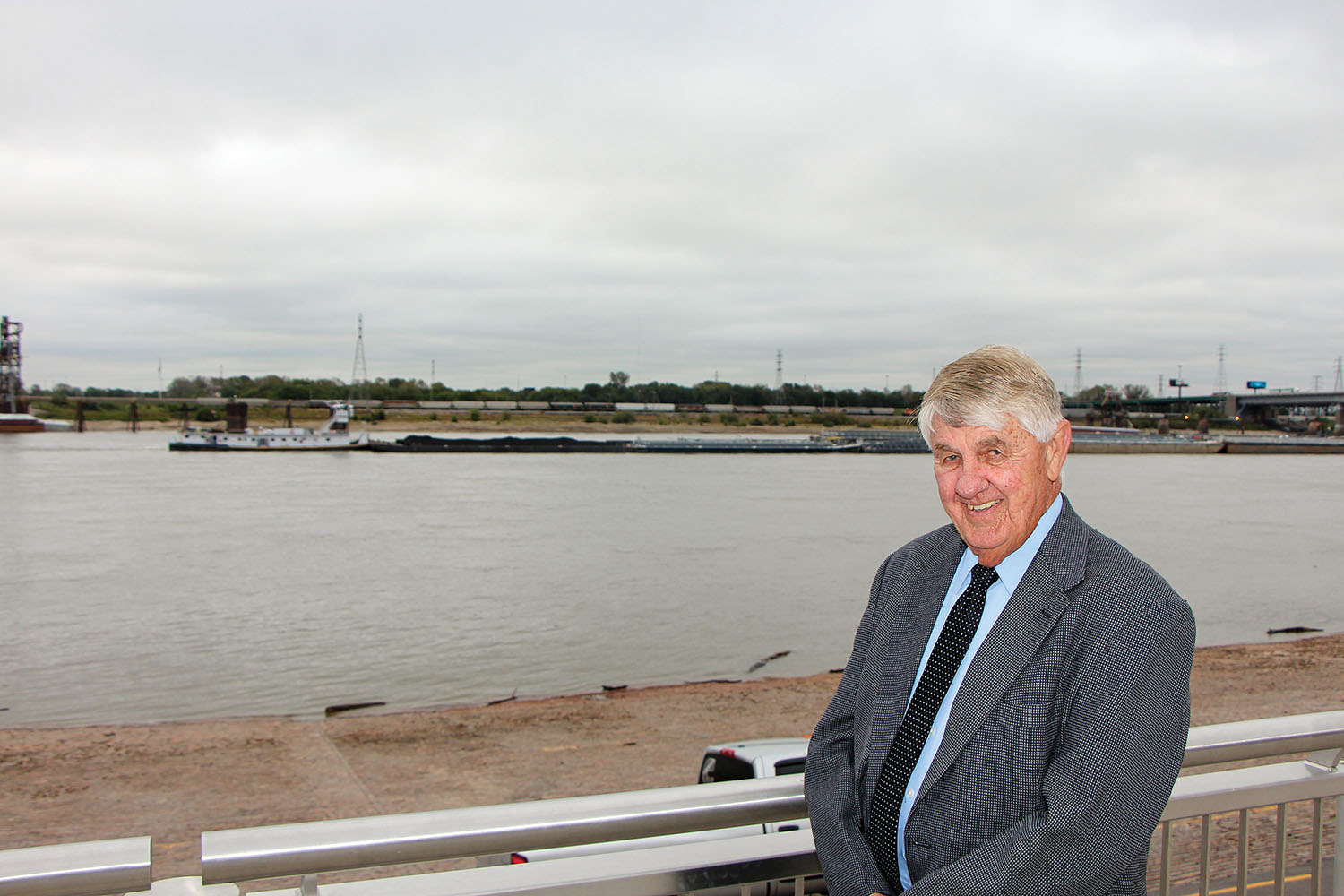 It’s often said there’s no better way to become acquainted with someone than to spend an afternoon on the golf course. That certainly holds true in the case of Nick Nichols, who is the operations manager of the City of St. Louis Port Authority. To play golf with him is to know him.

For example, if you and the other parties in your foursome were to stand on the first tee of a golf course discussing the weather—waiting for, say, Nichols to tee off—you most likely would miss seeing his drive. He will have already stepped up and hit the ball, without a practice swing or other pre-shot routine, before you could say, “Nice day, isn’t it!”

And so it is that the longstanding operations manager is able to keep a handle on the many facets of one of the busiest ports on the Mississippi River.

Along the 20-mile stretch, between Miles 170 and 190 roughly, that comprises the city’s port district, are numerous barge fleets, harbor services, grain elevators, scrap metal yards, concrete plants, transfer facilities for coal, chemicals and petroleum products, barge repair facilities, fertilizer storage warehouses and other river users who lease from the city. Then, there is the city’s Municipal River Terminal, a public general cargo facility with a 90,000-square-foot warehouse, 27 acres, and a 2,000-foot dock, operated by SCF Lewis & Clark Terminals. And, along the central riverfront at the Arch, many excursion vessels visit St. Louis under the purview of Nichols.

The Port of Metropolitan St. Louis, which includes the port district and encompasses 70 miles between Alton, Ill., and the south edge of Jefferson County, Mo., bills itself as the largest, northernmost ice- and lock-free port on the Mississippi River. It enables St. Louis to handle close to 35 million tons of freight each year, with about half of that crossing the city’s waterfront, said Nichols. “It is the third-largest inland port in the country,” he said, “serving as a storage, commodity transloading (barge, rail and truck) and distribution point for a great variety of goods, including, for example, wheat for China, livestock feed from Europe and the Orient, food for Bombay and Calcutta and lumber products for Germany.”

Born and raised in Collinsville, Ill., where he said he played golf on a course with cinder greens for 50 cents a round, the 81-year-old Nichols had already notched up one successful career before joining the Port of St. Louis. He spent 24 years in the U.S. Air Force.

After graduating from the University of Tampa in 1958, he joined the Air Force and was first sent to Dover, Del., where he trained on fighter planes. He was later transferred to Ft. Lee, Va., for ground radar control intercept training, he said, and eventually to Japan as an advisor.

Next, when stationed in Hawaii and Charleston, S.C., he served as a navigator on C124 and C141 cargo jets, delivering supplies to the troops in Vietnam for the duration of the war. He said he was shot at many times, but never shot down. He completed a Master’s Degree in Aerospace Management while he was in the Air Force and eventually reached a point that warranted his relocation to Scott Air Force Base, near Belleville, Ill., to evaluate flight crews, which he did for the last 10 years of his military career.

Nichols said he flew all over the world, amassing some 8,500 hours of flight time. He retired as a Lieutenant Colonel from Scott Air Force Base in 1982 and, the very next year went to work for the St. Louis Development Corporation, which houses the St. Louis Port Authority.

Nichols was quick to point out that he is merely a part of a highly-qualified and talented team that runs the port. He credits Otis Williams, executive director; Susan Taylor, director of port development; and Mary Giammanco, port secretary, for the port’s many successes. He mentioned the members of the port commission, too: Matthew McBride of Lashly & Baer PC, chairman; Joan Miller, treasurer; the Honorable Marlene Davis, Ward 19 alderwoman; Jamie Wilson, director of streets; Judith Doss and Taunia Mason.

Nichols is most proud of the expansion of the municipal terminal over the years, the most recent development being the rebuilding of the South Dock and its connection to the North Dock for a total of 2,000 feet in 2013. “It’s absolutely the best facility on the river,” he said. He also spends a great deal of his time ensuring that the permitting processes between not only the port but other agencies and its tenants along the downtown riverfront go smoothly.

One of those tenants, Tom Dunn of Gateway Arch Riverboat Cruises, who operates the Becky Thatcher and Tom Sawyer excursion boats and has worked with Nichols for over 30 years, refers to him as their “go to guy.” When it comes to riverfront issues, such as levee maintenance, debris removal, flooding, vehicle traffic and parking, Dunn said, “we depend on Nick to help us out. In addition, our city permitting goes through his office.”

The new construction on the Arch grounds and the redesign of the riverfront roadway, Leonor K. Sullivan Blvd., have brought many operational changes, added Dunn, and “Nick has been of great assistance.”

Dunn also noted the revival in recent years of the overnight vessel business, saying “Nick coordinates their docking arrangements, permitting and Homeland Security requirements. This season, boats arrived on the St. Louis levee over 20 times, and the number of visits will increase with the introduction of new boats in the future. Nick Nichols’ service and experience have always been appreciated.”

With demand for his services sure to grow, Nichols gives no thought to retirement. Remind him of his age and he pretends not to hear you. (Could be he doesn’t, you think—after all, he’s 81—but then again, like his golf game, it’s more likely he has already teed off, so to speak, and is lining up his next shot.)