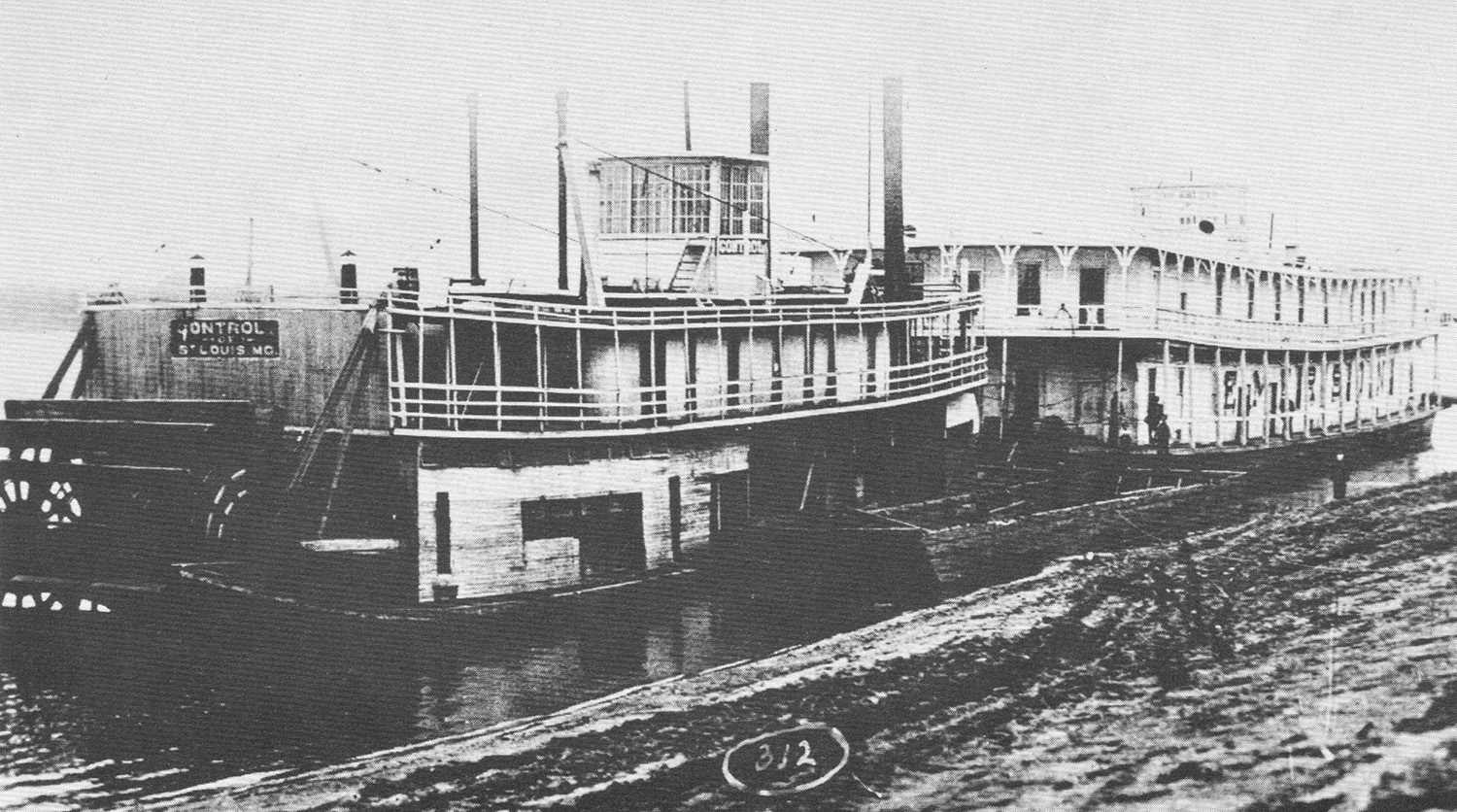 There were two towboats named Control.

The first, built in 1904 by the Howard Shipyard at Jeffersonville, Ind., was constructed on a wooden hull measuring 118 feet in length by 27.5 feet in width.

Much equipment from the rafter Sam Atlee (built 1881) was recycled for the new vessel. The engines (manufactured in 1867 by Snowden & Sons of Brownsville, Pa.) had 10-inch cylinders with a 4.5-foot stroke and had earlier done service on the centerwheel ferry Keokuk.

The Control had a varied career and was owned by the Gray-Winans Construction Company and later the Missouri Valley Construction Company of Greenville, Miss. The sternwheeler was sold in February 1920 to Capt. Ralph Emerson, who used it to tow his Goldenrod Showboat. Emerson’s towboats had a reputation for being short-lived, and the Control was no exception. On the evening of March 15, 1921, the vessels were upbound on the Ohio River when the towboat suddenly sank in 30 feet of water at the head of Yellow Bank Island, some three miles above Owensboro, Ky.

Fortunately, there were no injuries, but the U.S. Inspectors investigated to determine the cause of the sinking. Various crew members, including Capt. Theodore Johnson and Chief Engineer George Emick, were summoned to a hearing. Old wooden hulls were notoriously vulnerable to wind and waves, and it was reported that there had been rough swells at the foot of French Island and again while passing Owensboro. Emick testified that he had periodically tried the syphons on the way up the river and consistently found the hull of the steamboat to be dry.

Both Emick and Johnson concurred that the sudden sinking was not the result of striking a snag, as area newspaper accounts had stated. The rivermen were of the opinion that the accident was due to the fact that a stop had been made at Evansville, Ind., where 1,600 bushels of coal had been loaded aboard. The weight of the coal naturally caused the Control to ride lower in the water. It was noted that the chains, ratchets and lines leading from the head of the towboat to the stern of the showboat had not been slackened, resulting in a lifting action at a 45-degree angle. It was concluded that the deck of the Control parted from the hull, causing a hogchain to puncture it; the boat was a total loss.

Originally constructed in 1906 by the Howard Shipyard at a cost of $16,650 as the pleasure steamboat Scimitar II, this vessel was acquired and renamed by the U.S. Army Corps of Engineers, which replaced the wooden hull with a steel one, built by Dravo, in 1921. The new hull (135 feet long by 26 feet wide) was towed from Neville Island, Pa., to Vicksburg, where the upper works of the Control were placed aboard.

Long the flagship of the Vicksburg Engineer District, the boat was sold at public sale in 1940 to Capt. George Prince, who sold it a year later to new owners at Harvey, La. The Control was dismantled shortly thereafter.