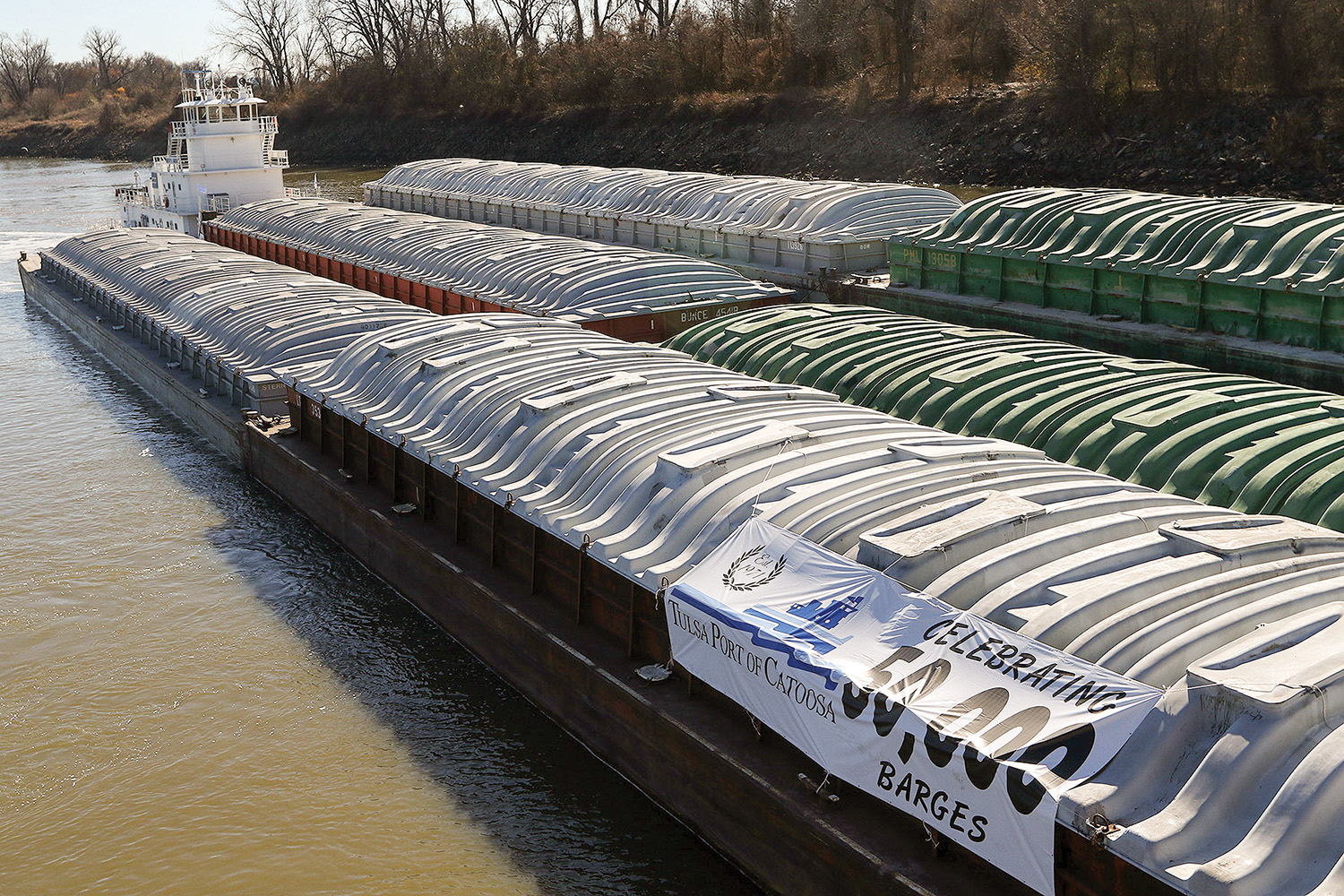 Each day, tens of thousands of tons of waterborne freight move quietly along the McClellan-Kerr Arkansas River Navigation System (MKARNS). Commodities like wheat and soybeans; raw, processed and scrap steel; fertilizer, gravel and manufactured goods move to and from the communities of Pine Bluff, Little Rock and Ft. Smith, Ark., and Muskogee and Tulsa, Okla.

On December 11, the Tulsa Port of Catoosa received the 50,000th barge in the port’s 46-year history. The barge was loaded with processed coil steel, said David Yarbrough, port director. Since 1971, when the first barge arrived at the port containing 650 tons of newsprint, more than 82 million tons have been shipped or received.

“Our 50,000th barge is an incredible milestone and a fitting testimony to those visionary men and women who worked so hard to establish waterway navigation in our state, and to construct an inland waterway port in Tulsa, Okla.,” said Chip McElroy, chairman of the Tulsa Port Authority Board. “Today, in the MKARNS, we have a system that provides flood control, navigation, hydropower generation and enhanced recreation to the states of Oklahoma and Arkansas.  Here in Tulsa, the port provides over 3,500 jobs and we annually ship about 2.5 million tons of waterborne freight.”

What is even more compelling is that each barge carries the equivalent load of 60 semi-trucks.  “When you have a 12-barge tow, that adds up to 720 trucks replaced by one towboat,” said McElroy.  “That’s 720 trucks that aren’t on our interstate highways, consuming fuel and adding airborne pollution.”  Barge transportation is not only the most cost-effective manner of moving goods, it is also the greenest, with lower emissions and higher ton-miles of cargo moved than any other mode of transportation.

The Port of Catoosa’s 50,000th barge is operated by Marquette Transportation Company, Paducah, Ky., and is under an affreightment  contract to Cooper Consolidated LLC, Covington, La. It was towed to the Port of Catoosa by the 4,000 hp. mv. Dorothy M. Janoush of Jantran Towing, one of the principal operators of towboats on the MKARNS based in Rosedale, Miss.

The barge is being unloaded by Watco Tuloma Stevedoring and the steel will be delivered to port-based Steel & Pipe Supply Company. Steel & Pipe Supply will process the coil steel into flat, custom, cut-to-length plates of steel that will be shipped to its manufacturing customers in Oklahoma and neighboring states.

The port said that the milestone barge was adorned with a banner that reads “Celebrating our 50,000th barge.”