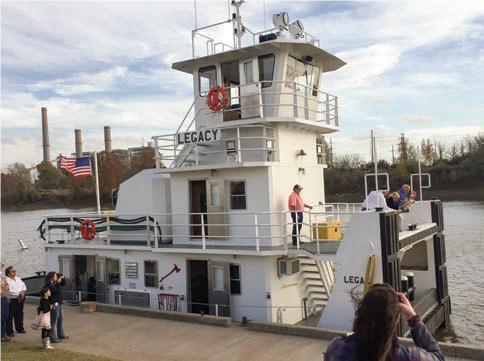 Oakley’s Port 33, Catoosa, Okla., took delivery of a new harbor boat recently. Built by Jantran Inc., at its Rosedale, Miss., shipyard, the new boat measures 56 feet long by 24 feet wide, and has a draft of 7.6 feet. Horsepower is 1,320 from a pair of Cummins QSK-19 electronic diesel engines with 6:1 Twin Disc reduction.

Named the mv. Legacy, the vessel was designed specifically to work at Oakley’s Port 33 in Catoosa, said Steve Taylor, vice president. “We wanted a quick and agile boat with enough horsepower to work in the high flows of the Arkansas River,” he said. “But, it also had to be light enough to be lifted with the overhead Travelift owned by the Port of Muskogee, where it will work temporarily.”

Taylor credited the design team consisting of Hayden Pearson of Jantran, and Fred Taylor and Phil King, both of Port 33 Catoosa, with coming up with the layout and engineering specs to successfully meet these challenges. “Everything has been a success with the boat, from start to finish,” he said, adding, “Thanks to Jantran for a job well done.”

Ship’s power for the Legacy is provided by twin John Deere 50 kw. generator sets. It has a fuel capacity of 7,000 gallons, water capacity of 3,200 gallons and lube oil capacity of 800 gallons.

The new harbor boat was delivered in November to Oakley’s Muskogee terminal, where it will substitute for another boat, the mv. Elizabeth Ann, until after that boat receives a new bottom. Then, it will move on to Catoosa, which will be its homeport.

In a naming contest, Shawn Kincaid submitted the winning selection. A christening, organized by Kimbra Scott, was hosted by the Port of Muskogee.