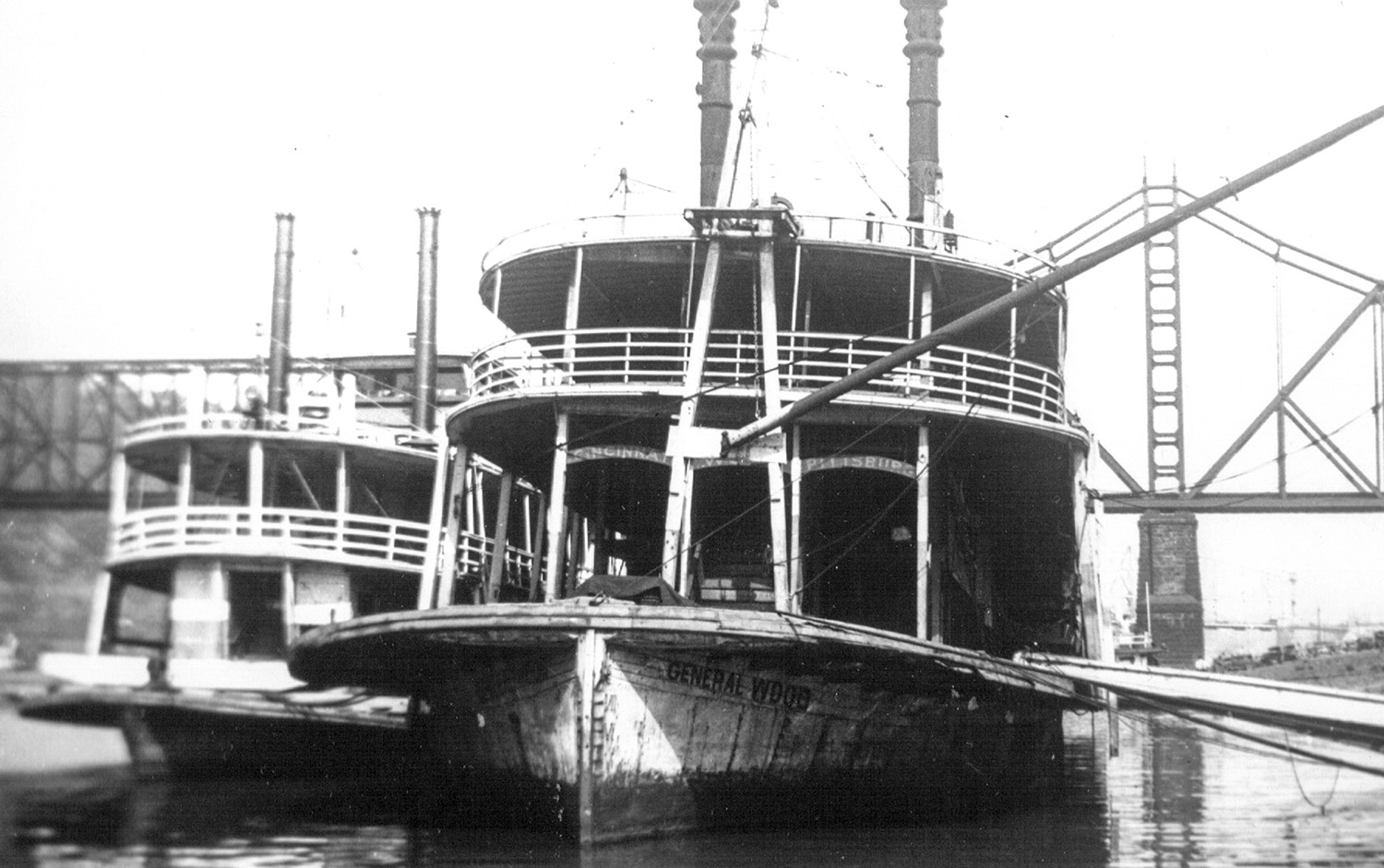 The General Wood And Helen E.

This week, the Old Boat Column presents two images of Upper Ohio River packet boats that are part of a photo collection generously given to this writer by the late J.W. Rutter, former president of the Sons & Daughters of Pioneer Rivermen.

The General Wood was built in 1913 at Slidell, La. Originally named S.L. Elam to honor a judge at Natchez, Miss., the sternwheeler was constructed for the Carter Brothers firm of New Orleans on a wooden hull that measured 181.9 feet in length by 29.8 feet in width. Three boilers supplied steam to compound non-condensing engines having 12- and 24-inch cylinders with a 6-foot stroke.

The boat was purchased by the Liberty Transit Company of Wheeling, W.Va., in 1918, making one Pittsburgh–Cincinnati trip under its original name. The riverboat was then renamed and remodeled into an Ohio River packet, with the removal of the cotton guards and alterations to the cabin.

The vessel was placed into the Pittsburgh–Cincinnati trade with Capt. William Kimble as master. Shortly thereafter, Capt. Ed Dunaway assumed command, with Capt. Dayton Randolph and Capt. Edgar Brookhart as pilots. The engineroom was presided over by chief engineer Lee Markham with Charles Douglass in charge of the purser’s office.

The Liberty Transit firm folded in 1923 and the Wood was purchased by the Pittsburgh, Wheeling & Cincinnati Packet Company in April of 1924. Continuing in the Pittsburgh–Cincinnati trade, Capt. Fred Hornbrook took charge of the boat, with Fred Hoyt as purser and William Pollock as clerk.

In early 1927, Hornbrook and Hoyt sold their interest to Bill Pollock and Fred Way Jr. From that time into 1929, the Wood teamed up with the Betsy Ann, managed by Pollock and running in the Pittsburgh–Cincinnati (P&C) trade. In the autumn of 1929, the boat was laid up at Pittsburgh.

In November 1934, the sternwheeler was sold to Pete Milliron, of East Liverpool, Ohio, for use as a wharfboat at that city. During the winter of 1936, the boat sank in the ice and the wreckage collected below Lock and Dam 8, where the remains were scrapped and burned later that summer.

Built at Point Pleasant, W.Va., in 1913, this small sternwheeler was constructed on a wooden hull that was 105 feet long and 20 feet wide. One of the original shareholders was Capt. Gordon C. Greene.

Named for Helen Elizabeth McDade—daughter of the boat’s master, Capt. W.E. McDade—the boat gained notoriety in 1918 when it broke loose at Point Pleasant in an ice gorge and ended up below Madison, Ind., a distance of 293 miles. No one was aboard; the vessel was unharmed and eventually returned home under its own steam.

Later that summer, the steamboat was sold to new owners who added a boiler deck cabin and operated the boat in the Wheeling–New Matamoras trade until 1930. The Helen E. was run briefly in the Pittsburgh–Parkersburg trade in 1931, until the boat was sold in 1934 to Ben Raike who rebuilt it into a towboat named Clairmont.