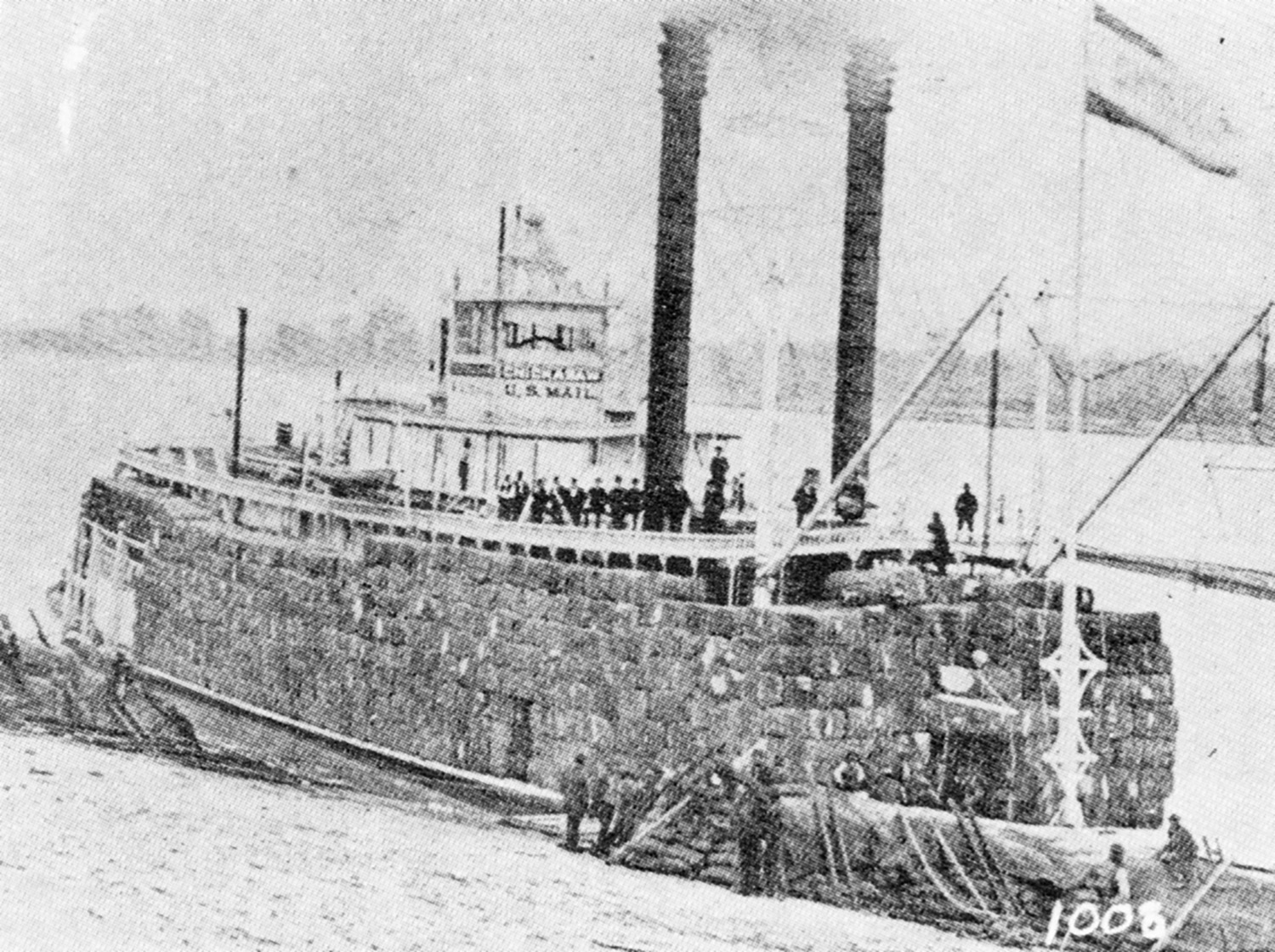 Built at cost of $65,000 by the Pittsburgh firm of James Rees & Sons, the Chickasaw underwent its initial inspection on October 29, 1883. The wooden hull measured 185 feet in length by 38 feet in width, with a depth of 6.6 feet. Three boilers supplied steam to engines having 16-inch cylinders with a 7-foot stroke. With a light draft of just 28 inches, the sternwheeler had a capacity of 1,650 cotton bales.

Owned by the Memphis & White River Packet Company, the steamboat, with Capt. Ed Postal in command, arrived at Batesville, Ark., on its maiden trip on November 28, 1883. Schools were closed for the Thanksgiving holiday and a public celebration was held, with crowds invited aboard the new boat. A principal pilot on the first trip was Capt. Edward Warner of Memphis.

By 1891, while operating in the Memphis-White River trade, the owners of the boat were Capt. Postal, Sam Brown, of Pittsburgh, and Capt. James H. Rees, of Memphis.

While some 28 miles below Memphis, with Capt. Green Snow on watch in the pilothouse, the Chickasaw struck a snag and sank on October 6, 1891. Reportedly, the pilot asked the watchman to take the wheel for him while he had a cup of coffee. Snow had just finished his coffee when the accident occurred. No lives were lost and there were no injuries. However, damage to the vessel was estimated at $20,000, with the loss of cargo set at $25,000.

Initially, it was thought that the boat was a total loss and the steamer Rowena Lee was sent down to take off the cargo. After further investigation, it was decided that the riverboat could be raised and repaired.

While the vessel was making a landing at Helena on October 14, 1885, cotton stowed in the hold caught fire. Prompt action by the crew in quickly throwing the blazing bales overboard saved the steamboat from disaster; the cotton loss amounted to $4,700. Another incident occurred at Moon’s Landing on March 10, 1894, when deckhand Dick Withers died after being struck with a stick by deckhand Pete Anderson.

In a 1965 letter to The Waterways Journal, Capt. N.B. Price, of Shreveport, La., recalled receiving a letter from a gentleman who resided on the White River at St. Charles, Ark., and who remembered the occasion when the Chickasaw remained at the landing after midnight until his uncle, Sen. Byron Price, had been married to the daughter of Major J.J. Wolfork. When the ceremony was over and the gala reception concluded, the bride and groom were ready to embark on their wedding trip. After the boat was well underway it was discovered that the bride’s trunk had been left behind, necessitating a return trip to the wharf.

In its latter days, the Chickasaw was purchased by Lee Line Steamers, of Memphis, which subsequently sold it in 1897 to New Orleans, where the boat operated to Bayou Lafourche with Capt. J.J. Dodd as master.

The Chickasaw was wrecked in a severe storm that struck New Orleans on August 14, 1902. The machinery was salvaged for use on the new Pittsburgh towboat Charley Jutte, built in 1904 by the Howard Shipyard at Jeffersonville, Ind.