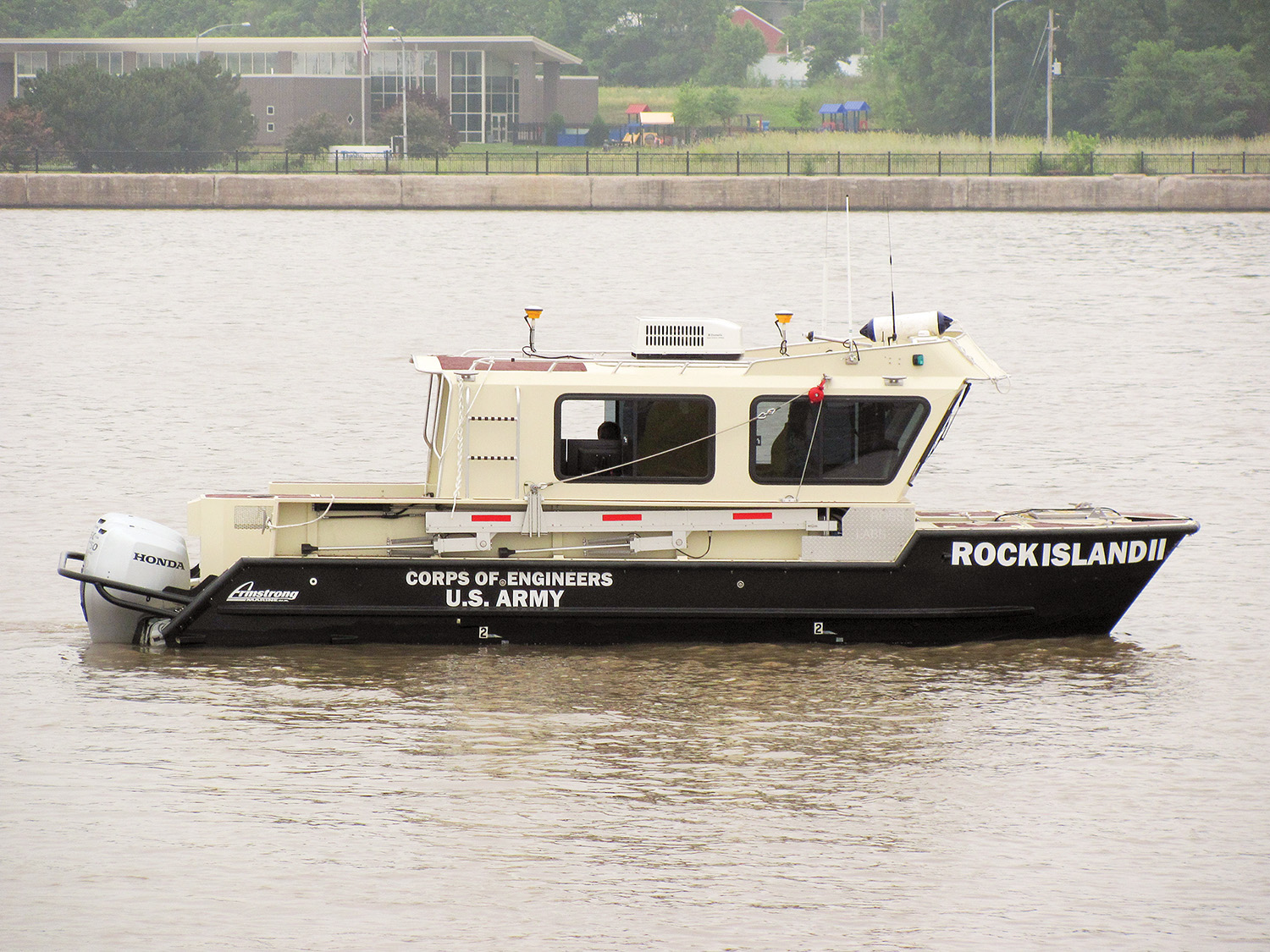 The Rock Island District’s two new hydrographic survey boats are at work on the Mississippi and Illinois rivers. They were commissioned at District headquarters the week of June 4.

Dubbed Rock Island I and Rock Island II during manufacture, the names of the boats—the Clark and the Dubuque, respectively—were approved by Corps Headquarters on June 8, and new name plates will be installed.

The Dubuque will handle the 314 miles of Mississippi River navigation channel between Guttenberg, Iowa, and Saverton, Mo., and the Clark will survey the 268 miles of navigation channel on the Illinois Waterway between Chicago and the LaGrange Lock and Dam, southwest of Beardstown, Ill.

The Dubuque is named for the Iowa city of the same name, and the Clark honors Rock Island District employee James H. Clark, who worked for the district for 18 years following a Coast Guard career. He died in 2015 at the age of 71.

The boats will be used for hydrographic survey in support of the dredging and navigation missions of the Rock Island District.

“They will primarily run cross sections of the navigation channel for condition surveys and will do multi-transducer sweep surveys for pre- and post-dredge surveys to calculate dredging volumes,” said Jon Klingman, chief of Rock Island’s Channel Maintenance Section. “Both vessels have been fitted with R2Sonic multibeam systems for condition and scour surveys at our lock and dam facilities.”

The district maintains 20 lock and dam sites—12 on the Mississippi River, and eight on the Illinois.

On the Illinois River, maintenance dredging is performed by a contract hydraulic dredge, and the Corps Dredge Goetz handles the hydraulic work on the Mississippi.
“Mechanical dredging is limited to small jobs and is handled by government strike-removal crews on both rivers,” Klingman explained.

The boats are sister vessels, 25-foot aluminum catamarans identifiable as Corps boats by their black hulls and tan pilot houses, with the Corps logo and vessel names on the hulls.
The Dubuque began work the first week of June in Pools 15, 14 and 13, and the Clark started in the Illinois between Peoria and Beardstown. The district includes Upper Mississippi Pools 24 upstream to 11, and eight pools on the Illinois Waterway beginning at Mile 80 at the LaGrange Lock and Dam, upstream to Chicago at Mile 325.

“Major drive-line and other components need to be replaced,” he said. “We downsized the new vessels to allow us to trailer each vessel, thereby improving our response time to vessel groundings and other channel emergencies along the approximately 300 miles of each river within the district,” he said.

Jim Ross, manager of sales and technical support for Ross Labs LLC, Edmonds, Wash., said “We were awarded the contract (for the vessels) last fall. The contract was initially for one boat with an option for the second, which was approved shortly after the new year. We placed the order for two boats with Armstrong Marine in Port Angeles, Wash. While the boats were in production, we manufactured the boom and electronics systems. These boats and systems are essentially sister ships for Launch 22 and Launch 23 that we delivered in 2013 and 2017 respectively to the St Paul District,” he said.

The first boat, the Rock Island I/Clark, was delivered by Armstrong on February 16, and the Ross team began installing the hydrographic survey hardware and software.

Survey Equipment
Each boat is equipped with the following:

The district’s primary mission upon its establishment in the 1880s was navigation, and it engaged in construction and maintenance of the then 4½-foot Mississippi River navigation channel. The modern 9-foot channel allows safe transportation for barge traffic carrying hundreds of millions of dollars in interstate commerce each year.

According to the district’s website, its waterway navigation system is the second longest of any Corps district and the number of locks and dams it manages ranks second within the Corps.

Operating the locks and dams is a continuous job; tows and recreational boats can lock through all year long if weather conditions permit. The nine-foot channel lock and dam system was built in the 1930s with an estimated life span of 50 years. The structures have long outlived their life expectancy, but continue to operate every day of the year, 24 hours a day.

Each year, more than 90 million tons of cargo and more than 100,000 boats and barges pass through the Rock Island District’s locks on the Mississippi and Illinois rivers, and 70 percent of the district’s resources are devoted to operating and maintaining the navigation system, which includes the shipping channels and lock and dam systems.