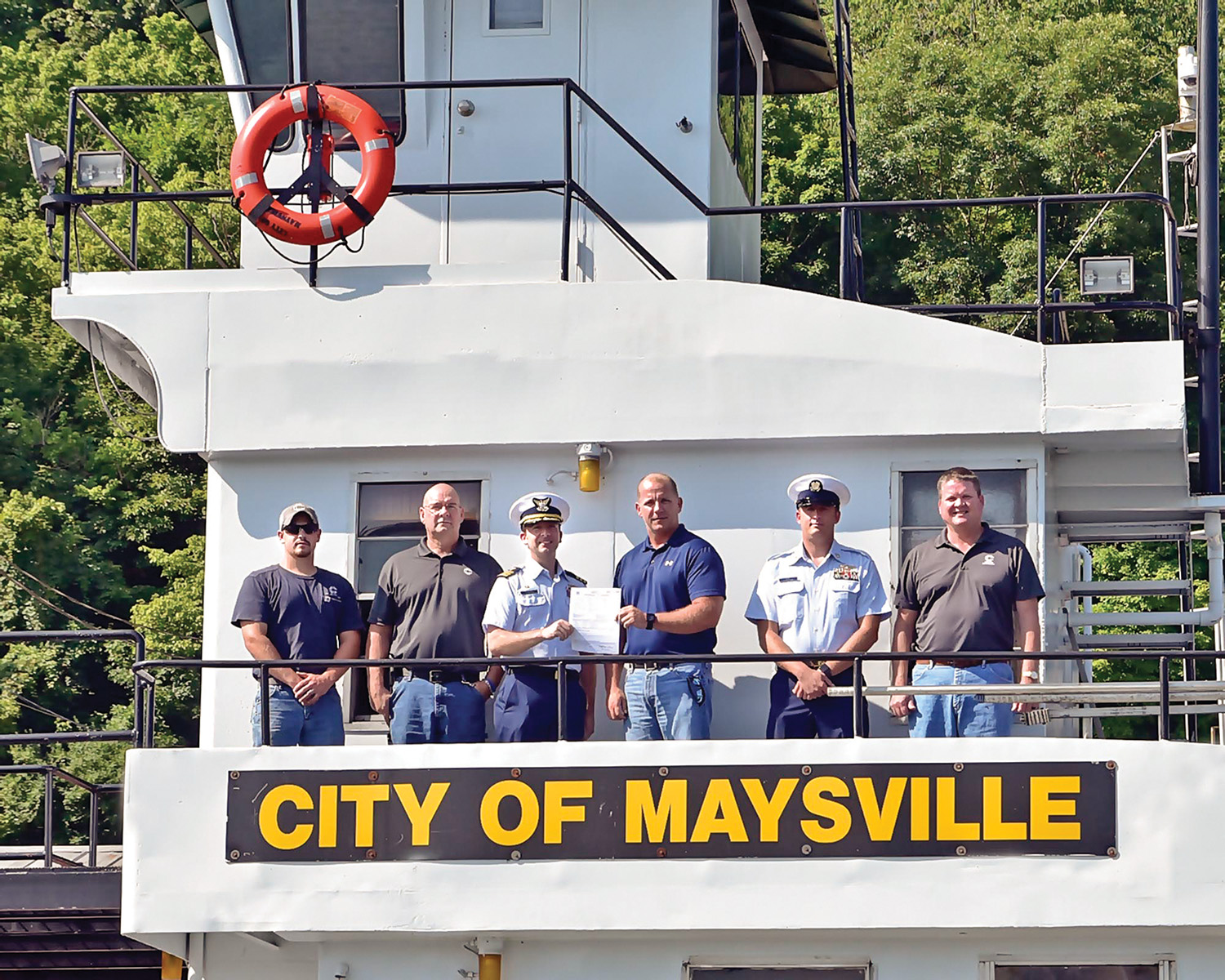 On June 27, Crounse Corporation’s mv. Eva Kelley was the first vessel in its fleet to receive its Certificate of Inspection (COI). Dylan Hesley, manager of safety, along with the shoreside team and the crew of the vessel, worked with the Coast Guard’s Marine Safety Unit Paducah in submitting the required information for the COI application and getting the vessel ready for the inspection. This was the first COI issued by Marine Safety Unit Paducah.

“It is definitely a process to gather all of the required information needed for objective evidence, but with constant communication between the vessel rep and the Coast Guard, it can be relatively painless,” said Joseph Brown, civilian marine inspector. He went on to encourage companies to begin conversations with their local Coast Guard marine inspectors and submit their vessel particulars as soon as possible.

According to the Towing Vessel Inspection Bureau (TVIB), submitting these details up front allows the local unit to build the vessel profile in the Coast Guard’s Marine Information for Safety and Law Enforcement (MISLE) system and move on to the step of reviewing objective evidence. Brown noted that reviewing the objective evidence takes considerable time on the company’s part.

TVIB said it recommends contacting each unit where a company will apply for a COI to determine its specific requirements, as the Coast Guard has not adopted a single standard.

On July 13, the mv. City of Maysville was the second Crounse vessel to receive a COI. Mike Kidd, port captain, worked with the vessel’s crew and MSU Huntington to obtain the vessel’s COI.

“The Coast Guard appreciates the dedication, diligence and willingness of the Crounse Corporation to put the effort in to achieve compliance with Subchapter M and supply the necessary information in order to generate the first COI for the City of Maysville in the Port of Huntington/Tri-State zone,” said Coast Guard Cmdr. Paul Mangini. “We look forward to continued cooperation as we both work together to bring the rest of their towing vessel fleet into inspected status.” This was the first COI issued by MSU Huntington.

The term “uninspected towing vessel” was a misnomer placed on over 6,000 towing vessels as a way to classify them, TVIB said. Uninspected towing vessels, or UTVs, have been the most inspected uninspected vessels out there.  This term created a most-unearned negative connotation for the majority of the vessels as many in the inland towing industry have been participating in a third-party audited safety management system under the American Waterways Operators’ Responsible Carrier Program since the early 1990s. TVIB said Crounse Corporation is one of those companies.

“What you’re seeing here is true partnership between industry and the U.S. Coast Guard working together, to achieve a successful implementation and launch of Subchapter M,” said Tava Foret, executive vice president-operations for TVIB. “Crounse Corporation is clearly on the leading end of Subchapter M compliance.”

TVIB worked with Robbie Englert, senior vice president of operations, along with a strong shoreside team for Crounse to be the first company to be issued a Towing Safety Management System certificate by TVIB.

The Crounse team is among TVIB’s earliest supporters, according to Foret. “TVIB’s model is one that is shaped by the desire to raise the level of knowledge, understanding and overall compliance with the programs for which we provide services,” she added. “TVIB believes that the quality of our auditors and surveyors are the backbone of our organization.”

(Top photo: The mv. City of Maysville was the second Crounse vessel to receive a COI. (photo courtesy of the Towing Vessel Inspection Bureau)