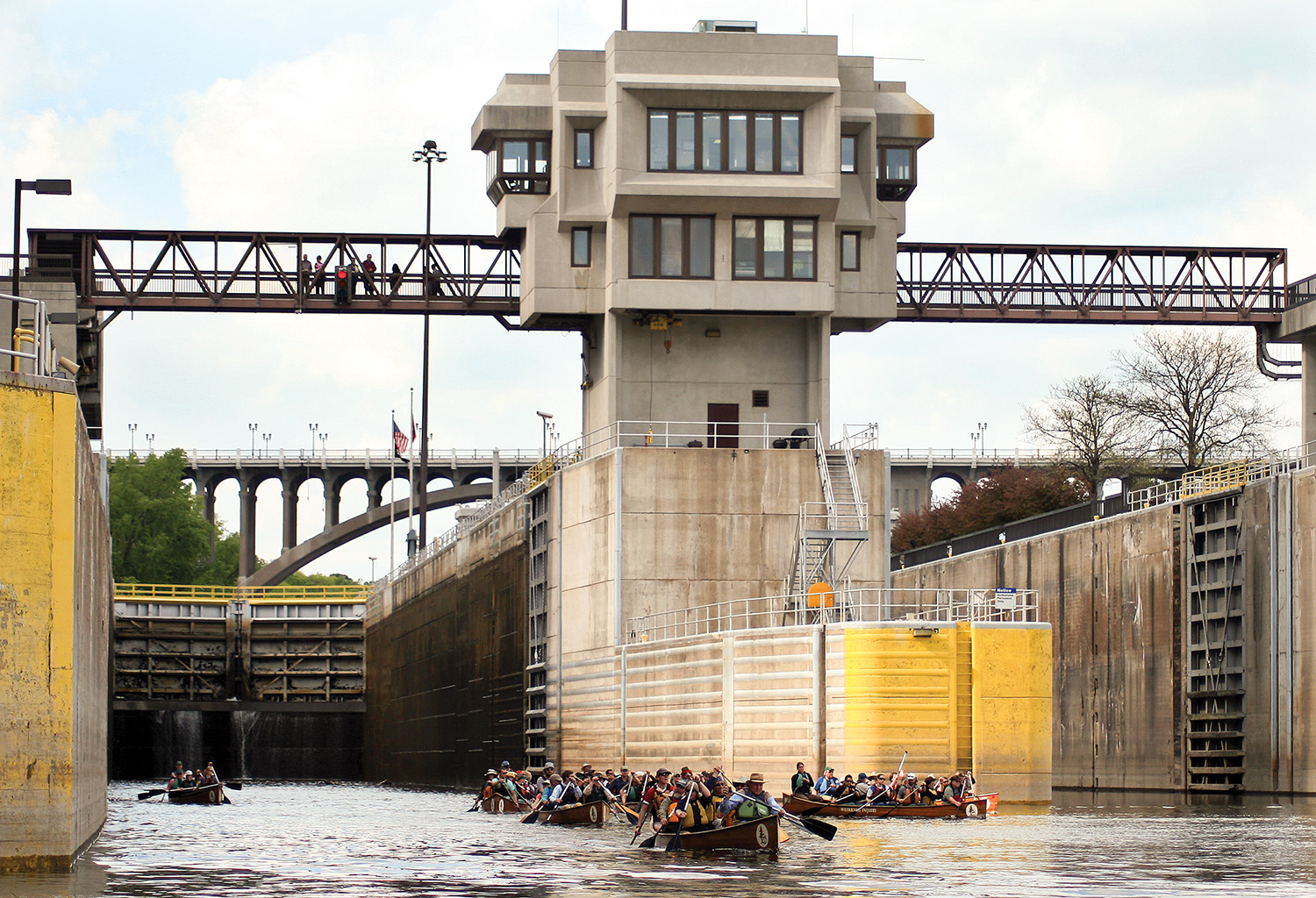 More than 200 residents, representatives of the commercial navigation and recreational boating industries and other stakeholders attended the meetings. Participants provided official comments on whether the Corps should continue to operate the sites as-is or if they should be deauthorized by Congress and sold, leading to the disposal of the properties through the General Services Administration.

Nan Bischoff, a St. Paul District project manager, said that while both public meetings were well attended, a lot of the comments focused on the narrow scope of the study. “We heard a lot of questions asking the Corps why we weren’t studying the removal of the locks and dams,” she said. “It’s not in the Corps’ guidelines to do that when undergoing disposition studies. We can look at doing nothing with the structures and maintaining them as-is or we can ask Congress to deauthorize the projects and transfer ownership.”

During the presentation, the Corps said the costs for maintaining service at the three sites is approximately $1.5 million per year. To dredge the channel above Lock 1, the cost is roughly $300,000 per year. There is also occasional major maintenance costs to replace or rehabilitate steel and concrete structures at the sites.

Greg Genz, vice president of Friends of Pool 2 and owner of Kaposia Marine Services, a marine consulting firm serving river-related businesses and local communities, told the Leader-Telegram that the locks and dams would be offered to other federal agencies, but he doesn’t expect they would want them.

Genz, who has a 40-year history of involvement with all aspects of Pool 2—between Lock and Dam 1 and 2—and is currently acting as communications manager on a $70 million rehabilitation project of Lock and Dam 3, said that local and state units of government could bid on the dams and the new owner would either keep the locks and dams open or close them.

“I don’t know if I have ever seen dam removal like this in a major metro area, especially dams with that much vertical drop,” he told the Leader-Telegram.

Genz has been a fixture in the local shipping, transportation and river-related construction industries. He is a past member of the Riverfront Planning Committee for the city of South St. Paul, Minn., and is the former vice president and executive committee member of the Upper Mississippi Waterway Association (UMWA).

Russell Eichman, executive director of UMWA, who attended the Corps’ private meeting on July 18, said that UMWA members will submit a position paper with comments on the study to the Corps’ Center of Expertise prior to the end of their scoping period.

“We need to have a channel,” he said. “We’re in the process of putting our heads together to create a formal statement. We want to know what would happen with all the silt backed up behind the structures and will the Corps remain committed to a viable channel to St. Paul Harbor and the navigable portion of the Minnesota River, which provide price-competitive up- and down-bound transportation for millions of tons of agricultural and other commodities?”

Eichman said that more than 40 million tons of freight are shipped out of the St. Paul area annually.

Like Eichman, the Minnesota Department of Transportation (MnDOT) also has concerns about dredging the channel should the locks become deauthorized.

Patrick Phenow, manager of MnDOT’s Ports and Waterways program, said that deauthorization and disposal of the three locks would impact the extent of the Corps-authorized 9-foot channel. “Barge traffic would likely be adversely impacted as this would have an impact on downstream dredging operations,” he said. “The Corps’ current study scope does not include any consideration of dam removal. If that were to change, MnDOT has concerns about how that would further impact downstream dredging.”

From now until August 20, the Corps will receive public comments on the study and assess and document interest by potential future owners of the lock and dam sites. After that date, the Corps will gather information and prepare a draft report and do an environmental assessment through March 2019. The draft report and environmental assessment will be available for public review by June or July 2019, before the final report is made available in December.

At both meetings, the Corps educated the audience on what is not covered by the study scope, which included Asian carp, dam removal, proposals for future uses of the sites and pending hydropower licenses. Should the scope of the study change, the Corps said additional public meetings will be required.

Questions on the study can be directed to Nan Bischoff at 651-290-5426 or Nanette.m.bischoff@usace.army.mil.

Additional information can be viewed at: www.mvp.usace.army.mil/MplsLocksDisposition/.