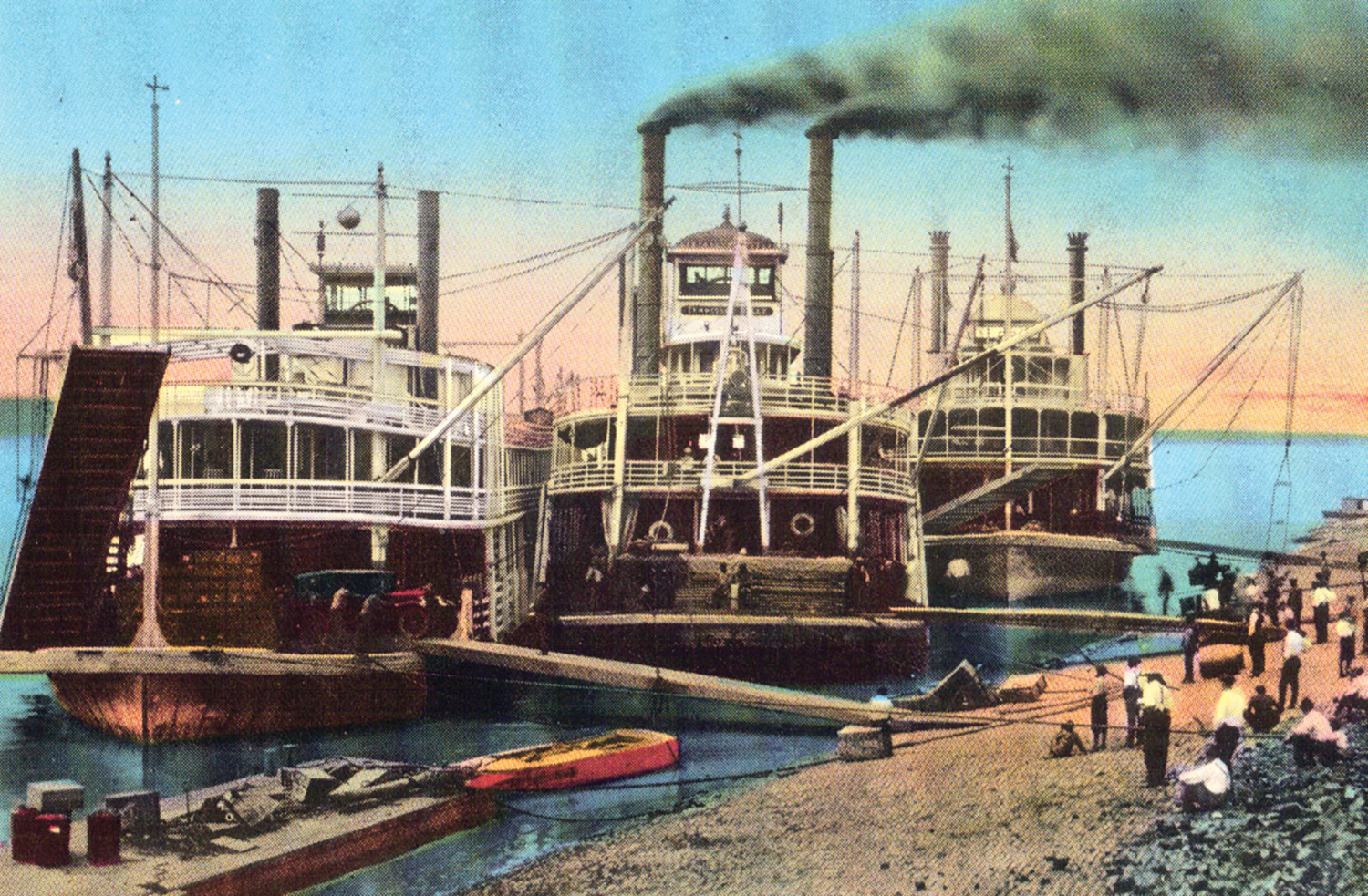 The Twilight Of Packet Boating

By the 1930s the last remaining riverboats to carry freight and passengers were beginning to fade from the scene. This week, the Old Boat Column presents a colorized vintage view of a trio of sternwheelers that were among the last of the packets to ply the rivers. Moored at the Cape Girardeau, Mo., wharf from the left are the Bald Eagle, Tennessee Belle and Cape Girardeau.

The Bald Eagle was built in 1898 at Madison, Ind., on a wooden hull that measured 206.5 feet in length by 34.2 feet in width. Two boilers supplied steam to engines having 15-inch cylinders with a 5-foot stroke. Much equipment was recycled from the D.H. Pike.

The boat was owned by the Eagle Packet Company of St. Louis, and operated in the St. Louis–Illinois River trade. By 1929, the steamer ran in the St. Louis–Cape Girardeau–Commerce trade. After retirement, the Bald Eagle was used as a quarterboat on the Missouri River, where it eventually broke up and sank in 1934.

This handsome steamboat was the result of a major rebuilding—in 1923 at Paducah—of the packet Kentucky, which had been built in 1904 at Jeffersonville, Ind. Constructed on a wooden hull measuring 176 feet long by 33 feet wide, the boat was owned by the St. Louis & Tennessee River Packet Company.

At the time of the rebuilding, the roof bell was removed and presented by Capt. King Hale to the First Christian Church of Paducah.

The sternwheeler was sold in 1927 to Capt. Dick Dicharry, who operated it on the Lower Mississippi River. The vessel sank on February 3, 1936, between Lake Providence and Vicksburg, but was raised and restored to service.

The riverboat was featured (as the sole surviving steam packet on the Lower Mississippi) in Thomas Hart Benton’s book, An Artist in America, published in 1937.

With Capt. Charles G. Barker in command, the Tennessee Belle burned at Natchez Island (3 miles below the city) in November of 1942.

The third steamboat to carry the name Cape Girardeau, this vessel was built at Jeffersonville by the Howard Shipyard in 1923; it was the last packet boat ever built by the Howard yards.

Constructed on a steel hull measuring 210 feet in length by 38 feet in width, the engines (recycled from the packet Ferd Herold) had 18-inch cylinders with an 8-foot stroke; three boilers supplied the steam. The sternwheel was 22 feet in diameter with 28-foot bucket planks.

The boat was designed by Tom Dunbar for the Eagle Packet Company. The new boat went from Louisville to St. Louis on its delivery trip in November of 1923. The formal christening ceremony took place at the namesake city on April 24, 1924, with Christina Rowling doing the honor.

The riverboat made St. Louis–New Orleans round trips to the Mardi Gras from 1925 through 1930. In the fall of 1934, the vessel was chartered by Mississippi Valley Barge Line to move a tow from St. Louis to Cairo.

In early 1935, the Cape Girardeau was sold to Greene Line Steamers of Cincinnati, Ohio, and renamed Gordon C. Greene.