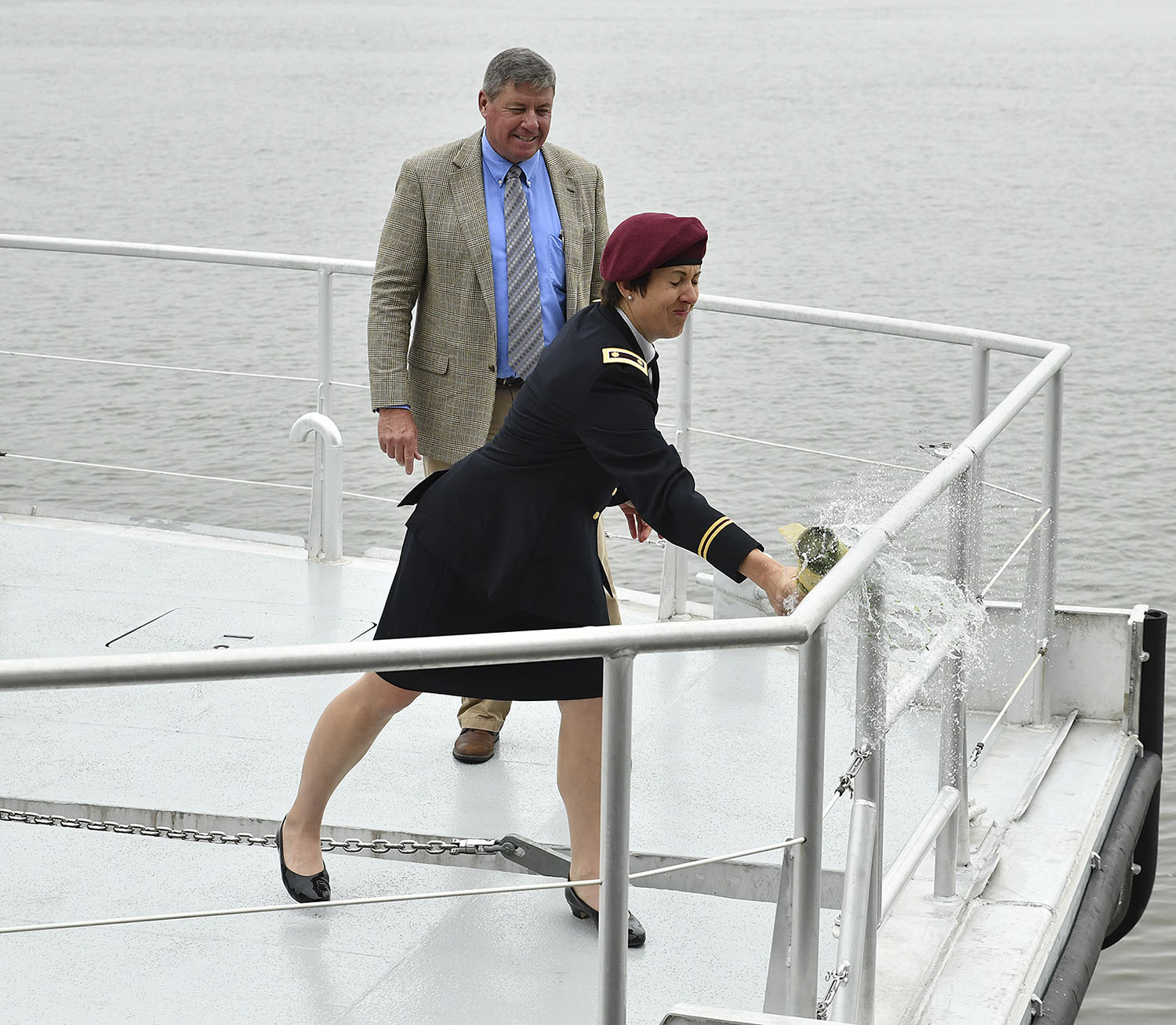 The Mobile Engineer District christened the survey vessel Damrell in a November 8 ceremony at the Cooper Riverside Park Amphitheater in Mobile, Ala.

Brooke Henderson, who is a major in the U.S. Army Reserve and the great-great granddaughter of Damrell, was the one chosen to christen the vessel. Henderson said it was a great honor to her grandfather’s vision.

“They called the Mobile Harbor ‘Damrell’s Ditch’ and laughed at him,” Henderson said of the current Mobile Harbor. “He was ahead of his time. I’m so excited and thrilled to be a part of this ceremony. It is a huge honor and a nice tribute to a visionary.”

Damrell was the first, and longest-serving, Mobile District engineer, serving from 1873–1895. Under Damrell’s command, the district developed Mobile Harbor and the current Mobile Ship Channel. He was also responsible for the construction of the 17 locks and dams along the Black Warrior-Tombigbee Waterway, extending commercial navigation to the Tuscaloosa and Birmingham areas.

Damrell was a strong advocate on the Engineering Board, approving navigation improvements in Mobile that lead to the current alignment of the Mobile Ship Channel.

Joly said it was fitting that they recognized a predecessor like Damrell, who did a lot to benefit not only the district, but the city of Mobile and the state of Alabama.

“It’s an honor to recognize someone who did so much to make Mobile and the state of Alabama competitive economically,” Joly said.

Fuller said the ceremony was a fitting tribute to Damrell’s legacy.

“Col. Damrell left a great legacy for navigation in the Gulf Coast region,” Fuller said. “He made major improvements to the Port of Mobile, and when you look at it today, you see how important he was to this city and to this region.”

Joly said the vessel will be an added strength to the district.

“We are excited about the new capabilities this vessel brings to the district,” Joly said. “It will help us provide better support in Mobile and the Gulf Coast.”

Neaf Henderson, another descendant of Damrell, said the ceremony was a fitting tribute to his forefather and his family.

“I think it was great idea to invite the family and the extended family, it was kind of like a family reunion and it was a good memorial for Col. Damrell,” Neaf Henderson said.