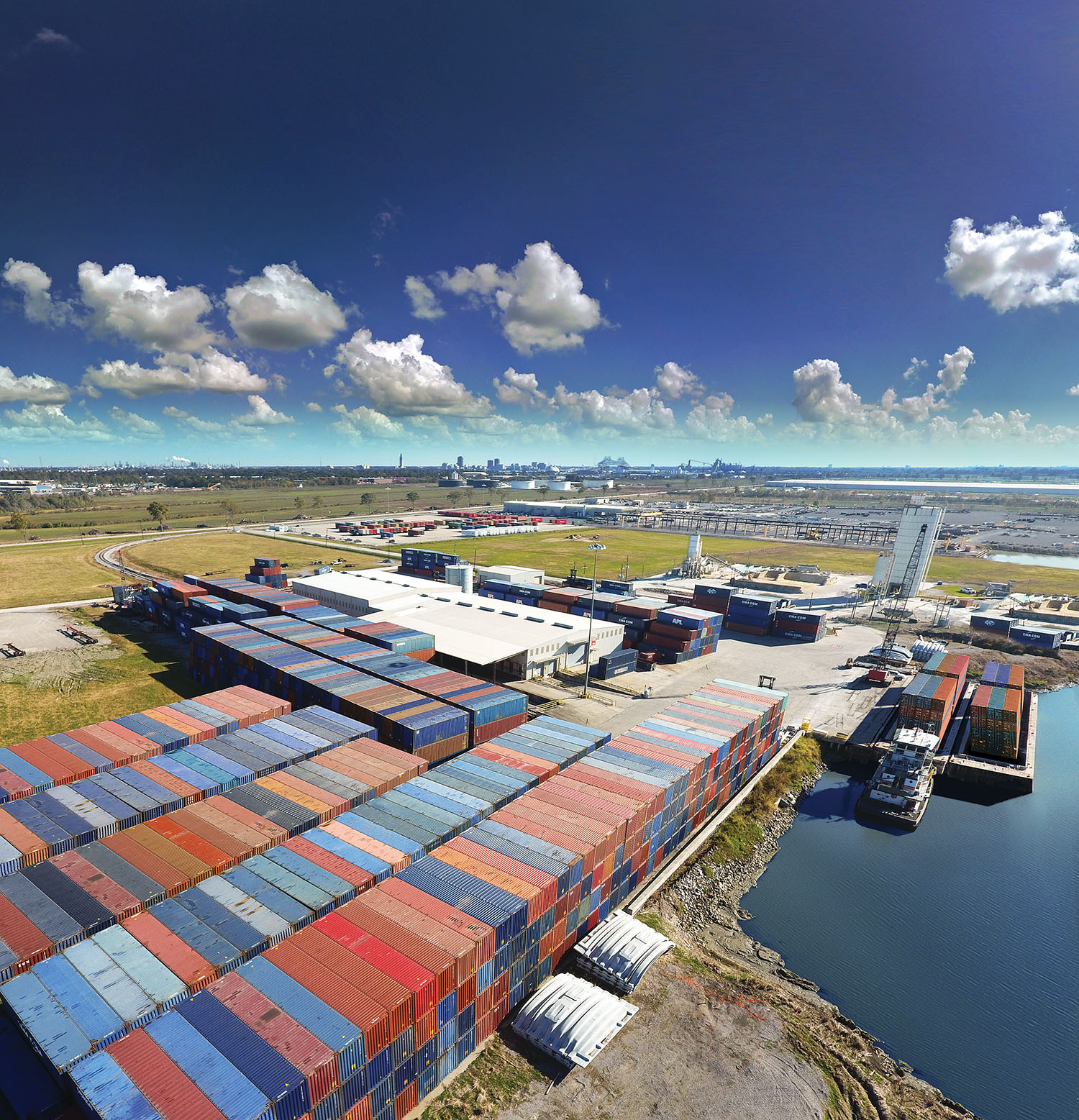 The Port of Greater Baton Rouge, with a jurisdiction that stretches on both the east and west banks of the Mississippi River from Mile 168.5 to Mile 253 AHP, is the northernmost deepwater port on the Mississippi. It joins the ports of Plaquemines, St. Bernard, New Orleans and South Louisiana as one of the state’s five Mississippi River ports, comprising the largest port complex in the world.

The Port of Greater Baton Rouge is also linked to the Gulf Intracoastal Waterway (GIWW) via the Port Allen Lock and the Port Allen Route, which joins the GIWW near Morgan City, La. Its location on the Mississippi River means Baton Rouge is a hub for everything from wood pellets and petrochemical manufacturing to oil companies, agricultural products, aggregates and more.

One of the ways the port’s incredible connectivity is being maximized is through a partnership between the Port of Greater Baton Rouge, the Port of New Orleans and SEACOR AMH, which is moving a growing number of containers from Baton Rouge to New Orleans by barge for export.

Polyvinyl chloride (PVC) resin pellets are a major source of container exports through the Port of New Orleans, and the majority of those containers originate from Baton Rouge-area chemical manufacturers, including Shintech, Dow and Exxon. In 2016, the ports of Greater Baton Rouge and New Orleans and SEACOR initiated a container-on-barge shuttle service, which moves containers packed with resin pellets on the river rather than by road. The shuttle service is recognized as part of the U.S. Maritime Administration’s “America’s Marine Highway” program.

“Our container-on-barge service is continuing to grow,” Port of Greater Baton Rouge Executive Director Jay Hardman said in a recent report on the service. “We are stretched thin right now and excited about acquiring more efficient equipment and the additional infrastructure. Every one of our containers that ultimately goes down to New Orleans for export is one less 18-wheel truck on our roads and bridges.”

To have the available containers for the service, SEACOR repositions empty containers from Memphis, Tenn., to the port’s container yard located on the Port Allen Canal. Richard Teubner, vice president of SEACOR AMH, part of Seacor Holdings Inc.’s Inland River Services group, said SEACOR keeps on average about 1,000 empty containers staged at the facility. Petrochemical manufacturers send trucks to the yard to pick up empty containers and take them to the chemical plants, where they are loaded with the resin pellets. When the trucks return to the container yard, the loaded containers are typically loaded directly from the truck to an open hopper barge moored in the slip. From there, loaded barges are delivered to New Orleans, where they’re exported on container ships.

“We use our company tows to move the empties from Memphis,” Teubner said. “From Port Allen to New Orleans is a dedicated boat.”

The Port of New Orleans is anticipating a surge in resin-packed container exports through 2020, which means demand for the container-on-barge service is already on the rise. To meet that demand, SEACOR AMH began a second weekly shuttle in February.

“We’ve almost doubled this last year over the year before,” Teubner said. “We’re averaging 250 to 260 a week over the last six months.”

The port also anticipates expanding its container storage space in the near future thanks to an anticipated grant from the state. Louisiana’s Department of Transportation and Development announced during fiscal year 2017–2018 the Port of Greater Baton Rouge would be awarded just over $3.4 million to expand its staging area to meet increased demands. The grant is part of the state’s recurring Port Construction and Development Priority Program, better known as the Port Priority Program.

And while resins continue to be the commodity that drives the container-on-barge shuttle service, Hardman and Teubner both said they’re seeking ways to expand it to more cargoes and additional terminals.

“We’re all out there looking for greater acceptance throughout this region,” Hardman said. “Once you get moving around, other people will start looking for ways to get involved.”

Hardman said the team is exploring the possibility of loading containers with agricultural products, dimensional lumber or even logs for export. Teubner said SEACOR is already moving a few containers for import, loaded with tires or dry goods, for example, up to Memphis. That adds value to the system.

“It also buys down the cost a bit,” Teubner said.

There are also possibilities for imported goods bound for Baton Rouge, Teubner said.

“There are a lot of cargo movements we could put on barges that are coming to Baton Rouge now by truck,” he said.

Beyond that, Teubner said he could see SEACOR moving containers by barge in and out of St. Louis, Mo., where SEACOR already operates terminals on the Mississippi River.

Beyond the container-on-barge service, the Port of Baton Rouge also looks to capitalize on the recently-approved deepening of the Mississippi River, which will eventually extend a 50-foot channel up to the Highway 190 bridge near river Mile 234. The port currently offers three berths for deep-draft vessels, with a fourth berth used for barges.

“We’ve got on the drawing board increasing our northern berth, which we’ve been using for barges, into a fourth liquid berth,” Hardman said. “It’s not a full build out, but a reconfiguration.”

With the Mississippi River deepening and the ever-growing petrochemical industry in Baton Rouge, along with the other cargoes moving in and out of the area, the possibilities for SEACOR’s container-on-barge service, and the Port of Greater Baton Rouge in general, are as far-reaching as the waterways they’re connected to.

“Just follow the river and see where it goes,” Teubner said.