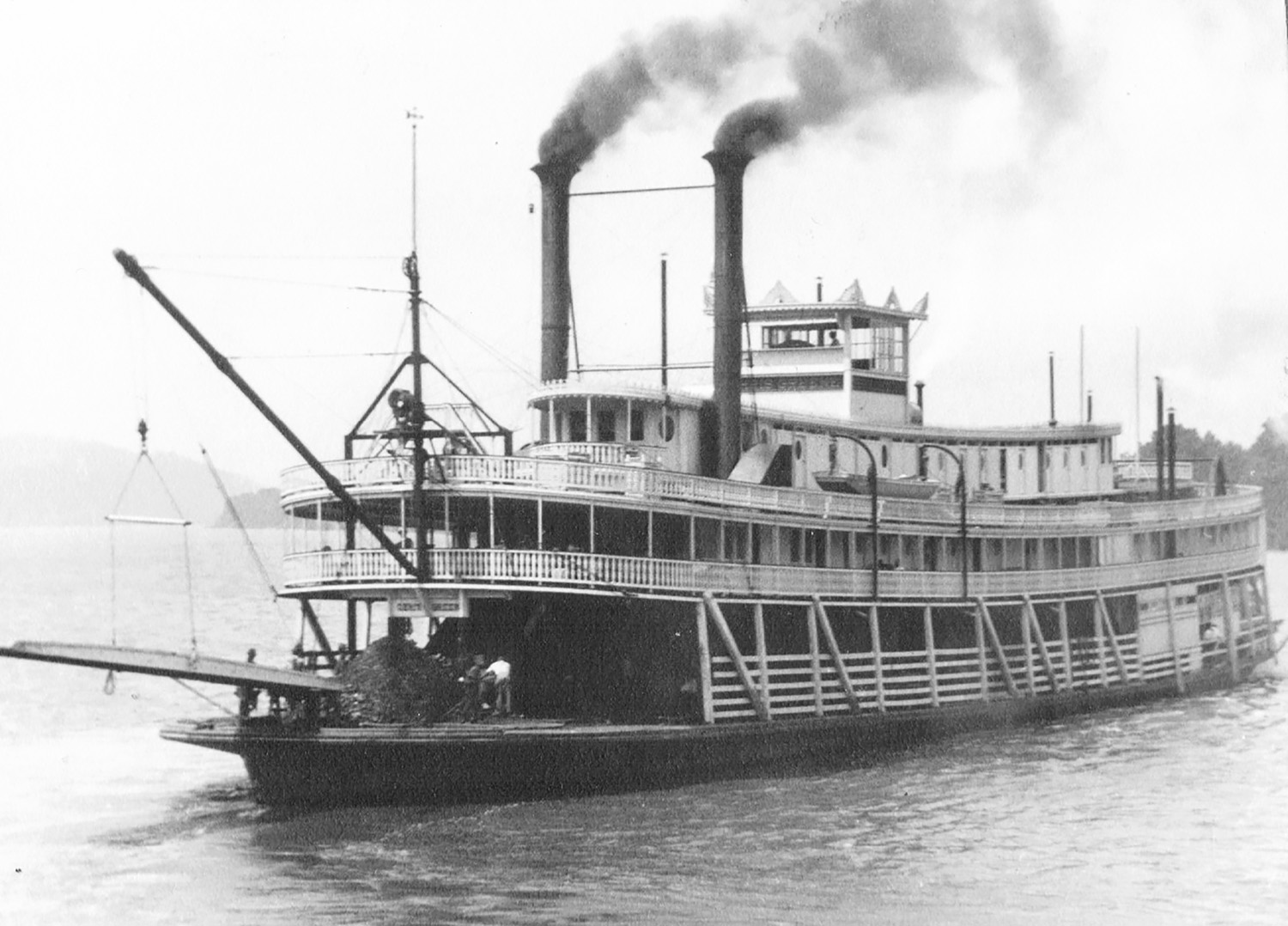 The cabin of the Chris Greene decorated for Christmas. (Keith Norrington collection)

River historian and WJ correspondent Virginia Bennett (1924–2013) loved to reminisce about her favorite steamboat, the Chris Greene (second of the name) at Christmas time.

Bennett vividly recalled that La Rie Greene, wife of Capt. Chris Greene, enthusiastically supervised the holiday decorating of the second-deck cabin with brightly colored bells and paper chains that were strung across the white gingerbread-trimmed woodwork and around the mirrored stateroom doors. The Christmas tree, laden with strings of popcorn and other decorations, proudly stood in the center of the long room, opposite the coal stove. Bennett remembered, as a toddler, her delight at being allowed to place ornaments on the lower branches.

On Christmas Eve, the deck crew was invited upstairs to receive a bag of hard candy, cookies and a bottle of whiskey. Vivid in her memory was the frigid feel of the winter river, and the frightening sounds made by the paddlewheel picking up large chunks of ice and slamming them against the stern bulkhead.

Following the horrific fire at Cincinnati on November 4, 1922, that destroyed the first steamer Chris Greene and several other vessels, Greene Line Steamers did not again have a boat of that name until 1925. The plans for the new sternwheeler were drafted by Capt. Jesse P. Hughes, longtime pilot for the company, who also supervised the boat’s construction.

The vessel was built by the Charles Ward Engineering Works at Charleston, W.Va., and construction was completed at the Gardner Docks in Point Pleasant, W.Va. The steel hull measured 189.2 feet in length by 42 feet in width, with a depth of 6.2 feet. Four boilers supplied steam to the engines, which had cylinders of 16 inches with a 6-foot stroke and which were recycled from the steamer Tacoma, also operated by the Greene Line.

The handsome steamboat originally operated in the Cincinnati-Pomeroy-Charleston trade, under the command of Capt. Chris B. Greene; later the master was Capt. Volney E. “Stogie” White. By 1934 the vessel was running in the Cincinnati-Louisville trade; the staterooms were removed in 1936 to provide space for transporting automobiles.

The “Chrissy,” as the boat was affectionately known, had the dubious distinction of breaking a total of seven paddlewheel shafts, and of “running through itself” at least a dozen times!

The whistle originally served on the big excursion steamer Homer Smith and today is in the collection of the Ohio River Museum, Marietta, Ohio.

Retired in 1947, the Chris Greene was purchased in 1950 for $8,500 by George Harrison Sr., proprietor of the Dayton Boat Harbor (at Dayton, Ky.), who converted it into a yacht club. The partially dismantled boat burned on July 21, 1968. The roof bell was salvaged and today rings over the river aboard the sternwheeler Sewickley, owned by Capt. Bob Harrison.

For four decades, the hull of the Chris Greene has been beached at Melbourne, Ky., on property formerly owned by the Harrison family. The welded steel letters of the boat’s name are still visible at the bow and many steamboat enthusiasts, including this writer, have made pilgrimages to the site to visit the remains of the riverboat, as it continues to keep silent sentinel over the Ohio.