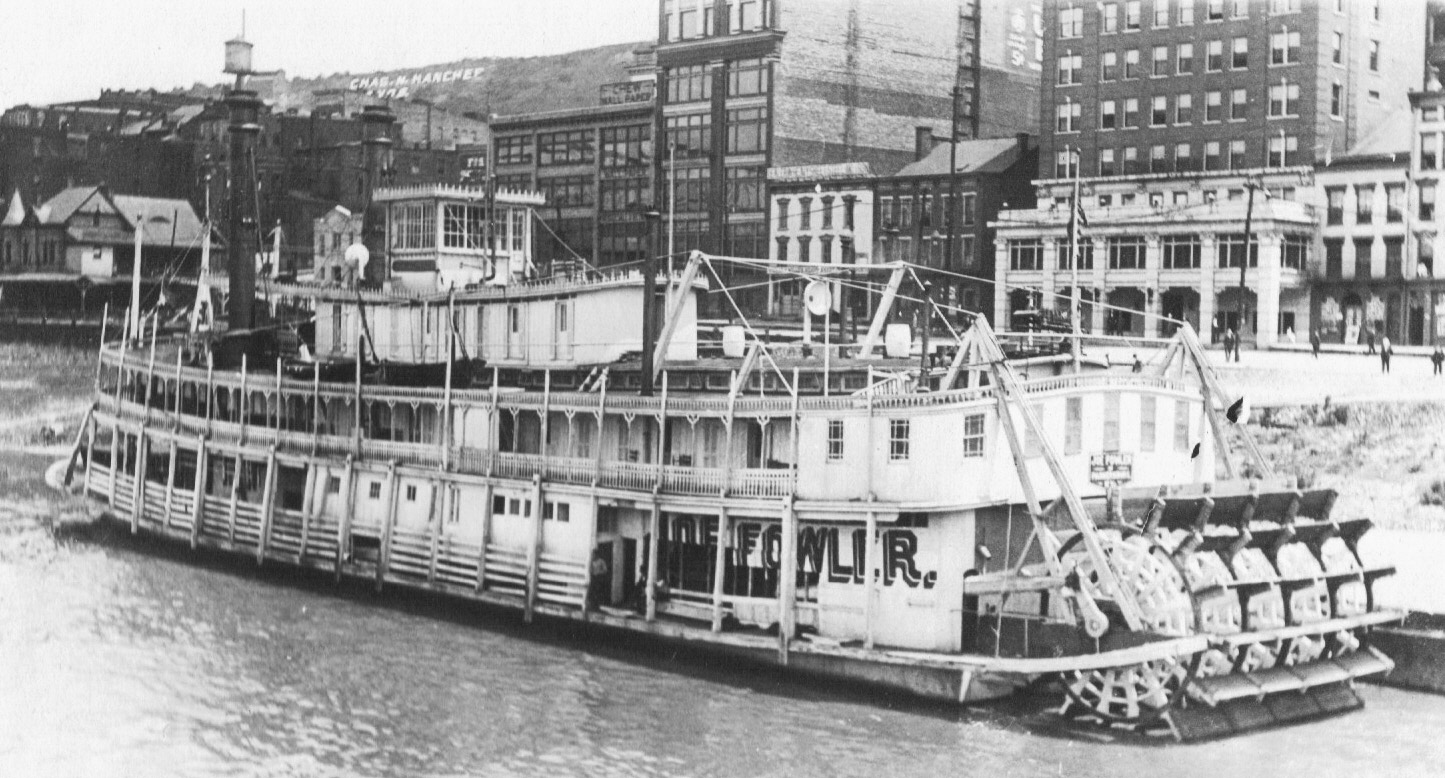 The sternwheeler Joe Fowler was built at Jeffersonville, Ind., by the Howard Shipyard in 1888 for the Fowler family. Built at a contract cost of $20,800, it was designed to run in the Evansville-Paducah trade with the John S. Hopkins under the command of Capt. James Damron.

Constructed on a wooden hull that measured 182 feet in length by 31.6 feet in width, the vessel was powered by engines with 16-inch cylinders and a 7-foot stroke. Three boilers supplied the steam. The original whistle used on the boat was transferred to the sternwheel packet Ruth; the whistle from the Courier was obtained from the Gamble Family and used.

By 1895, it was reported that the steamboat had, in the period of seven years, completed a total of 327,000 miles as a United States Mail steamer and had carried some 132,400 passengers with no loss of life.

Capt. Ben Pope purchased the worn and weary vessel in the spring of 1912 and took it to the Pope Dock Company at Parkersburg, W.Va., for a complete rebuilding, which included four new boilers that were allowed 259 pounds of steam; hereafter, the steamboat was nicknamed “Ben Pope’s Racehorse.”

The Fowler was initially placed in the excursion trade during 1913, running out of Wheeling. A cruise to the Mardi Gras was run in early 1914; later that year, it was decided to offer a novel excursion in June, a trip from Pittsburgh to St. Paul and return. It appeared for a time that, due to insufficient reservations, the trip would be canceled. At the eleventh hour, a reservation for 11 tickets was received from Judge William Way, of Sewickley, Pa. Among the Way family members making the trip was a lad of 13 named Frederick, who would ultimately make quite a name for himself in the world of riverboating. The cruise, composed of some 3,040 miles, returned to Louisville instead of Pittsburgh due to low-water conditions.

The Fowler ran excursions at Louisville during 1914 with Capt. Billy Lepper as master. By 1915, the speedy steamer was running a weekly round trip between Pittsburgh and Louisville. The boat also served as a towboat in 1917, delivering new barges from Ambridge, Pa., to the South.

During much of this time, the Fowler had a calliope, played by Gus Fissmer, a resident of Louisville.

Reportedly, the steamboat was never involved in any major accidents, but did break two paddlewheel shafts and had several mishaps (striking the bank, snags, etc.) that required repairs. Five deckhands are recorded as having fallen overboard and drowned between 1893 and 1909.

The Joe Fowler was sold in 1917 to Capt. John Lowrey, of Evansville, Ind; he in turn sold the riverboat to Capt. Jeff Williams (also of Evansville) who converted it into an excursion steamer named Crescent. The steamboat burned to the waterline while laid up for the winter in the Green River on November 17, 1920. Two boilers and the landing stage were salvaged and installed on the packet Betsy Ann. Two other boilers were conveyed to the towboat Scout.

Caption for top photo: The Joe Fowler at a landing. (Keith Norrington collection)