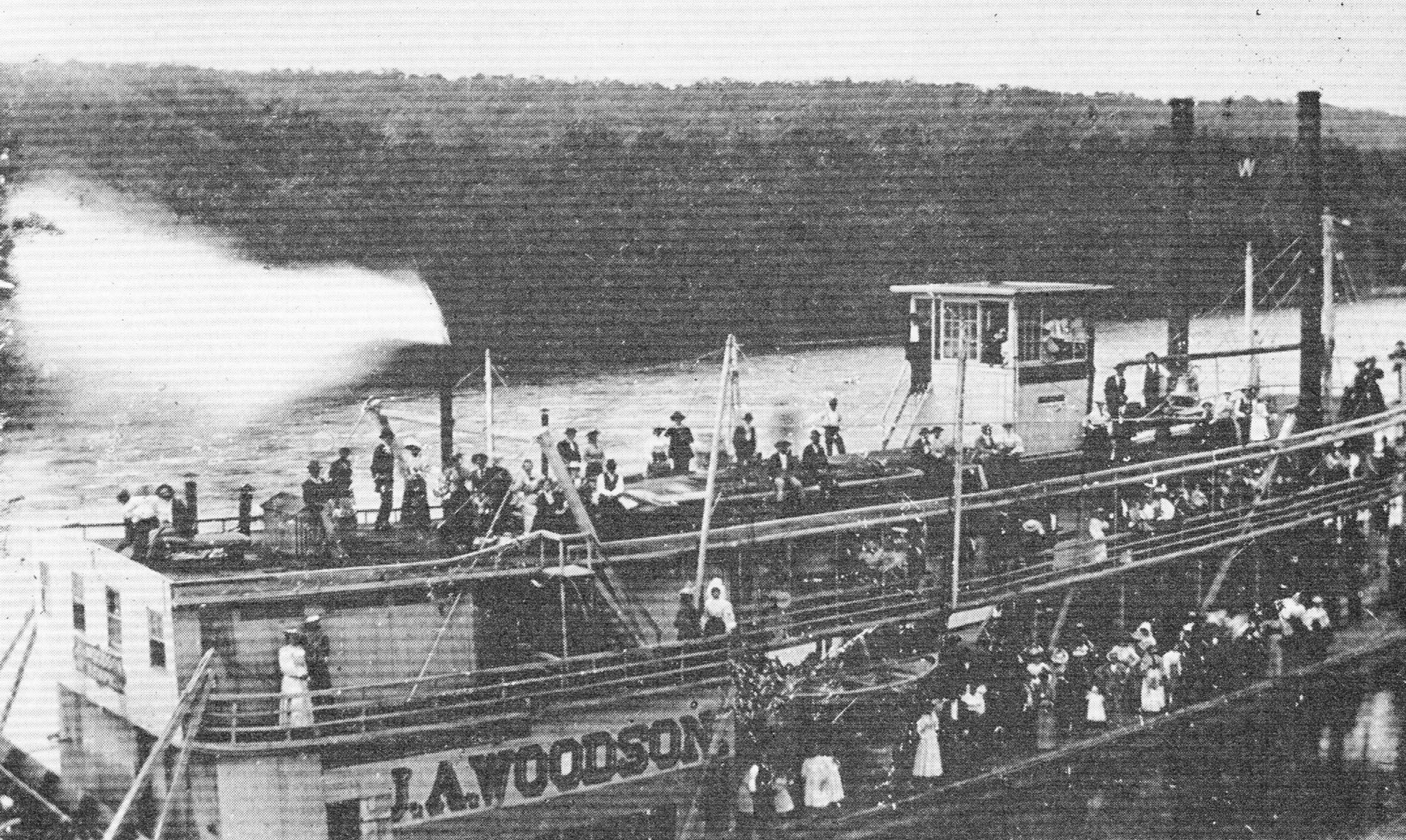 According to the U.S. List of Merchant Vessels, the boat was constructed on a wooden hull measuring 142 feet in length by 30 feet in width, with a depth of 3.5 feet. The sternwheeler ran in the Little Rock–Pine Bluff trade. Two boilers supplied steam to engines having 10-inch cylinders with a 4-foot stroke.

The crew in the early 1880s was composed of Capt. L.P. Drake, master; Capt. James Bowlin and Capt. Rees Pritchard, pilots; Amos Day, purser; Green Johnson, chief engineer; George Ballou, second engineer; George Ivey, mate and Charles Musselman, clerk. The late Capt. Sam G. Smith, a riverman who served for a time as managing editor of The Waterways Journal, recalled in 1947 that the Woodson ran for at least a decade as the tri-weekly packet between Little Rock and Pine Bluff on the Arkansas River. The riverboat ran in competition with railroad rates.

As with all steamboats, there were accidents and problems. On December 2, 1882 the Woodson caught fire and was saved from destruction by what the U.S. Steamboat inspectors at Memphis termed “heroic efforts of its officers.” The damage caused by the conflagration was estimated to cost only $200.

A notation in the log of the Memphis inspection office for October 27, 1884, reads: “The first engineer and second steward of the J.A. Woodson engaged in a fight in which the former was shot and killed and the latter jumped overboard and was drowned.”

On March 12, 1887, Allen Babb, a deckhand on the Woodson, fell overboard and drowned at Fourche Bar on the Arkansas River. Late that year, on December 18, the steamboat struck an underwater obstruction and sank; the vessel was quickly raised and repaired at a cost of $2,500. While on a White River trip, the sternwheeler struck a rock near Perrine Landing in June of 1894 resulting in a sinking; the cost of raising the boat was a mere $500.

This week’s Old Boat Column image is believed to have been taken in the early 1880s on the Upper White River during an excursion to an area known as “Big Bottom” near Batesville. An all-day picnic outing was held each year for the region. The man standing at the top of the pilothouse steps is Capt. Charles Woodbury, the boat’s owner. Looking out the starboard side of the pilothouse (wearing a white shirt, tie and suspenders) is Capt. Ed Warner. Note that many of the ladies on the decks are wearing sun bonnets, which were popular in that era.

In 1897, the Woodson began a journey to St. Louis with Capt. David Silver in command. While above the elevator at Columbus, Ky., the boat was snagged and sank; it was taken to Mound City, Ill., for repairs. Under new ownership by the Iron Mountain Railroad, the steamboat was rebuilt and renamed W.H. Grapevine to honor the superintendent of Missouri-Pacific’s transfer boats. On Christmas day of 1903, the boat broke loose in ice at Cincinnati, hit the C&O Railroad Bridge and sank.

Caption for photo:  The J.A. Woodson with an excursion on the White River in the 1880s. (Keith Norrington collection)