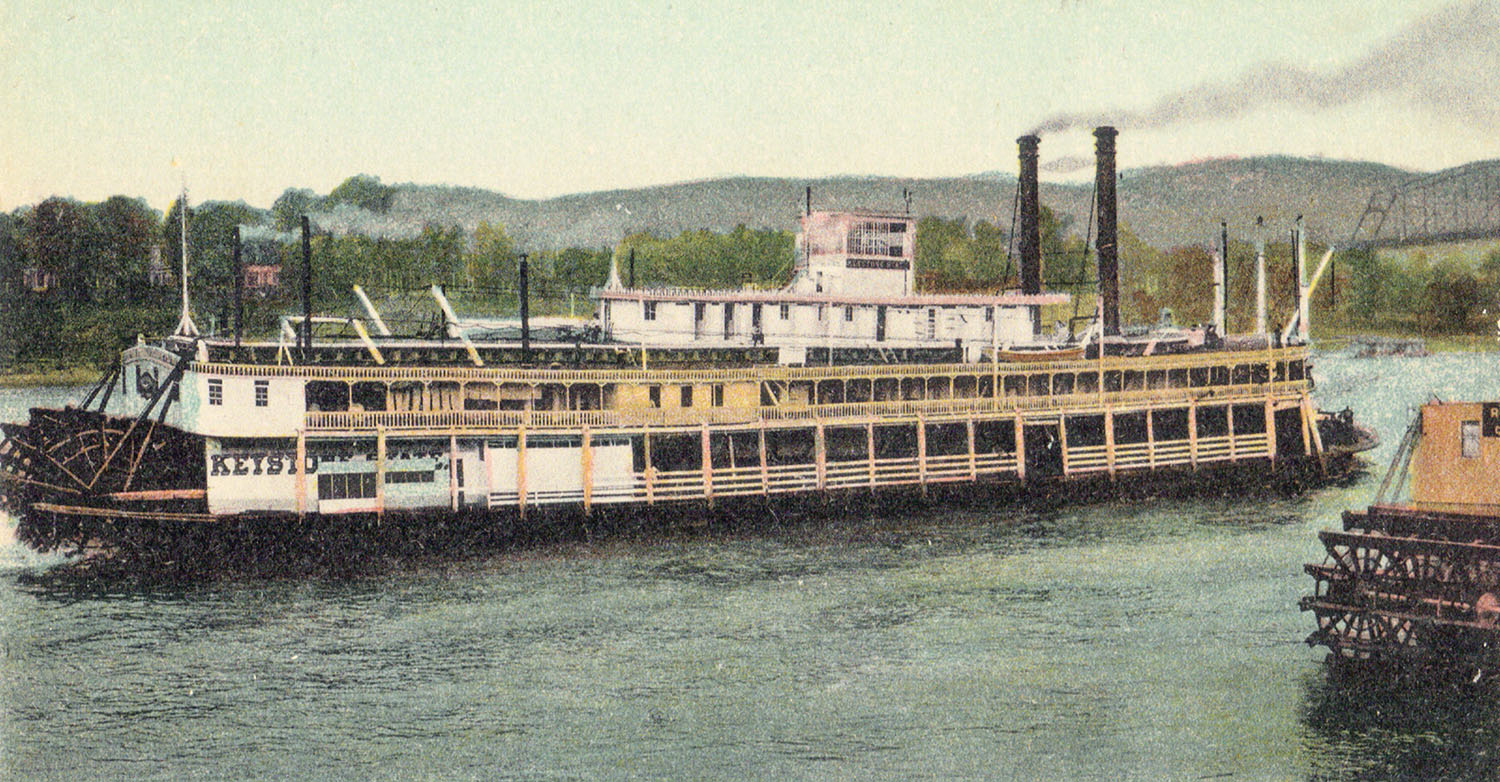 Built for the Pittsburgh & Cincinnati Packet Line, the Keystone State was constructed at Harmar, Ohio in 1890.

The wooden hull of the sternwheeler measured 225 feet in length by 37 feet in width. Three boilers supplied steam to engines having 16-inch cylinders with a 7-foot stroke. Much of the boat’s equipment was recycled from the packet Katie Stockdale, which was dismantled in 1890.

The Keystone State departed on its maiden trip on March 10, 1890. Known as a “huckster” boat, on its usual upbound trips from Cincinnati the steamboat generally had on board 1,000 cases of eggs when it departed from Huntington. From there up, the riverboat turned into a ferryboat, blowing “begging whistles” in every bend with the pilot ever on the alert for a hail from shore, be it the wave of a handkerchief by day or a lantern by night; both meant business. The cargo grew and by the time the boat passed the mouth of the Kanawha River there were 2,000 cases of eggs on deck.

The landings were often a half-mile apart or across the river from each other, as at Graham Station, Racine, Belleville and Reedsville, where the boat would spend a couple of hours. By the time the vessel arrived at Marietta, it was a virtual barnyard, alive with the noise of chickens, cows, pigs, sheep, ducks and turkeys. Eggs were shipped in neatly stacked wooden cases with the shipper’s name stenciled on the side. The total number of eggs upon arrival at Pittsburgh was over 1 million and often more. Thanksgiving time was especially busy for the Keystone State, as live turkeys were shipped by the hundreds and purchased on the wharf.

In the autumn of 1909, the Keystone State was sold to Levi Sparr and taken to Point Pleasant, where it received a new hull. The Kanawha Dock Company was not paid for its work and, after several years of litigation, the vessel was sold to the firm of Dixon & Cohen, wholesale fish merchants of Peoria, Ill. The boat ran in the St. Louis-Peoria trade until 1913. It was again sold, to the Chicago & Gulf Transportation Company, who installed new boilers at Paducah, but failed to pay for them; Dixon & Cohen again took possession. Capt. Milt Harry was master, with Andrew J. Franz (later on the staff of The Waterways Journal) as manager.

During the winter of 1913, the boat was sold to Capt. D. Walter Wisherd and Sam Gregory, who converted it into an excursion steamer and renamed it Majestic.

Two veteran officers of the Pittsburgh & Cincinnati Line were Capt. Charles Knox and his brother, George, who was an engineer. Both served on the Keystone State for a lengthy period. Capt. Fred Way described the men as being small in stature, wearing short beards and looking like two of Santa’s elves, dressed in steamboat uniforms.

Another brother, Morris Knox, headed the Knox Boat Yard across the Muskingum River where the P&C steamers Scotia, Iron Queen and Keystone State were built. The Knox brothers were first cousins of Philander Knox, who served as secretary of state under President Taft.

Caption for photo: A vintage postcard of the Keystone State at the Wheeling wharf. (Keith Norrington collection)