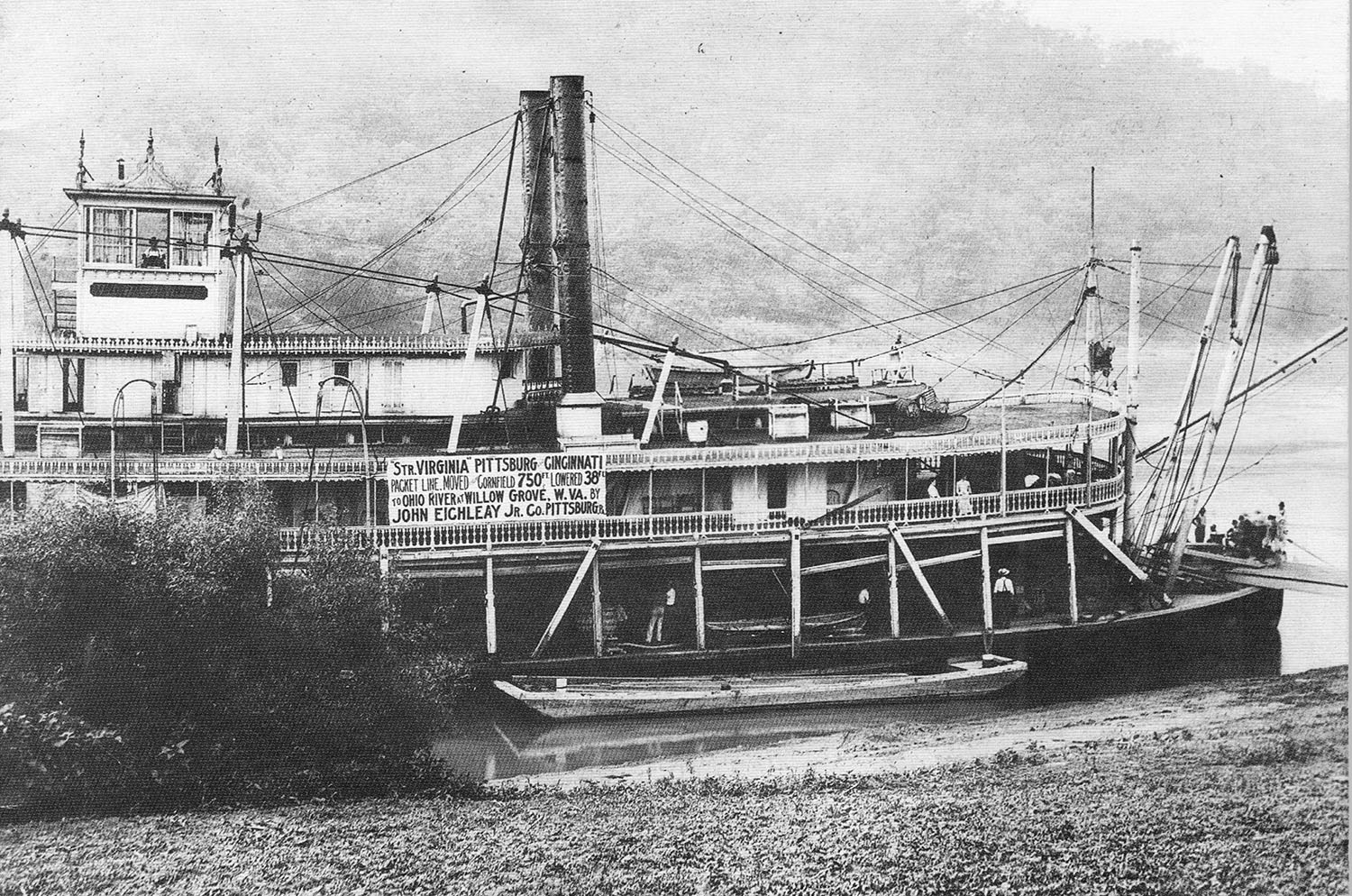 Regarded as one of the most beautiful steamboats afloat, the Virginia made big news 109 years ago when it wandered out of the flooding Ohio River on the night of March 6, 1910.

Shortly after a brief landing had been made below Ravenswood, at Willow Grove, W.Va., to discharge a passenger, the big sternwheeler took an erroneous path through Williamson’s cornfield and grounded. Attempts to free the steamboat were futile and, within a week’s time, the rapidly receding river soon was a half mile away.

The spectacle of the beached riverboat engendered such interest that special cruises were run from neighboring towns to view the stranded vessel. The B&O Railroad also got into the act, running special excursion trains to the site.

The firm of John Eichleay Company, headquartered in Pittsburgh, was contracted to transport the damsel in distress back to the river. With breathtaking, heroic efforts, the boat was moved but, due to the sandy soil, could not be launched. Fortunately, nature intervened with heavy rains, and the Ohio began a rapid rise, which returned the riverboat to its natural habitat on June 20.

Built at Cincinnati in 1895 for the Pittsburgh & Cincinnati Packet Line, the Virginia was constructed by the Cincinnati Marine Railway Company on a wooden hull that measured 235 feet in length by 40 feet in width, with a depth of 7 feet. The machinery was provided by the Zanesville firm of Griffith & Wedge. The compound condensing engines had cylinders of 15 and 33 inches, with a 7-foot stroke. Four boilers supplied the steam.

The boat was noted for being extremely quiet; it was said that passengers had to look out the windows to ascertain if it boat was underway. The Virginia contained 50 staterooms on the cabin (second) deck and 10 additional rooms in the texas.

It was one of the first vessels on the Upper Ohio to utilize a carbon arc searchlight; the lamp was contained in a glass-fronted case with a reflector called a White Squadron light, imported from the Atlantic seaboard.

As with nearly all steamboats, the Virginia was involved in accidents. On March 3, 1904, the steamer struck a submerged pier at Steubenville, Ohio, puncturing the hull. Prompt assistance from the towboats Ironsides and Raymond Horner, as well as the local fire department, prevented a sinking. The original fancy-topped smokestacks were replaced before the spring of 1909, when the sternwheeler sank at the Wellsville, Ohio, landing. While upbound on the Ohio at the construction site of Lock and Dam No. 26, the boat struck an overhead cable, knocking down the stacks and damaging the pilothouse. Temporary repairs were made and the Virginia continued on to Pittsburgh and then back to Point Pleasant for additional repairs.

Early in 1912, the steamboat was renamed Steel City, owned by the Ohio & Mississippi Navigation Company, with John W. Hubbard as president. The first trip under the new owners was advertised as a Mardi Gras cruise from Pittsburgh to New Orleans and return. Unfortunately, unfavorable river conditions delayed the departure date and by the time the boat reached New Orleans, the Carnival festivities were over. By 1916, the boat was under new ownership and was renamed East St. Louis.

Caption for top photo: The Virginia after being refloated from the cornfield in June 1910. (Keith Norrington collection)