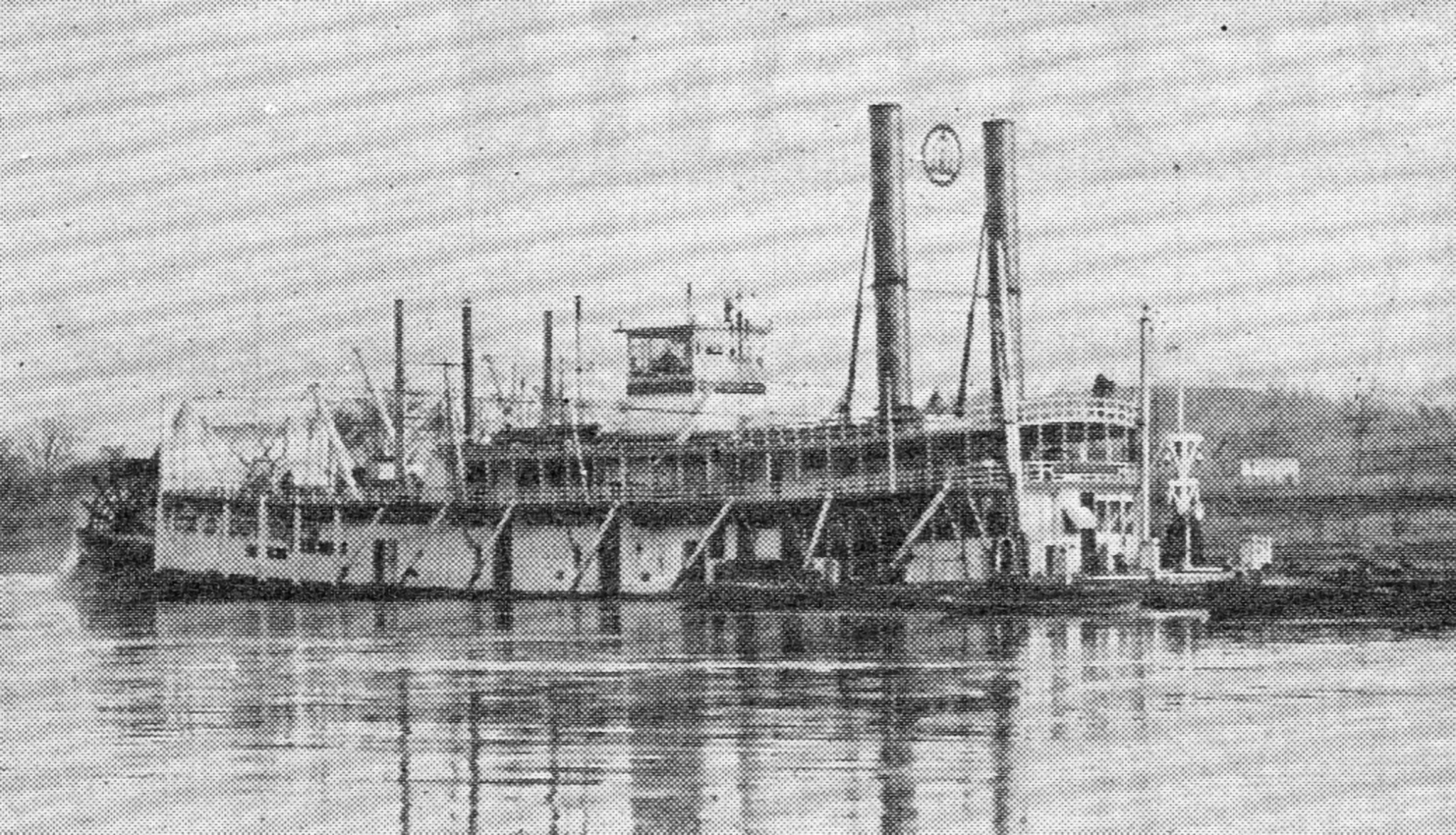 Named for a Cincinnati coal dealer, the Tom Dodsworth was built in 1871 at Pittsburgh by James A. Blackmore.

Capt. George McCallam was the first master of the big sternwheeler, which was constructed on a wooden hull measuring 182 feet in length by 35 feet in width. Six boilers supplied steam for engines having 28-inch cylinders with an 8-foot stroke. The paddlewheel measured 25 feet in diameter and was largely responsible for the vessel’s nickname of “Hoppin’ Tom.”

A record round trip, Pittsburgh to Cincinnati and return, was held by the Dodsworth; it took only four days, 20 hours and 15 minutes to take nine loaded coal boats downstream and two empties back.

By 1892, the steamboat was owned by S.S. Crump & Company, who appointed Capt. Robert Brauff Robison as master, a position he held for many years. Robison owned a greenhouse and was noted for giving away flowers to children on Easter and Decoration Day. Reportedly a methodical man, the captain kept a daily diary, said grace at meals aboard the boat and required his crewmen to wear coats at the dining table. Robison’s sons, Claude and Alonzo, were the pilots of the towboat and a third son was second engineer.

The Tom Dodsworth had the notable honor to lead a river parade at Pittsburgh in July of 1897. A small cannon on the main deck was fired to signal the start of the event, which celebrated the freeing of the locks on the Monongahela River from tolls.

Ownership shifted to the Combine in 1900, as well as a change in masters, with Capt. George Howder and Capt. Al Eckler sharing command.

The boat originally had a recessed cabin that was later extended aft. A deer head and antlers (from the Fred Wilson No. 2) were carried on the pilothouse roof.

Records reveal that the riverboat was involved in two collisions (1899 and 1900) and that two deckhands fell overboard and drowned just above Marietta in 1905.

When a number of the Combine boats were retired in 1915, the Dodsworth was among them. The boat was brought out of retirement in the summer of 1917 (along with the James Moren) to tow coal on the Kanawha River. Returning to Pittsburgh during the late autumn of 1917, the riverboat was tied up at the Point Landing until July 19, 1918, when it was removed to Glasshouse Landing, along Brunot’s Island.

In 1925, the Dodsworth (along with the towboat Boaz) was dismantled at Brown’s Station on the Monongahela River. Capt. R.J. Hiernaux obtained the roof bell and had it installed on the towboat John F. Klein; his partner, William Campbell, got the big Masonic emblem that formerly hung between the stacks, but did not install it. The deer head from the top of the pilothouse was split in two by a wrecker’s axe and discarded; the deer horns were rescued and today reside at the Ohio River Museum in Marietta. In recent times, the big roof bell has been displayed at the entrance of a riverboat-themed venue in Memphis.

For questions or suggestions regarding the Old Boat Column, Keith Norrington may be contacted by e-mail at curatorkeith@yahoo.com, or by mail through the Howard Steamboat Museum at P.O. Box 606, Jeffersonville, Ind. 47131-0606.