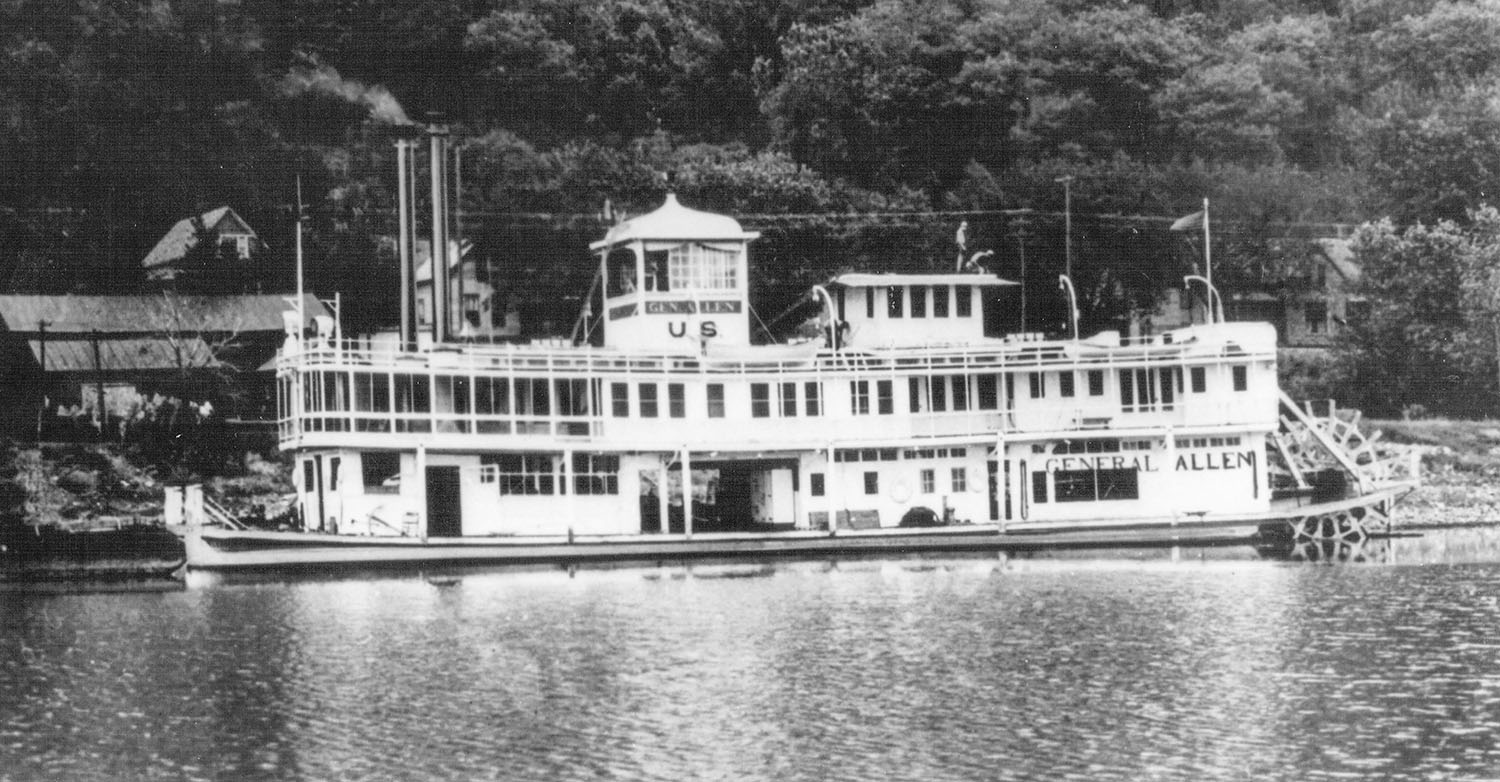 Originally the pleasure steamboat Minnesota, this petite sternwheeler was a product of the Howard Shipyard at Jeffersonville, Ind.

In the autumn of 1915, Edmonds J. Howard, proprietor of the famed shipyard, was summoned to St. Louis by Dr. William Mayo concerning a plan to rebuild the steamboat Oronoco. This wooden-hulled sternwheeler was the first of the private steamboats owned by the brothers Mayo, whose clinic at Rochester, Minn., was world famous. The doctors’ plan was to replace the wooden hull with steel, utilizing the upper works, boilers and machinery. After the visit and exchange of much correspondence, Howard persuaded Dr. Mayo that an entirely new vessel would better serve his needs. Legend has it that the plans for the cabin were drawn on a scrap of paper with the dimensions jotted down in a daybook. A contract cost of $30,000 was agreed upon on November 13, 1915.

Launched in 1916, the new sternwheeler’s steel hull measured 115.9 feet in length, 30.2 feet in width and with a depth of 5.2 feet. In October of that year, the Minnesota ran aground on the Ohio River at French Island (below Owensboro, Ky.) with the Mayo family and a group of friends aboard. A trip up the Green River had just been completed and the riverboat was en route to Louisville when the boat stuck on a sand bar; it was necessary for the trip to be concluded by railroad.

The Mayo brothers (Dr. Charles Horace and Dr. William James) primarily ran the steamer along the Upper Mississippi until 1922, when it was sold at Fountain City, Wis., to the U.S. Army Corps of Engineers.

Renamed General Allen, the vessel operated in the St. Paul District. Fitted with two towing knees, the Allen pioneered the first commercial tow for Federal Barge Lines from Minneapolis in May 1926, with Capt. William Henning in command. The boat was eventually transferred to the Rock Island District before being declared surplus.

Sold at public auction, the Allen was purchased by the Central Barge Line, which restored the original name (Minnesota) and ran the riverboat on the Tennessee River. In December of 1926, the Alexander Mackenzie towed the boat from Paducah to Cincinnati, at which time it was advertised for sale in The Waterways Journal. When no buyers came forth, the machinery was removed and the Minnesota was partially dismantled to become Central Barge Line’s landing boat at Joliet, Ill.

In 1966, the boat was taken to St. Louis by new owners with plans for it to become a floating restaurant. However, it sank while moored on the East St. Louis side of the river for conversion. Raised and repaired, the vessel was towed to Cape Girardeau, Mo., renamed Rebel Queen and used as a restaurant.

The riverboat’s next stop was, again, St. Louis, where the name was changed to River Queen, paying tribute to the former steamer Cape Girardeau/Gordon C. Greene (built by Howard in 1923) which after retirement served as a popular tourist attraction at the St. Louis levee until sinking in late 1967.

The “new” River Queen again changed owners in 1976 and underwent a renovation with the name changed to Cotton Blossom; it was reopened at St. Louis in the fall of 1977. The once-famous boat sank on January 24, 1978, during severe winter weather and was ultimately scrapped.