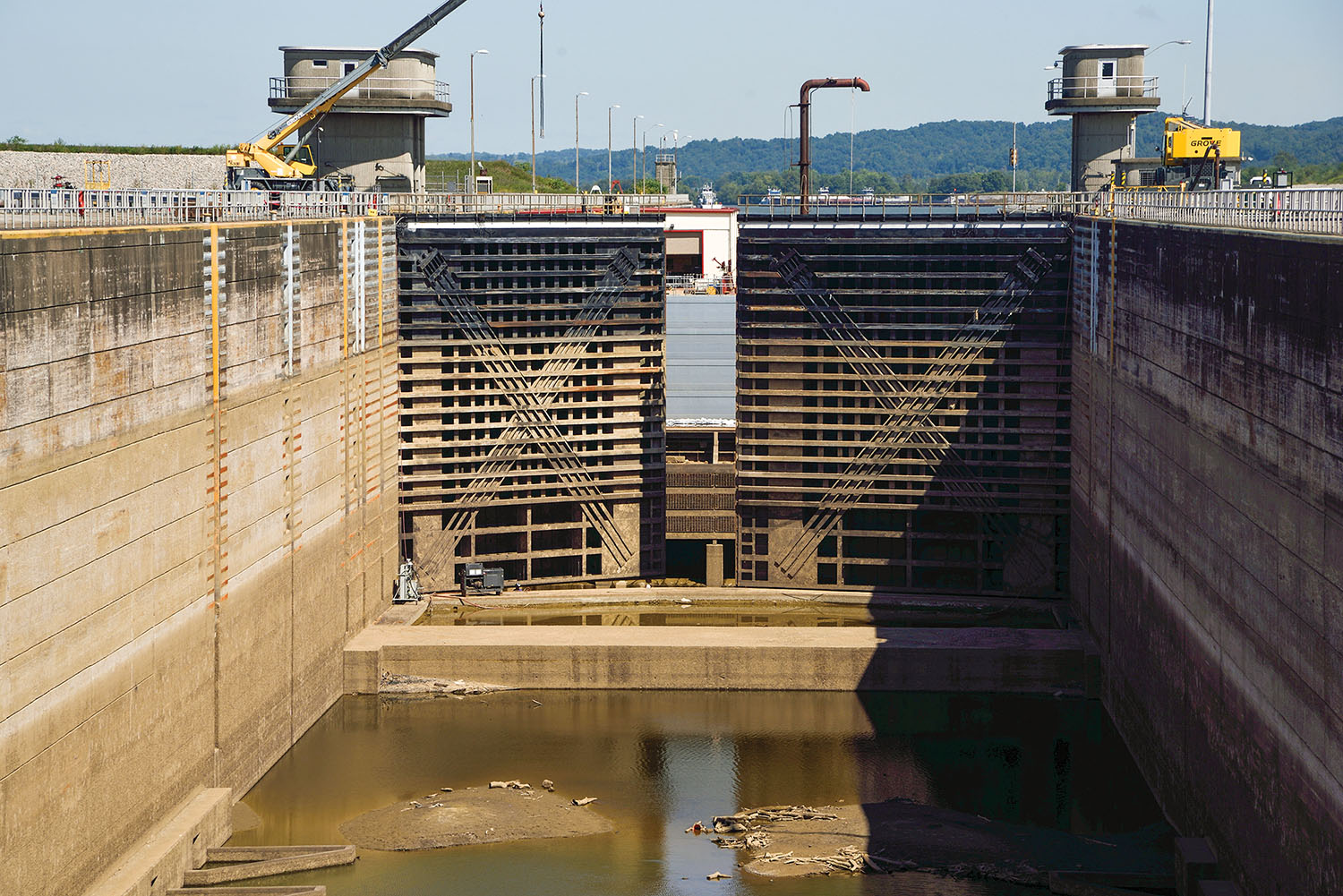 Byrd Is Second Huntington District Lock To Close For Repairs

The towing industry is dealing with two scheduled lock outages in the Huntington Engineer District, as the main lock at the Robert C. Byrd Locks and Dam closed for dewatering and repairs at the end of August.

Work at Robert C. Byrd, at Mile 279.2, is scheduled to continue until about the end of September, according to Jeff Griffin, superintendent of the regional rivers repair fleet’s high-capacity fleet, which is performing the work.

The other delay is at the Willow Island Locks and Dam at Mile 161.7, which has been out of service since the first weekend of July for dewatering and 20-year maintenance.

The fleet is replacing cracks in the miter gates at Byrd and performing other necessary maintenance on the machinery. Each gate is about 60 feet tall and weighs about 280 tons. They are being repaired in place.

Lockmaster Bill Theiss said temporary repairs were made three years ago, and he expects these repairs to last for a while.

Work is being assisted by the crane Henry M. Shreve, the largest owned by the Corps of Engineers and one of the largest on the inland waterways. Griffin said the Shreve and its “toaster rack” will be at the McAlpine Locks and Dam at Louisville next summer to remove four gates from one lock there. The Shreve can lift 550 tons, Griffin said.

Work is being done from the heavy repair fleet tied up in the main lock’s lower approach. The fleet is about 1,190 feet long and has 48 people, which includes crafts such as welders, machinists and electricians, Griffin said. Fleet workers stay in hotels when they are at a particular job site, he said.

On the job, they work in two 10-hour shifts at 12 days on and two off. If a project gets behind schedule, they work 12-hour shifts, Griffin said.

The mv. J.C. Thomas is pushing the fleet.

Delays at Byrd have not stretched as long as they have at Willow Island. Before the market for thermal coal soured, the locks at Byrd were among the busiest on the river. Robert C. Byrd sits between the mouth of the Big Sandy River to the south and the Kanawha River to the north. When power plants consumed more coal than they do now, Byrd was constantly busy.

One morning this week, when no boats were listed on the Corps’ lock queue report as waiting at Robert C. Byrd, there were 24 waiting at Willow Island, one of which had been in queue for two days.

Theiss said commercial craft are no problem during the main lock outage. People operating recreational craft, however, are a bit impatient at times, he said.

“They don’t understand why they can’t go right on through,” he said. “We work them through quickly, but our ‘quickly’ and their ‘quickly’ are two different things.”

Caption for top photo: Repairs are underway to the upper miter gates on the main lock at the Robert C. Byrd Locks and Dam. The dam provides a 23-foot lift. (Photo by Jim Ross)

For more pictures of the construction work at Robert C. Byrd Locks and Dam, click on the slideshow below. 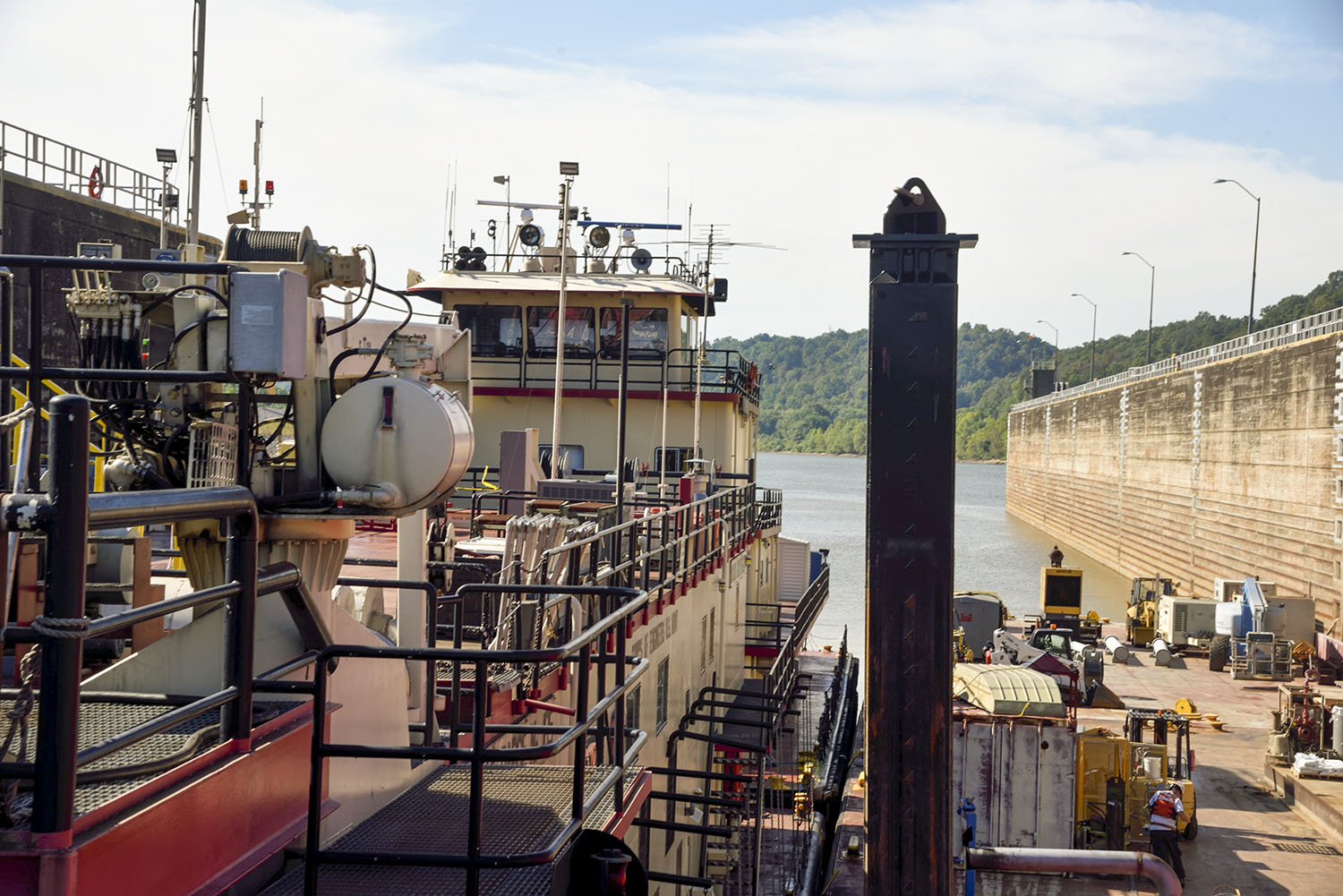 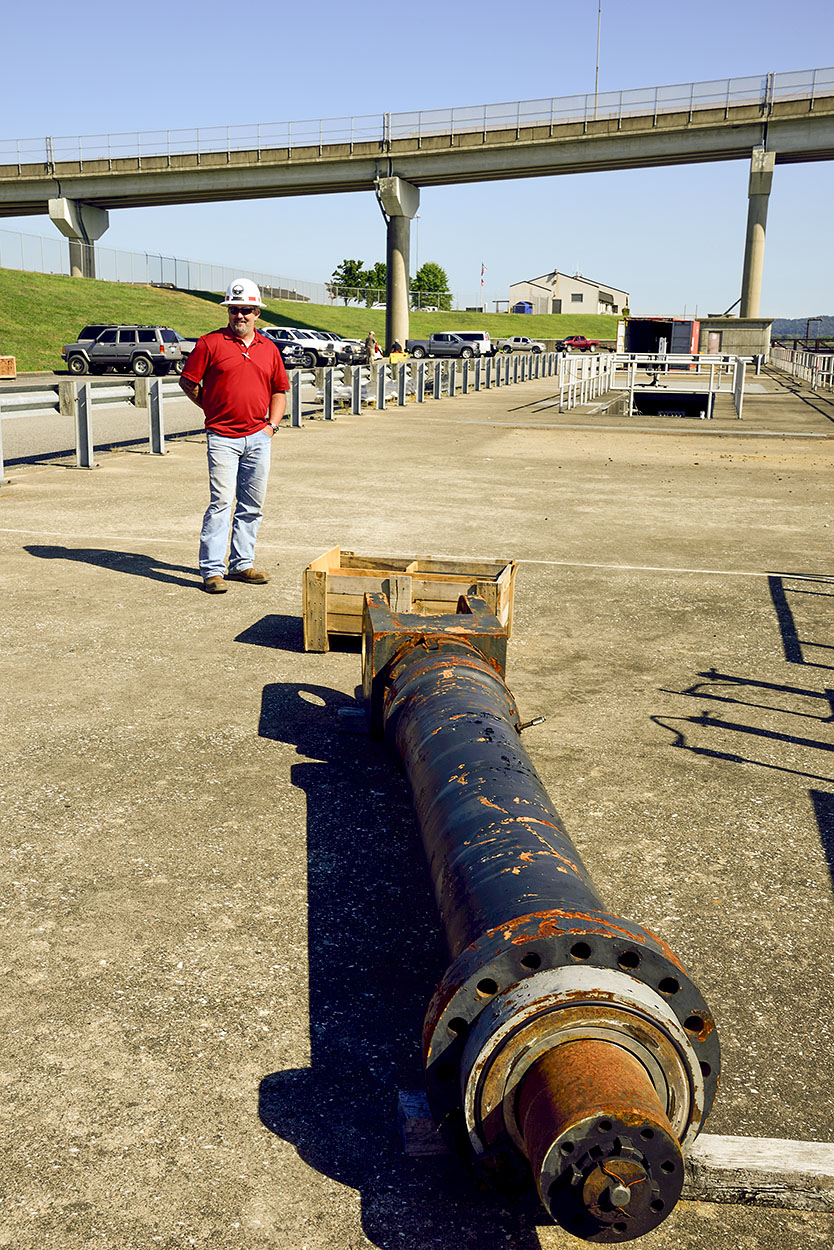 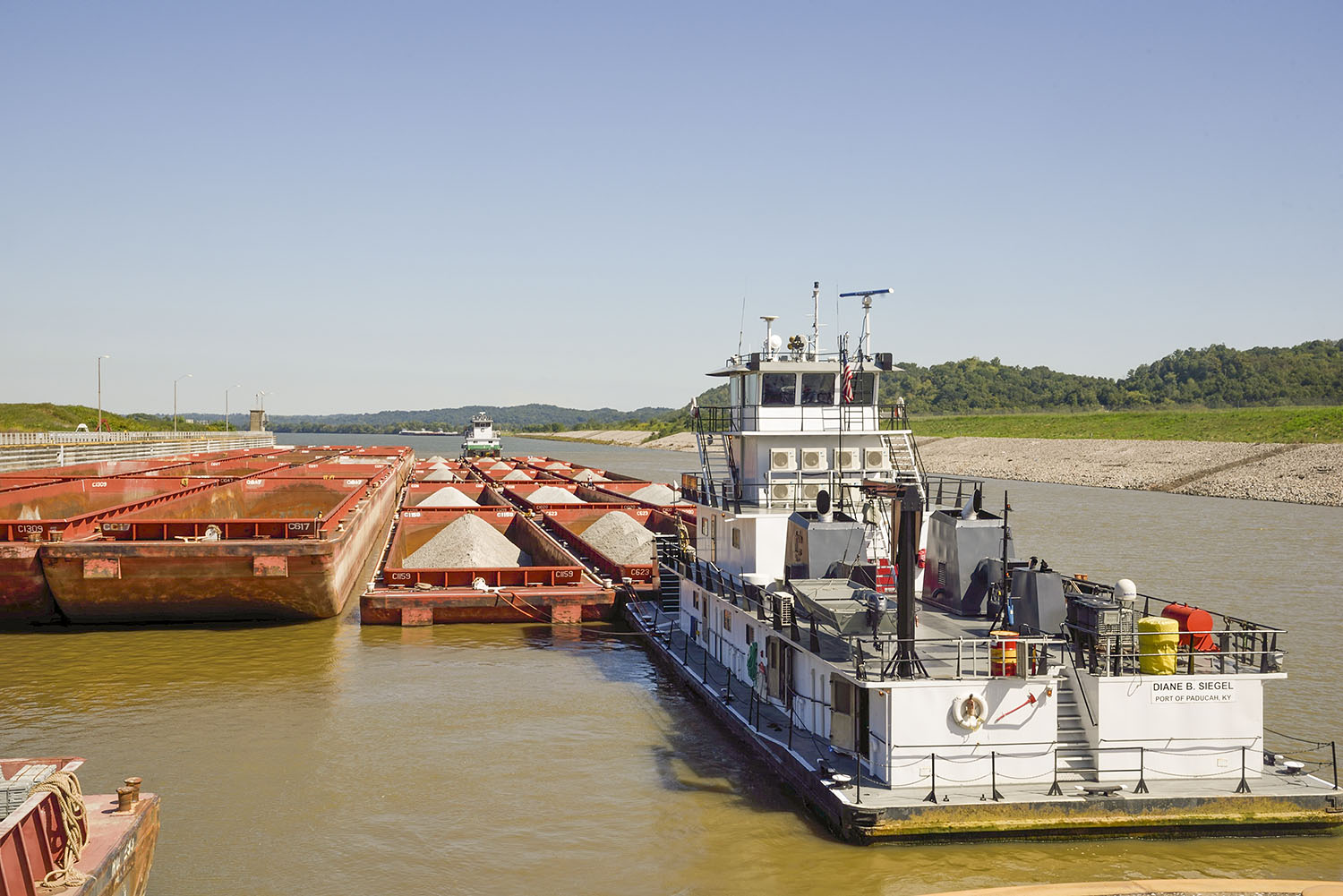 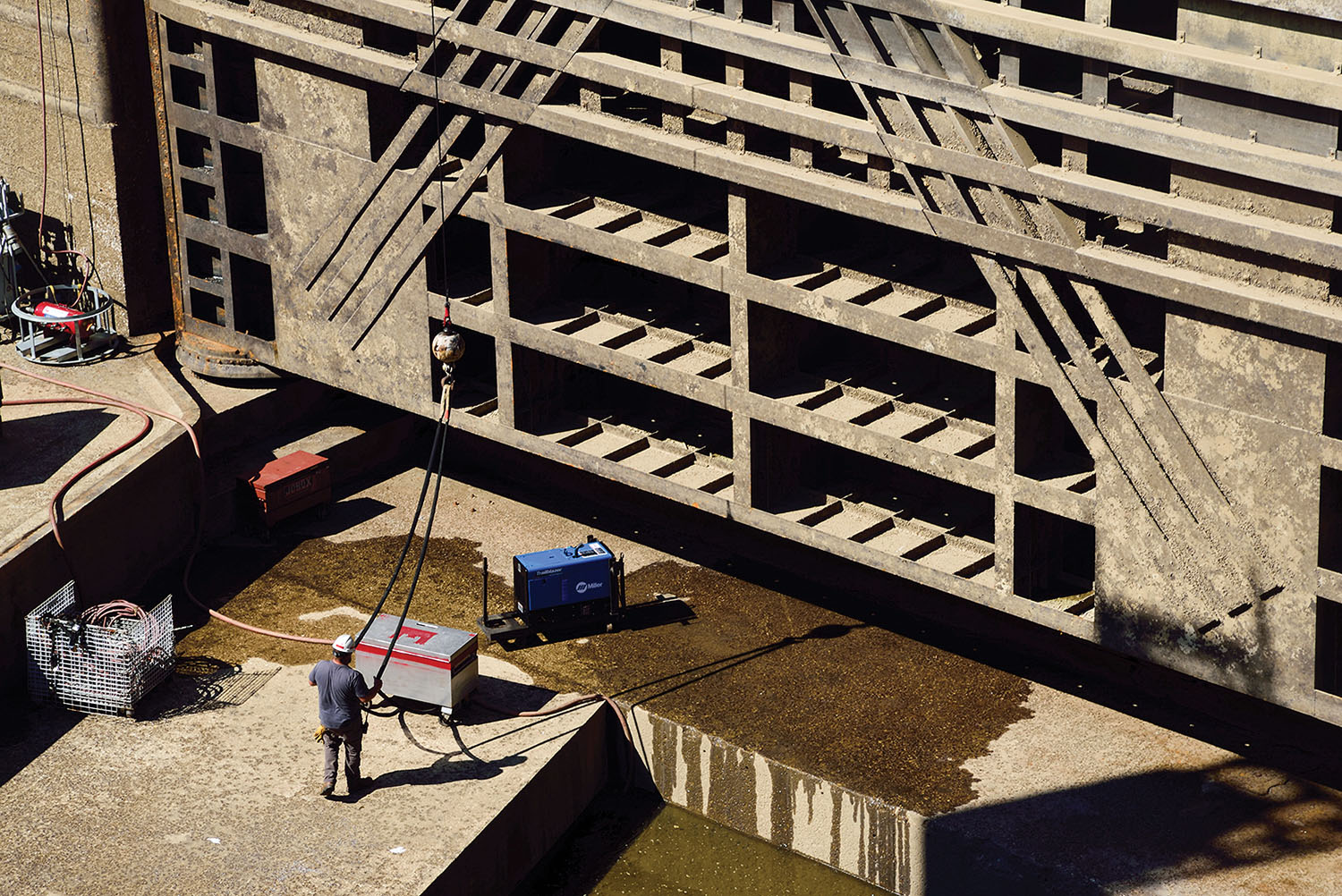 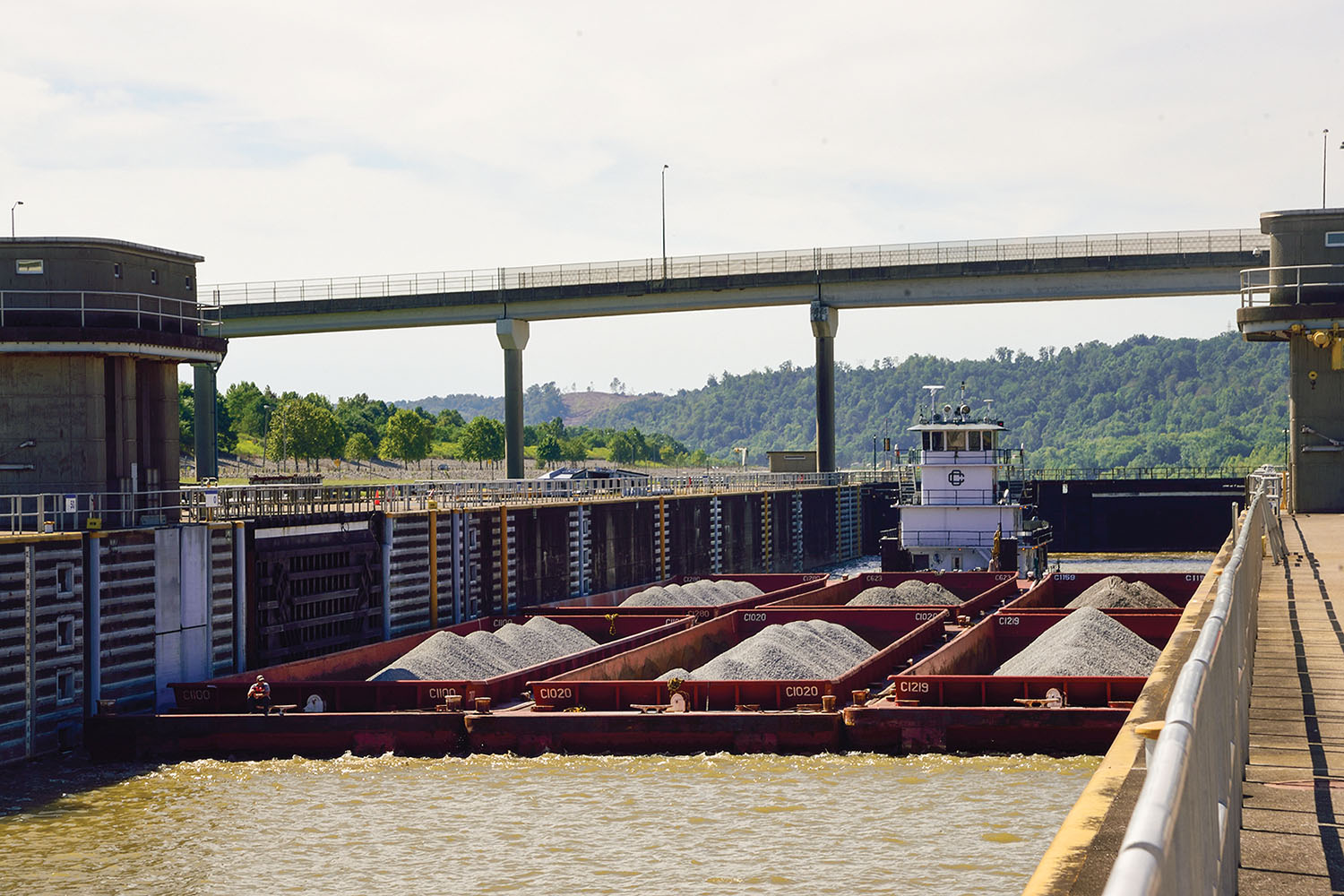 <
►
>
The mv. Diane B. Siegel of Crounse Corporation, foreground, reassembles its 15-barge tow of stone after making its second cut through the Robert C. Byrd Locks and Dam. Another Crounse boat assisted Siegel by pulling its first cut out of the auxiliary lock. (Photo by Jim Ross)