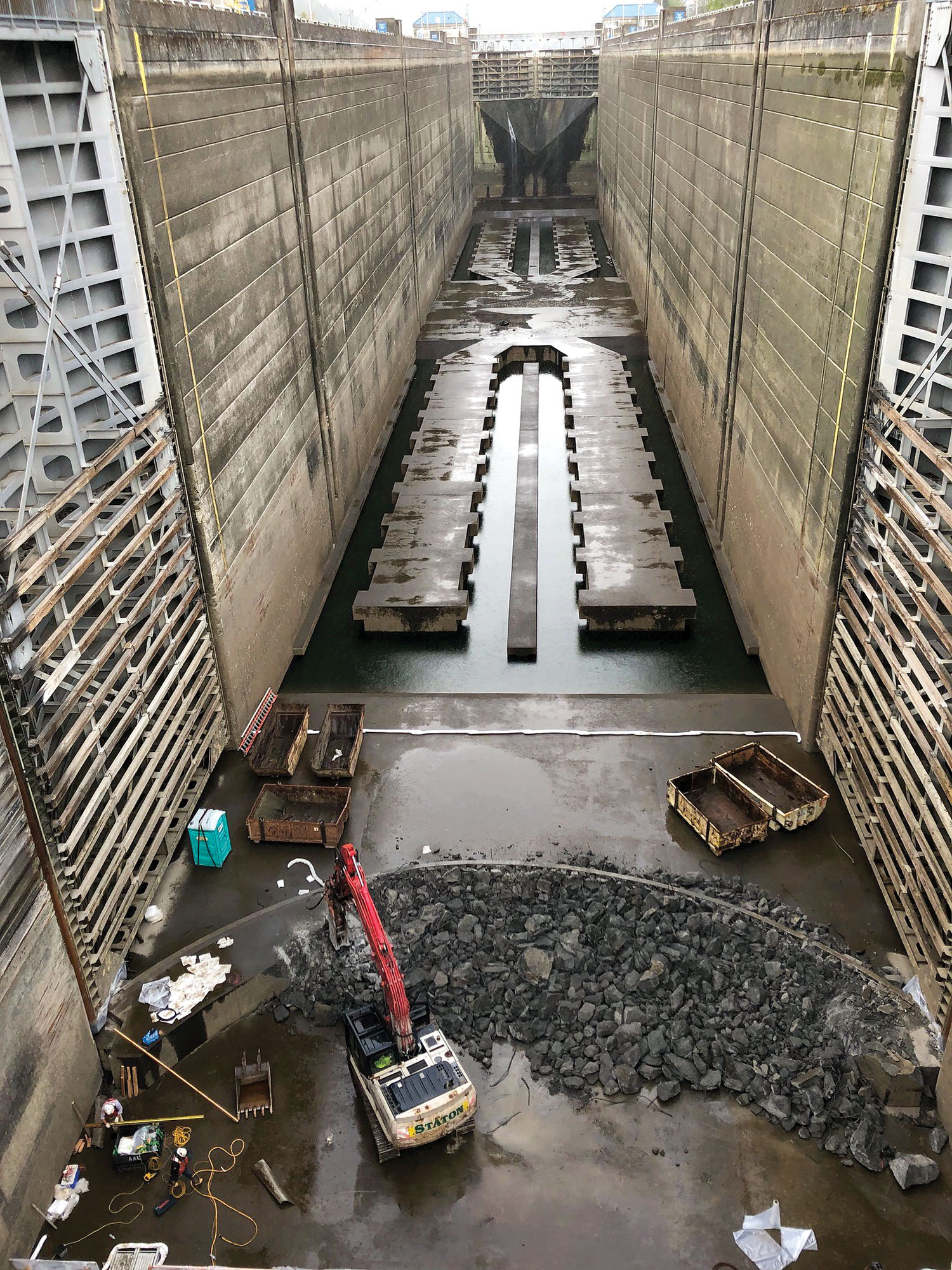 Unexpected damage to concrete structures at the Bonneville navigation lock shut down commercial traffic on the Columbia River. The navigation lock was closed September 5 after lock operators detected problems with the lock during operation. Cracks to the concrete sill were discovered. The sills allow the lock to be watertight. The cracks were causing leaks that lowered levels in the pool.

The locks are maintained annually. According to the Portland District engineering team, the damage they observed was unusual, and the periodic inspections of the dam, last performed January 2017, did not reveal any abnormalities.

The lock was dewatered September 6. The Portland District awarded an emergency repair contract to Advanced American Construction, based in Portland, and crews began demolition and removal of the concrete sill, which measures approximately 5 feet tall, 9.5 feet wide and about 100 feet long.

By September 9, crews were demolishing the faulty concrete so that repairs could begin. Work on the lock will include demolition, drilling holes for rebar, forming the new sill structure and allowing time for the concrete to cure.

A September 11 statement by the Portland Engineer District said the lock will return to service at 10 a.m. September 30.

The shutdown comes at the height of the wheat harvesting season. The Columbia-Snake River System, with eight locks and dams, is a major export corridor for wheat grown in the Pacific Northwest, moving 53 percent of all U.S. wheat exports and $2 billion worth of cargo a year.  The Bonneville Lock and Dam is located about 40 miles northeast of Portland, Ore.

“It’s important to recognize the patience from our Columbia River users, who depend on this critical piece of infrastructure to run their businesses,” said Portland District Commander Col. Aaron Dorf.

“This lock closure is significant, which is why our engineers, experts and contractors are working tirelessly to ensure we get the locks back in service as quickly as possible. It is not lost on anyone in the Portland District that this outage has tremendous impacts to Columbia River users,” he said. “Between now and September 30, our teams will be working around the clock to construct the new sill to restore Columbia River traffic.”

Kristin Meira, executive director of the Pacific Northwest Waterways Association, said, “This is definitely a challenging time. Our two largest barge lines on the Columbia Snake River System report over 100,000 tons of stranded product above Bonneville Dam. There is also at least one large cruise vessel stranded above the lock.  This doesn’t represent all the impacts, of course—the supply chains on the river are meant to be in constant motion, and the stoppage of one link has ripple effects across the entire system. That’s why we support the U.S. Army Corps of Engineers’ efforts to repair and reopen the Bonneville navigation lock as quickly as possible.

“This incident also shows the critical need to fund a comprehensive maintenance and rehabilitation program for the eight locks on the Columbia and Snake rivers,” she continued. “This river system is one of the region’s and nation’s chief cargo transportation arteries, and the failure of any one lock can have a huge and potentially catastrophic impact on the economy of the Pacific Northwest and a number of sectors throughout the nation.”