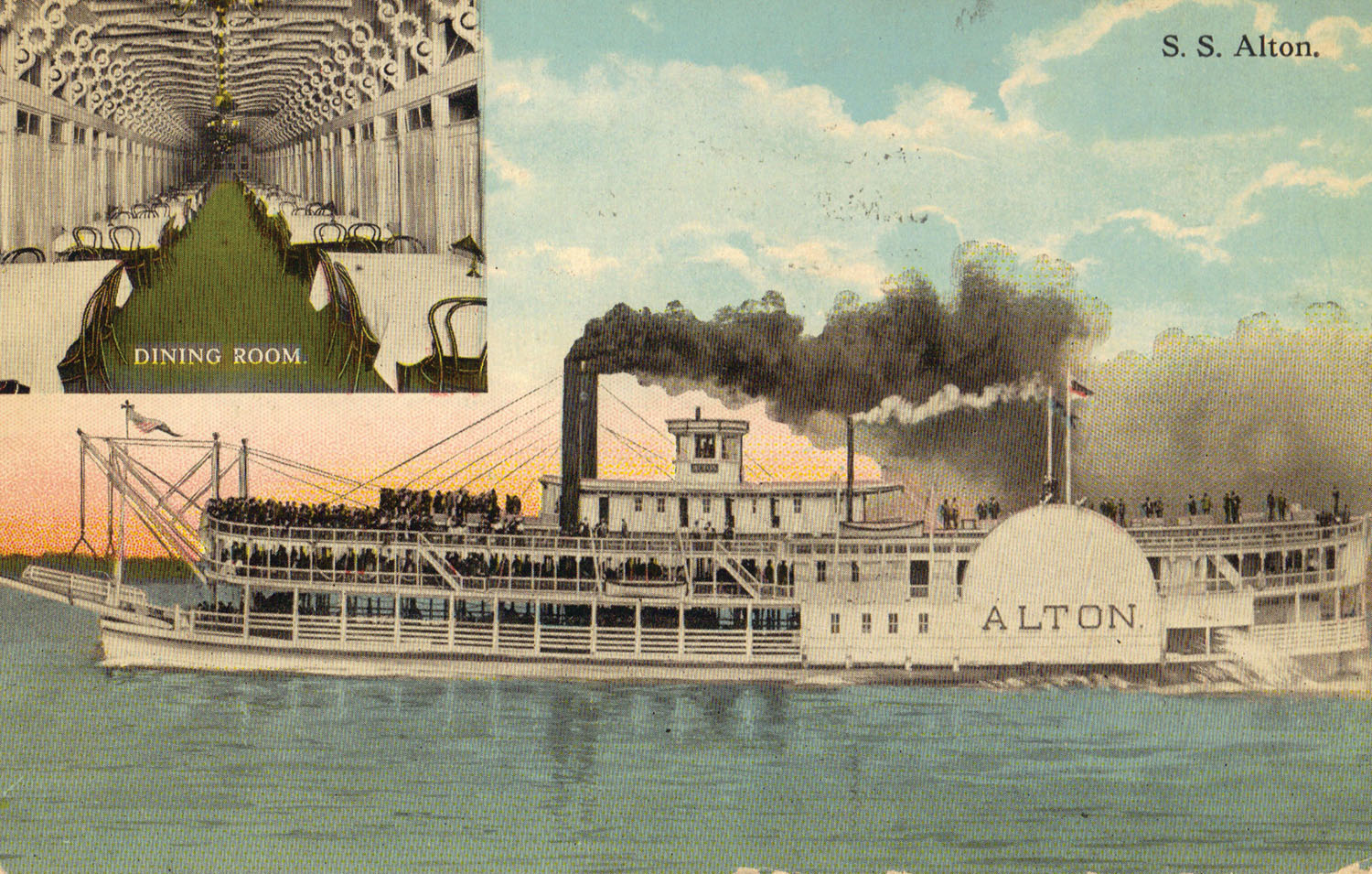 Several steamboats carried the name of Alton, paying tribute to the Illinois city on the Upper Mississippi River above St. Louis. Undoubtedly the best known and most attractive riverboat to bear the name was owned by the Eagle Packet Company of St. Louis.

Built in 1906 at Jeffersonville, Ind., by the Howard Shipyard, it cost $19,950. The handsome sidewheeler boasted an octagonal pilothouse. Constructed on a wooden hull measuring 241 feet in length by 38 feet in width, the vessel was designed to operate in the daily trade between St. Louis and Alton.

The pride of the Eagle fleet, the boat was usually in command of Commodore Henry Leyhe; he was the uncle of famed riverman Capt. William H. (“Buck”) Leyhe, later the beloved master of the steamer Golden Eagle and proprietor of the Eagle Boat Store on the St. Louis waterfront.

The Alton was powered by engines (24-inch cylinders with an 8-foot stroke) manufactured by the St. Louis Iron & Machine Company.

The new steamboat was christened by Dorothy Ferguson, a 10-year-old resident of the namesake city. Reportedly, some 5,000 people witnessed the ceremony at the St. Louis levee on June 10, 1907. A group from Alton presented the roof bell, which was inscribed “Ring for Alton.” All the steamboats in the harbor (and several locomotives) saluted the Alton with their whistles and bells.

The fastest time set by the boat between the Eads Bridge and Alton was one hour and 44 minutes. The boat ran daily, except Monday, to Six-Mile Island, on the Illinois River, with stops both ways at Chautauqua (a summer resort community established in 1885) and Alton. On Mondays, the steamer ran to Kampsville, Ill., on the Illinois River, with daily evening trips to St. Louis. The Waterways Journal (issue of June 15, 1907) reported that the ticket price to Alton was 50 cents with round trip fare for one dollar. The Alton was reputed to be the only St. Louis excursion boat that did not have gambling aboard.

The Alton participated in the “Roosevelt Parade” of October 1907, sponsored by the Lakes to the Gulf Deep Waterways Association. The momentous journey, 112 years ago this month, originated at Keokuk, Iowa, on October 1 and concluded on October 4. The St. Louis Businessmen’s Association paid for the cost of entertaining President Theodore Roosevelt (who was aboard the steamer Mississippi) with 14 governors riding the Alton.

On July 12, 1909, the big sidewheeler hit the bridge at Alton, doing extensive damage to the cabin and paddlewheel on the port side. Repairs were made and service resumed.

Despite being taken, for safety’s sake, to the Duck’s Nest near the mouth of the Tennessee River at Paducah, Ky., during the severe winter of 1917–18, the Alton was crushed in the horrific ice gorge on January 29, 1918. Nothing was located to salvage of the beautiful steamboat. However, in 1966, an ornamental key, presented to Commodore Leyhe by the mayor of Alton on the occasion of the vessel’s initial trip to the city, was found in the old Eagle Boat Store building; it was later displayed in the Midship Museum aboard the Str. Becky Thatcher.