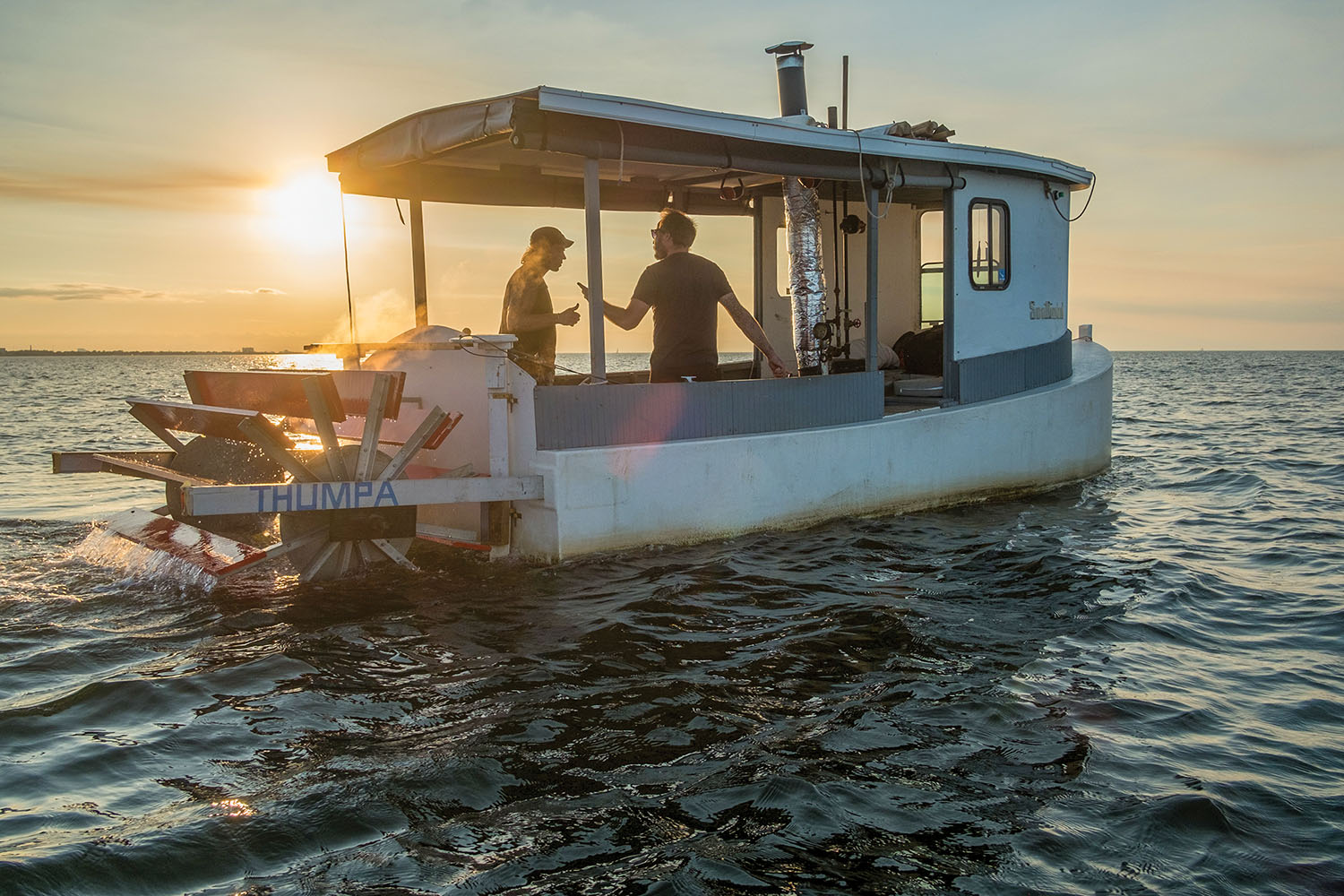 A steamboat, the Mississippi River and moonshine.

While it could be the premise of an adventure novel set during Prohibition in the 1920s and early 1930s, those three subjects are actually the backdrop of a forthcoming book and film project by Max Berthou and Mark Pozlep, adventure artists and researchers from Europe.

Berthou, a Parisian, and Pozlep, a Slovenian by birth who calls Belgium home, recently completed a month-and-a-half-long journey down the Mississippi River from Minneapolis, Minn., to New Orleans, La., aboard a 21-foot-long steam-powered sternwheeler.

Their Mississippi River story began in July 2017, when Berthou contacted Ken Griffard, a calliope designer and builder and steamboat enthusiast who lives in Three Rivers, Mich. Berthou found Griffard via the internet and reached out to express interest in acquiring a steamboat for a practice-based research project he and Pozlep were planning.

Project Southwind, as they called it, would be equal parts adventure, anthropology, art and documentary, with an alcoholic punch at the end. And as it turned out, Griffard had seen a boat for sale that he believed was up to the task.

“I knew of this steam paddlewheeler on the East Coast that would work for them,” Griffard said. “Max and Mark liked it, so I shipped it to my shop in Three Rivers.”

The vessel’s hull and steam system were both homemade in Maine. The builder had actually planned to pilot the boat, named the SS Thumpa, on the Mississippi River, but he died before he could do so. The family put the vessel up for sale. Berthou and Pozlep bought the boat sight unseen.

“We brought it to Michigan, and there it was stored for two years,” Berthou said. “Every three months we traveled there to rebuild everything needed and prepare it for the trip.”

With Griffard’s help, the team set about refurbishing the vessel, which they renamed SS Thumpa-Southwind, retaining “Thumpa” in honor of the previous owner and adding “Southwind” in reference to their project. They outfitted it for sleeping aboard and also set about learning how to operate the steam power plant.

During those trips to Michigan, Berthou and Pozlep also laid the groundwork for the other component of their project: connecting with corn farmers along the Mississippi River and partnering with a distillery in New Orleans, La. Their plan was to collect corn from at least 10 growers—one from each state connected to the Mississippi River—then work with a distillery in New Orleans to produce a small batch of moonshine.

In so doing, they hoped to experience life and people along the Mississippi River, pay tribute to a bygone era in American history through their steamboat and moonshine, and take a deeper look at ecological and environmental issues facing river communities.

By late summer, the boat was ready for the Mississippi River, following sea trials and training on Corey Lake near Three Rivers, Mich. Berthou and Pozlep had grown into able and confident pilots, Griffard said. As steamboat pilots, they were ready for the 1,200-plus-mile journey from Minneapolis to New Orleans, although they admittedly didn’t fully know what to expect.

“The river itself, until you try it, you don’t know,” Pozlep said.

The boat arrived to the Minneapolis area on Labor Day, September 2, and the team set out the following morning. Berthou and Pozlep boarded the steamboat that Tuesday morning before dawn, brewed coffee and built the fire to heat the boiler.

“We needed a lot of wood,” Pozlep said. “For one day of travel with the steam, one third of the boat was full of wood.”

In the mornings, it would take about an hour and a half to heat the boiler to the pressure needed for steaming. Once the pressure reached the proper PSI for steaming, either Berthou or Pozlep would open a steam valve, kick start the engine and engage the paddlewheel.

“We talked in the morning when we were making coffee,” Berthou said. “Then we’d make 10 hours of travel every day. After 10 hours, we’d speak to one another as if we didn’t see each other the whole day, because during the day you can’t.”

Berthou and Pozlep would each take two-hour watches. Besides steering the steamboat, the person on watch was constantly adjusting valves, adding wood to the fire, monitoring boiler pressure, pumping water onboard and greasing the engine, pistons and chains.

Their routine in some ways ran against how Mark Twain in “Life on the Mississippi” described steamboat pilots, “A pilot, in those days, was the only unfettered and entirely independent human being that lived in the earth.”

“It’s a beautiful idea,” Pozlep said of the journey in retrospect. “It’s a romantic idea, but it’s very hard.”

“After two hours of driving this boat, you go immediately to take a nap, because you were completely exhausted,” Berthou said. “We were taking two naps a day, because it’s taking so much energy from you.”

Besides the work inside the SS Thumpa-Southwind, there were also perils outside the vessel. Between driftwood and dikes, the team broke their rudder three times.

They also took a short jaunt up the Ohio River to Paducah, Ky., with the help of a 6 hp. outboard motor.

“I thought maybe it’s better if we go outside the track and go really close to the land to escape the current,” Pozlep said. “Of course, we hit a dike and broke the propeller. It was a bad situation.”

“White caps started up,” Berthou recalled. “The wind was against the stream, so the waves were really high. Our boat is a flat hull, so perfect.”

Once they safely docked the boat, they had a hard time finding a replacement propeller for the outboard.

“Of course, everyone has at least 100 hp., so it’s like, ‘Why are you having this stupid small motor?’” Pozlep said.

At night, Berthou and Pozlep would often beach the SS Thumpa-Southwind either on the riverbank or on an island in the channel. Especially below St. Louis, Mo., where the river is increasingly industrialized, they said they could go days without much interaction.

“It was complete no-man’s land,” Berthou said. “After five days, we’d try to stop to restock and clean ourselves. We spent almost a month like this in remote places. At the end, when we finally understood how to beach and where to beach, it was the best. It was beautiful. It was amazing.

“The nature is so strong and so beautiful,” he added. “This was the best part.”

The pair used driftwood for fuel. And since their trip fell soon after the longest Mississippi River flood in recorded history, there was plenty of driftwood available. They said they could see the devastating impacts of the 2019 flood. In spite of all that loss, the people they met along their journey greeted them with generous, open arms.

“Everyone was really hospitable,” Pozlep said. “This was one of the things about the river people. Even the people who suffered a lot from the floods opened their doors and offered us coffee and eggs.”

Pozlep added that their European accents and unique vessel also drew people in.

Along the way, the team collected some two tons of corn, 42 varieties in all. They carried samples from each farm aboard the SS Thumpa-Southwind, with the full quantity sent directly to Seven Three Distilling in New Orleans, their partner distillery. Near Baton Rouge, La., they left the Mississippi River and took the shorter Atchafalaya River southward to the Gulf Intracoastal Waterway. They then took the Intracoastal Waterway east to the Harvey Canal. They arrived in New Orleans October 20.

In the two weeks that followed, Berthou and Pozlep worked at Seven Three Distilling on two batches of moonshine. In all, the two tons of corn collected produced 2,000 bottles of their signature Southwind moonshine. Half will be sold in the United States, while half will go to the European market.

“The moonshine tells the story of the Mississippi River,” Pozlep said. “The moonshine is a genie in the bottle and a map of the territory.”

Berthou and Pozlep, along with a film crew and accompanied them down river, will now focus on producing a book, soundtrack and film telling the story of their Mississippi River adventure. They hope to debut the film in New Orleans next fall.

To learn more about Southwind, go online to www.Southwind-Project.com.

This is Berthou and Pozlep’s second collaboration involving a vessel and maritime adventure with an alcohol product at the end. In 2015, the pair sailed from France to Island of Islay, Scotland, where they turned their vessel into two whiskey barrels. They then aged single malt Scotch whiskey in those barrels, producing 733 bottles of Hogshead scotch. That venture likewise produced a book and forthcoming film.

Their next project, set for 2021, will likely involve sailing a bamboo vessel from Kyoto to Hiroshima.

“We’re thinking to build a boat out of bamboo and then burn the whole boat to create the coal for purifying the whiskey,” Pozlep said.

Caption for top photo: The SS Thumpa-Southwind was built in Maine and outfitted in Michigan for the trip from Minneapolis to New Orleans. (Photo courtesy of Maxime Berthou and Mark Pozlep)