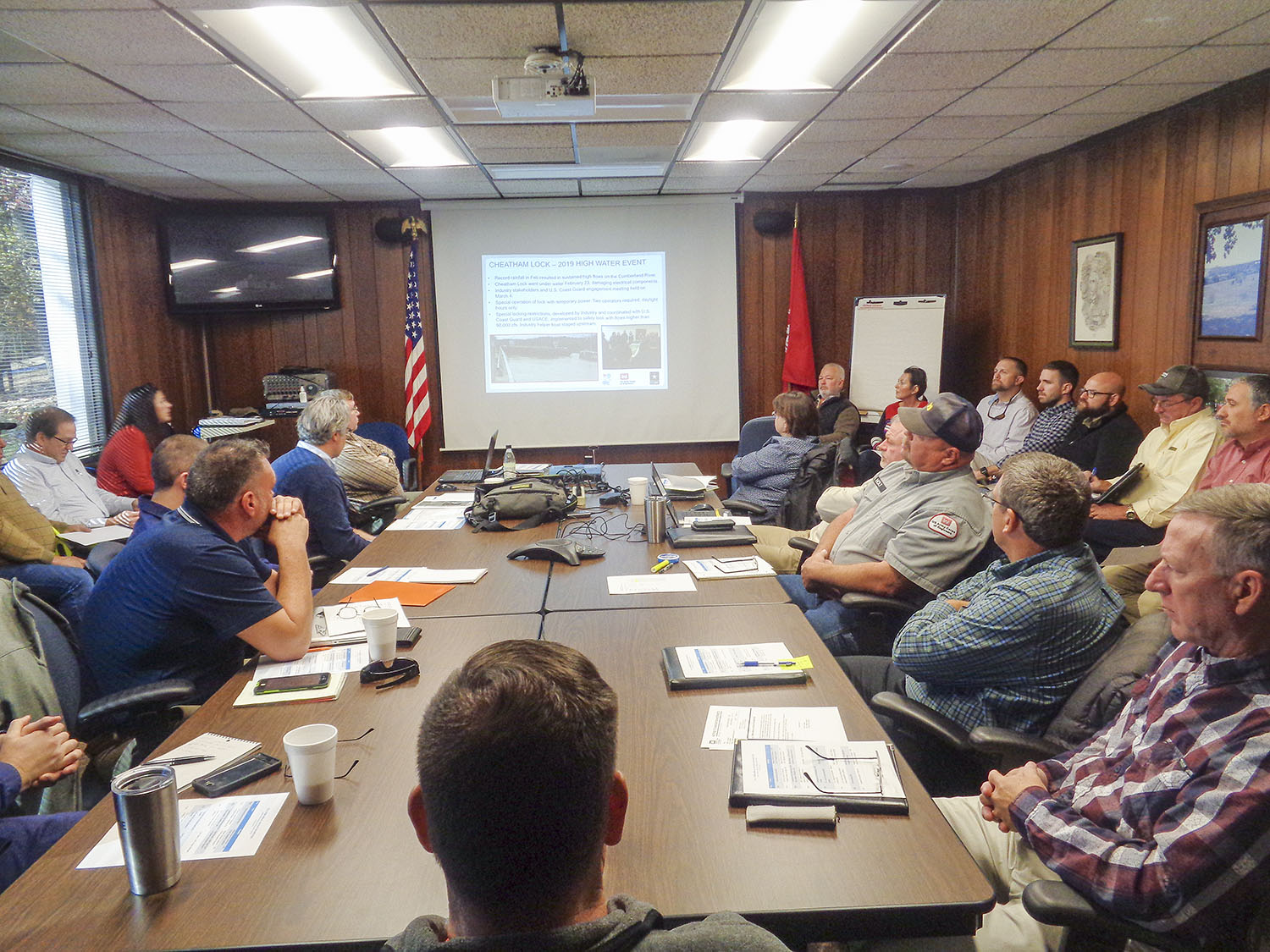 A crowd of more than 30 people squeezed into the Lake Barkley Resource Manager’s Office November 14 to hear about upcoming plans affecting river navigability in the coming months at the Fall Semi-Annual Navigation Meeting.

Representatives from the U.S. Army Corps of Engineers, the U.S. Coast Guard, the Tennessee Valley Authority and a contractor with the Kentucky Transportation Cabinet were all on hand to discuss upcoming projects.

The total project cost is $792 million, as calculated using October 2018 prices. Of that, the lock and associated facilities are projected to cost $786 million with the road and bridges an additional $6 million. So far, $279.4 million has been expended through September 2019, and the project is 35 percent complete, Getty said. The earliest possible completion date is December 2024 with efficient annual funding, he said. He noted that the lock project was reauthorized in the America’s Water Infrastructure Act of 2018 for $757,666,000, at the October 2017 price level.

The lock excavation contract was recognized as substantially complete January 22, 2019, Getty said. The current focus is on the $240 million lock chamber contract awarded in September 2017 that is currently funded through December 11, 2020. The lock chamber construction is projected to be complete, at the earliest, in June 2023 with efficient annual funding. An award for the approach walls and decommissioning contract is expected in September 2021 with the final step being an award for site restoration, which could be in September 2023.

The lock chamber construction contract includes constructing all features located fully within the cofferdam. Getty said the construction should have minimal navigation impacts. Three tower cranes are being used. Two new crossings over the channel downstream of the existing lock have been approved by the U.S. Coast Guard for a concrete conveyor and a pedestrian bridge. Current work includes construction of a secant pile wall for shoring up the foundation where needed as well as foundation cleaning in preparation for concrete. Reinforced concrete shafts are being drilled on the riverwall monolith foundations, and there will be shafts on portions of the land as well due to bentonite in the foundations, Getty said. A phased demolition of the existing dam spillway is also necessary for safety, he said.

The Kentucky Lock project includes adding a new lock twice as long as the existing 600-foot-long lock at the dam to reduce the significant bottleneck caused by high Tennessee River traffic levels and the current lock’s size. The Corps has estimated the average delay for commercial tows going through Kentucky Lock is between eight to 10 hours, near the highest in the country.

The contract for the downstream cofferdam was awarded for $67.1 million to Johnson Brothers in September 2016 with an initial projected completion date of August 2020. Current work has focused on fabrication and installation of 10 concrete shells at the site, each of which is lifted into place, sealed and then filled partially with tremie concrete, placed through a pipe underwater to the bottom of the shell to cure. The ninth shell was set November 9, Getty said. The shells form part of the downstream cofferdam and the permanent lock wall. When completed, the downstream cofferdam will make it possible to excavate and then construct the new lock in dry conditions. Following completion of the one remaining concrete shell, the Corps will then turn its attention to construction of circular sheet-pile cells, likely in February through May, Getty said.

“We’re still going to have navigation impacts through the spring and into the summer, just to set your expectations,” he said.

Future navigation impacts will include 12-hour night closures for another three to four days during ongoing placement of sandbags, then a gap followed by one to two days of additional night closures, Getty said. Night closures do not take place if nine or more boats are waiting to lock through, he said.

Moreover, he said, “If we have a Barkley (Lock) closure, then we won’t have these night-time closures on Kentucky unless there is a small queue.”

The one remaining shell should be set in late December and require less than a one-day closure for shell placement, Getty said. It is expected to be followed by five to six days of 12-hour night closures after placement for sandbags. Closures and a second helper boat may be needed for sheet-pile cell construction, Getty said, adding that project leaders would assess the need for a special meeting to address it with the industry if needed.

Getty noted that a meeting between the contractor and port captains September 19 to revise the Marine Safety Plan as a result of changes due to the eighth shell was productive, and resulted in two helper boats assisting with navigation. Other recent work on the project has included the addition of a new maintenance building in August, demolition of the former maintenance building, which began in September, and the first major bridge girder removal, which took place September 23.

When looking at the Kentucky Lock addition project as a whole, Getty said, obtaining necessary funding to complete construction appears to be more of an issue.

“We’re saying the earliest we can finish Kentucky Lock is 2024,” he said. “That’s likely to be pushed back six months or a year depending on the funding issues with the (Inland) Waterways Trust Fund.”

Getty also discussed the new bio-acoustic fish fence recently installed at Barkley Lock as part of a test for new technology designed to deter the spread of Asian carp.

The BAFF, as it is frequently called, emits a low frequency sound wave and a curtain of bubbles that appear as a diagonal line across the lock approach on the downstream side. Flashing white lights may also be visible during times of low water. The system has been installed below the level of the lock sill and is encased in protective concrete. It will be turned on for a week and then off for a week for a two-year test period, during which scientists will monitor the movement of carp fitted with transmitters.

“We’re hoping this system has minimal impacts on navigation,” Getty said. “That’s what it’s designed for. If you do experience any kind of impacts, we want to hear about it.”

Megan Kentner Simpson, chief of the navigation section for the Corps’ Nashville district, highlighted the upcoming February 24–April 10 closure of Old Hickory Lock to install slots for the upper closure structure. Similar work on Pickwick Lock is expected to follow once the work on Old Hickory is completed.

The work involves cutting slots and putting in liners and fillers to create the ability to set a closure structure (stoplogs), which allow dewatering of the lock chamber for maintenance, she said.

Also planned is an electrical rehabilitation contract for Chickamauga Lock, although the contractor has not finalized the schedule. The work is expected to have minimal impacts to navigation, she said.

Barkley Lock’s emergency gate rehabilitation contract schedule is also not finalized. The Corps anticipates beginning work on removing the gate in early January so the contractor can begin rehabilitation.  Closures between January 6 through 31 are anticipated for gate removal, Kentner Simpson said. Once removed, the rehabilitation work should not create any impacts on navigation, she said.

Brad Bishop, the Nashville district’s lead civil engineer for the navigation section, also discussed an update to the Cumberland River Waterways Action Plan. Currently, lockages are discontinued when flows reach 90,000 cubic feet per second at Cheatham Lock. A proposed update includes language that the closure may be modified to a restriction based on collaboration between the Coast Guard, Corps and industry. Factors affecting the decision will include but not be limited to flow rate, river state (stationary, rising or falling), extent/duration of current closure and specific vessel requirements. The Corps plans to solicit additional comments before finalizing the plan.

Finally, representatives for a contractor working with the Kentucky Transportation Cabinet spoke about the plans for replacement of the U.S. 51 bridge connecting Wickliffe, Ky., to Cairo, Ill. The bridge is in the preliminary engineering phase, said Jason Stith, bridge technical manager for the Michael Baker International office in Louisville, Ky.

The existing bridge, built around 1936, is the longest cantilever truss bridge in Kentucky. Contractors want to consult with industry officials about pier placement for the new bridge, which is expected to be built within a 2,000-foot corridor downstream of the existing bridge, near the confluence of the Ohio and Mississippi rivers, Stith said. Environmental studies of the area are underway, he said, and preliminary engineering is expected to take one to two years and the final design one to three years. Simulations of potential bridge alignments and pier placements are scheduled with Seamen’s Church in March, Stith said. Conversation about the bridge at the meeting focused on the importance of maintaining at least a 900-foot main span and preference given for locating the span along the center of the river to keep it away from fleeting areas, even though the main channel is off to one side.

Caption for top photo: More than 30 people crowd into a meeting room at the Lake Barkley Resource Manager’s Office Nov. 14 for the Fall Semi-Annual Navigation Meeting. The meeting included timetables for construction projects that could affect navigation on the inland waterways. (Photo by Shelley Byrne)