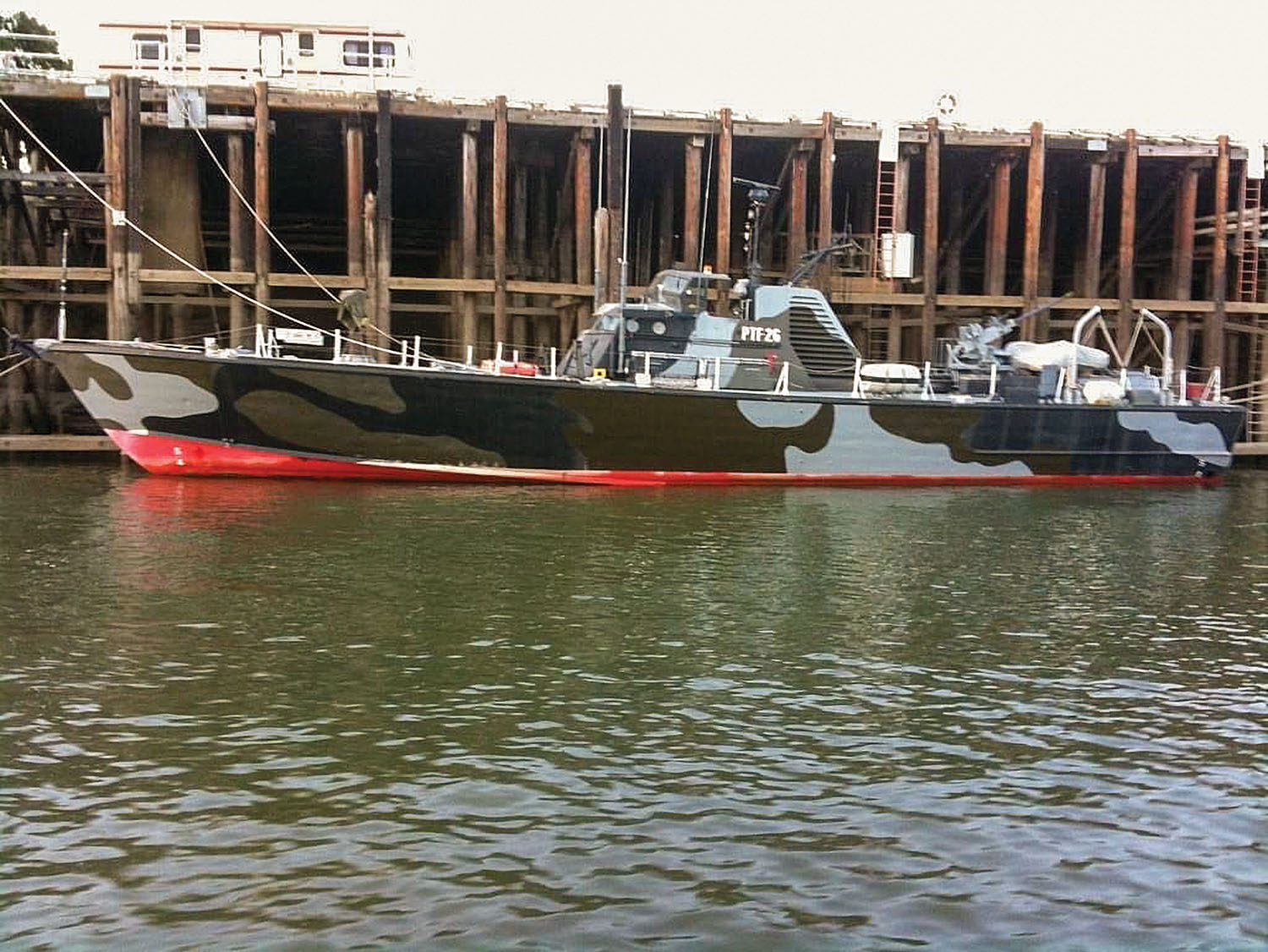 The last of the Vietnam War era’s fast patrol boats has new ownership, a continued mission of service and plans for a home port on the Ohio River.

The Maritime Pastoral Training Foundation Ltd., consisting of friends and fellow Seamen’s Church Institute chaplains Kempton Baldridge, Winston Rice and Tom Rhoades, pulled together the funds to buy PTF-26 in March to use as a vessel to train maritime chaplains and youth and also to continue its mission of training and empowering young women who may be interested in careers within the river industry. On May 12, the 95-foot aluminum boat was licensed as a vessel in public service in Kentucky.

However, because of the coronavirus, it will be at least August before a yacht carrier the foundation has engaged can trans-ship PTF-26 from Ensenada, Mexico, through the Panama Canal and into the Gulf of Mexico.

Plans call for PTF-26 to then travel as a hip barge with a commercial carrier, up the Mississippi River to Cairo, Ill., where it will once again be under its own power going up the Ohio River, arriving no earlier than mid-September.

With fundraisers having been canceled because of the coronavirus, the foundation is still looking for tax-exempt, charitable donations to pay for freight costs of $86,000 to bring PTF-26 to the former Jeffboat shipyard in Jeffersonville, Ind., where it will go through maintenance and potential minor repairs until a riverfront improvement project is completed at its future home port in Paducah, Ky. Total costs, including the move from Sacramento, Calif., to Ensenada, fuel costs and port fees could add up to as much as $150,000 in all.

Those interested in learning more detailed plans for the vessel, following its journey or donating may do so at the foundation’s newly created website for PTF-26, lastamericanptboat.com.

For now, the boat remains moored in Sacramento, where PTF-26 most recently carried the name “Training Vessel Liberty” and was the property of the former Liberty-Maritime Museum. The boat operated as a living museum and youth training vessel as the first and only all-female Sea Scout training ship. The Maritime Pastoral Foundation plans to re-christen PTF-26 as the Training Ship Jesse L. Brown, in memory of the ensign who was the first African American naval aviator and also the first African American naval officer to be killed in action, December 4, 1950.

Plans call for the boat to be moored in Paducah within the next few years. The city is in the planning and design and environmental testing phases of a $10.4 million BUILD grant that will include a new excursion pier for river cruises, a redeveloped riverfront plaza and transient dock landing improvements. Construction is set to begin in 2022.

“Eventually we would love to support this historic vessel on our riverfront,” said Katie Axt, director of Paducah Main Street and downtown development director for the City of Paducah.

She said PTF-26 would be a good fit because of its ties to history and the river industry in Paducah and that it would also serve as a mechanism to draw more people downtown to the extended riverfront park.

Until its new dock is ready, the foundation has received permission to tie PTF-26 up at the former Jeffboat shipyard. Several Jeffboat employees plan to offer their wisdom, training and experience to perform maintenance and repairs so that the vessel is in “ship shape” before going to its new home port, Baldridge said.

“I was thinking what a beautiful thing it would be to have a chaplain’s school where we can pass on what we’ve received, to pay it forward but to do it in a way that respected the profession,” he said.

Finding a historic boat and having the opportunity to preserve that history was a bonus he never expected.

“I had dreams, but never dreams this big,” he said.

Baldridge said when he told Rice, a longtime friend, about the boat for sale, he remembers Rice’s response. “He said you could live 12 lifetimes and not have an opportunity like this,” Baldridge said. “As a kid, this is the kind of opportunity I would dream of.”

PTFs were the Vietnam War’s version of the famous PT boats used in World War II. They were heavily armed, near-coastal gunboats, used mostly by special forces. PTF-26 is the last of only four Osprey-class PTFs, which were bigger and had aluminum hulls. PTF-26 is the final PTF and the last U.S. PT boat ever built.

Following its service in Vietnam, PTF-26 returned to the United States in 1971. The boat continued to be used by the Navy for patrol, training and equipment testing, serving as part of Coastal River Squadron One in Coronado, Calif., then at the Pacific Missile Test Center at Port Hueneme, Calif. The boat was released by the Navy in 1985, but brought back for further service from 1987 to 1990 before its final Navy decommissioning.

The vessel was acquired as part of a private purchase, but PTF-26’s value has been estimated at $3 million.

“The thing is, she’s not a replica,” Baldridge said. “She’s the real thing. She was there during Vietnam. She’s the last American PT boat and the first maritime training ship on the Western Rivers. She’ll also be the first historic museum ship in the Commonwealth of Kentucky and, of course, the first home of the maritime chaplain school.”

The foundation hopes to convene the 21-day residential basic chaplain’s course on PTF-26 beginning as soon as summer 2021. The program would be sponsored and conducted by the Seamen’s Church Institute. As part of its program, chaplains-in-training would see what a mariner’s life aboard a vessel looks like for a three-week hitch alongside mastering crisis response. They also would have the opportunity to call on vessels and meet mariners and could stay a little longer at times instead of making a quick trip in and out on a boat delivering groceries or supplies.

Some of PTF-26’s more recent updates make it ideal for life on the inland river system, Baldridge said. A group of high school girls in the Sea Scouts used the boat as a floating laboratory, repowering it, with some guidance, with 16V-71 twin, 635 hp. direct drive Detroit diesels, although it has its original bronze propellers. It also received updated electronic and other upgrades along the way.

“It’s our hope that in addition to serving as a museum and a training base for maritime chaplains that she will also continue her 20-year mission preparing young women for application to and entrance into the military and maritime academies, looking toward careers on the water,” Rice said.

Rice already works with the Women Offshore program in Houston, Texas, and he sees PTF-26 as an important way to help diversify the workforce on the river. In addition, he said, the foundation would also be interested in working with other civic groups, such as Riverworks Discovery, to provide a unique experience for youth who may be interested in maritime careers. Baldridge added that although the region doesn’t have many troops of Sea Scouts, PTF-26 could provide a unique training experience for Sea Cadets and Naval Junior ROTC cadets, both of which Kentucky has in abundance.

“She’s one of a kind,” Rice said. “She’s the only one left. Fortunately, the aluminum hull has been in fresh water most of her retirement. We’re really looking forward to getting her back into service.”
Rhoades joined the foundation’s board six months ago after a career that has involved both commercial work as a towboat cook and, since 2018, chaplaincy on the Lower Mississippi, Gulf and Houston Ship Channel.

“We’d been talking about the dream of having a location where our mariners could come together ever since I started with Kempton,” Rhoades said. “The question is how do we really create a training that’s efficient and cost effective for chaplains? That’s the vision of having a boat. We can do everything we need to on a boat. If we don’t have a boat, we can’t.”

He sees PTF-26 as an important tool for chaplains in providing pastoral care at other times as well.

“I don’t think there are any others besides Seamen’s Church Institute serving Jones Act mariners on the river, and that’s a lot of people to serve,” Rhoades said, adding that PTF-26 will increase the time chaplains will be able to spend with those they serve.

“Anything we can do to increase the possibility of face-to-face interaction with mariners has huge dividends,” Rhoades said.

Baldridge said that even before PTF-26 is at its new home in Paducah, the foundation is already ready to serve others using the boat. Baldridge recently wrote to Kentucky Gov. Andy Beshear, making him aware PTF-26 is coming and offering the boat as available at the state’s disposal to serve as an all-weather, high-speed incident command post with less than two hours’ notice.

“She was built as a very fast, very nimble warship, but what she does now is she inspires, she informs, and she trains,” Baldridge said.

With all of the possible uses for PTF-26, Baldridge also said it’s important not to forget one other thing. Helping PTF-26 with all of its missions will be the simple fact that the boat catches the eye. It is unlike any other vessel anywhere and not anything someone would expect to see motoring on brown water. He said, “When was the last time you saw a PT boat on the Mississippi and Ohio rivers?”