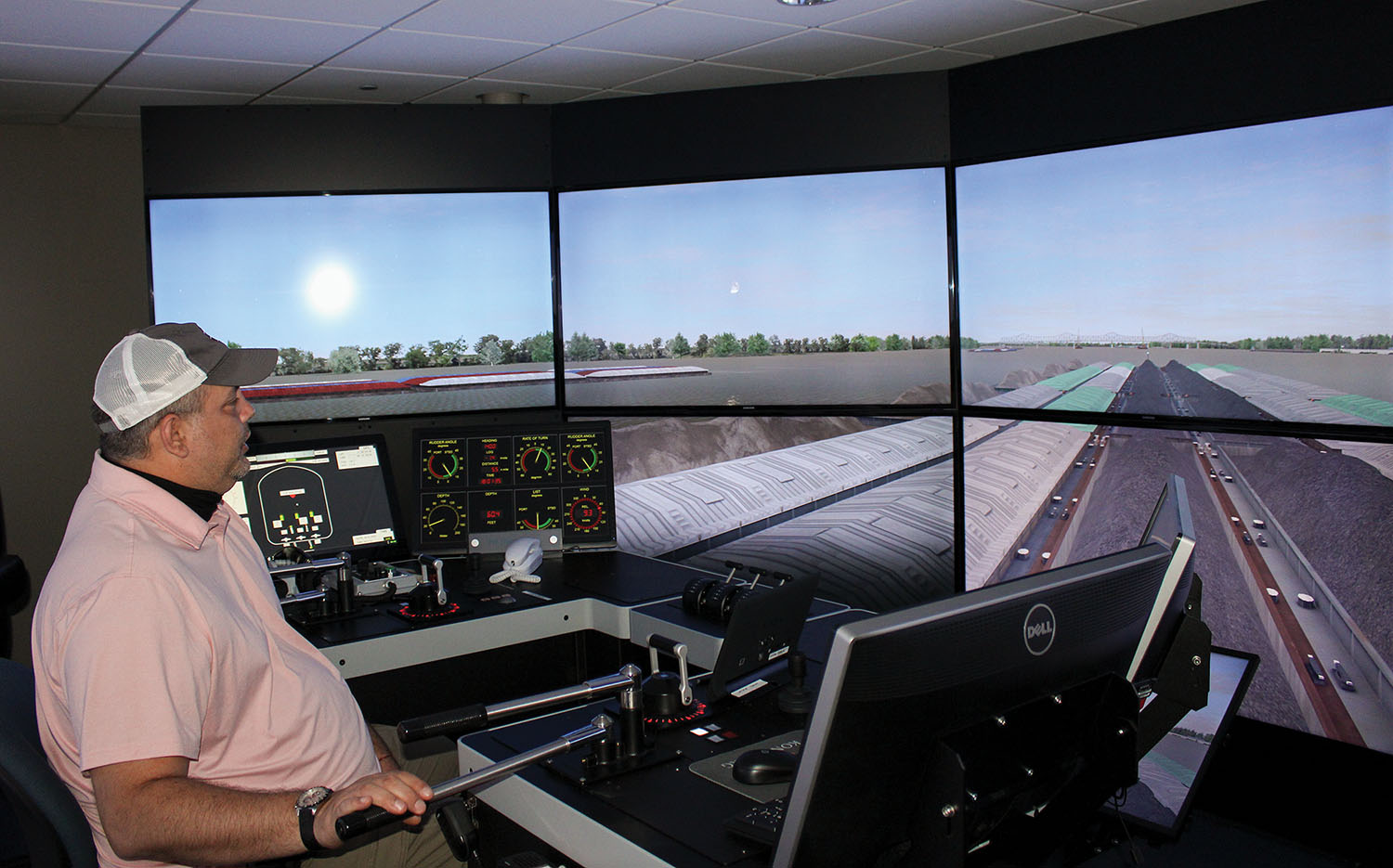 Experienced river captains from several companies recently spent a week virtually piloting towboats through more than 100 different computer scenarios, testing alignments and pier placements for a new bridge just upstream from the confluence of the Mississippi and Ohio rivers.

The testing of the proposed Ohio River bridge connecting Wickliffe, Ky., and Cairo, Ill., took place June 1–5 at the Seamen’s Church Institute’s Center for Maritime Education in Paducah, Ky. The simulations are designed to provide a river industry voice to make sure the design accommodates the traffic below the bridge as well as that on its deck.

“We want to be sure we put the right bridge at the right location,” said Aaron Stover, project manager for Michael Baker International, the Kentucky Transportation Cabinet’s prime consultant for the bridge replacement project.

The bridge will replace the existing truss bridge, which is the longest bridge in the state of Kentucky and the westernmost bridge on the Ohio River. It carries U.S. 51, U.S. 60 and U.S. 62. The bridge was built between 1936 and 1938.

Earlier phases of the design process narrowed the options to three bridge alternatives, all positioned somewhere within a 2,000-foot corridor upstream of the existing bridge. Captains virtually piloted a towboat pushing 35 loaded barges in scenarios that placed new bridge piers three different distances from the existing bridge. They also included three different types of bridges: arch, truss and cable-stayed, and bridge spans that were either 800 or 900 feet.

The current bridge’s spans are 634 feet.

“We are increasing that by a considerable amount with any of the options,” said Jason Stith, bridge technical manager for Michael Baker.

As the virtual sessions are designed to increase safety for both people and property, providing the simulators is also in line with the Seamen’s Church Institute’s mandate to care for mariners, said Stephen Polk, SCI’s director of maritime education and training. The simulations should help to minimize any potential negative impact to existing businesses or fleeting operations, he said.

After each run, pilots rated ease of navigability from one to five and listed comments on an assigned tablet computer.

Construction of the bridge is not expected to begin until at least 2025 and is anticipated to take three to four years, but Sith said it is important to involve the river industry early in the planning process, noting that transportation officials expect far more commerce beneath the bridge than they do over it.

Ingram Barge Company Capt. Joseph Eubanks was one of the captains piloting a towboat through the simulated scenarios.  He did so by watching his readings on radar and map indicators as well as carefully paying attention to a wall-size projection showing his tow, new bridge piers and the existing bridge, along with crane barges and barges in nearby fleeting areas.

In some scenarios, the piers were in place without navigational lighting, as they will be before a road deck is laid. Captains tried the various alternatives at both high water and low water stages, while piloting upstream and downstream and under both nighttime and daytime conditions. Eubanks said he enjoyed knowing that the feedback he was giving could make a difference to others navigating beneath the bridge for decades to come.