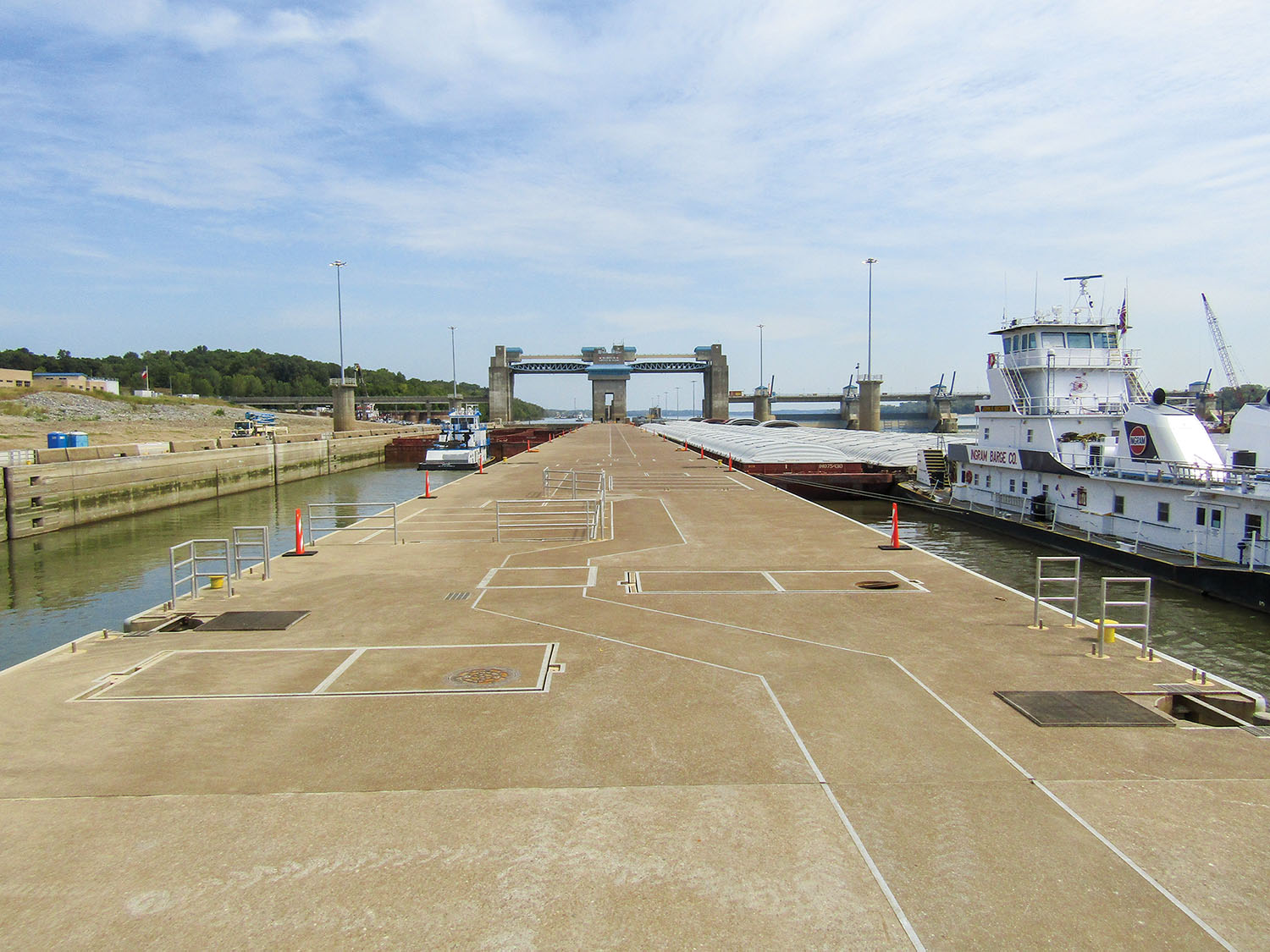 River traffic has locked through the twin 1,200-foot-by-110-foot chambers at Olmsted Locks and Dam for the first time this year and only the fourth time in the project’s history.

“The weather conditions over the past couple of years have been unique, but raising it in June is much more normal,” said Ryan Lawrence, assistant operations manager for the Louisville Engineer District’s locks and dams project office.

Olmsted personnel began raising the wicket dam June 18. It had also been raised in August 2018, August 2019 and November 2019, for a total of about 100 days, Lawrence said. The longest period was in August 2019, when the wicket dam held pool for 62 days at 301.5 feet above sea level, maintaining the pool 46 river miles, back to the Smithland Locks and Dam. A more typical elevation at Olmsted is 295 to 300 feet, based on a hinged pool that takes advantage of the natural slope of the river.

Crews began lowering the wickets June 23 in response to rainfall in the upper Ohio Valley, but Lawrence said they may need to go back up again in another two weeks or so, given current forecasting that calls for less rain and a falling Mississippi River.

The Corps said it expects to raise and lower the wickets an average of four times each season.

“But so far we haven’t really had an average year,” Lawrence said. “You do what needs to be done to maintain the river elevations.”
Given the weather so far this year, the Corps believes this season may be much closer to a typical one than the last two have been. However, Lawrence cautioned, “As we saw last year, there’s no real way to know. We look at historical trends and what we expect with weather patterns.”

Although the Corps had plenty of experience with wickets at the former Locks and Dams 52 and 53, Olmsted modernized the process when it opened in August 2018 on the Ohio River near Olmsted, Ill. In addition, instead of a hook blindly grabbing for a bar on the wickets beneath the water, GPS and a sonar camera aid the process.

“They really took the things they learned from 52 and 53 and implemented and improved those things here,” Lawrence said.
The Corps has less experience using tainter gates combined with a wicket dam to control flow. Olmsted has five tainter gates, while the former projects didn’t have any, although other Ohio River locks and dams in the district have them. The gates can be opened and closed to maintain the pool without raising and lowering the wickets as frequently.

“We’re definitely still learning that,” Lawrence said, adding that Olmsted has a unique combination of factors since high water on the Mississippi River can back up the Ohio to as far as Olmsted and since levels on Kentucky Lake on the Tennessee River, Lake Barkley on the Cumberland River and on the Ohio at Smithland all factor into river levels at Olmsted. Last year, Lawrence said, crews found themselves changing tainter gate settings multiple times a day at some points as they adjusted to all the variables. The tainter gate adjustments help to manage the hydro power peaking from the Kentucky and Barkley dams without causing wear and tear to the wickets by raising and lowering sections of them to control flow.

One thing Olmsted has done successfully is eliminate one of the largest bottlenecks in the inland waterway system, as it was sometimes necessary to break tows apart so they could go through antiquated 600-foot locks at 52 and 53 if the single 1,200-foot lock chamber at each dam wasn’t available. Lawrence said there was no queue to lock through on June 23, as the Corps began to lower the wickets.